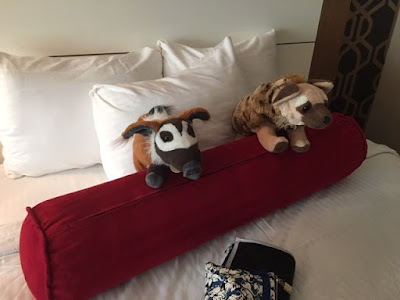 With beach acceptable weather, a rare awakening of just after Stupid O’clock was used for a trip down to the other end of New Jersey.  As usual, we had selected far too many supplies, and squeezing them all into a Korean hatchback required multiple iterations and more than a bit of profanity to hold it all in place.

Anabelle took up the navigator spot, partially to allow Rosa to stretch her leg out and rest her recently broken toes, but mostly to provide travelling entertainment by Pigeon, the dancing red river hog.  There were a few odd side glances along the way, but amazingly no accidents down the performance strip of the Garden State Parkway.

We had an early lunch at the first of the "large enough to be useful" sized rest stops and reached the Tropicana well before they would allow us to check in.  They naturally made us wait on a long line of people before telling us this, instead of posting a sign or something.  Nice.

Having played this game before, we left everything in the car, and went back up to grab the beach stuff after practicing for Disney lines. On the beach, as always, Rosa tanned, Anabelle played Chopped, and I read while trying to keep every square inch of myself out of the sun.

This was aided by the canopied beach chair Rosa bought right before the trip.

This was hindered by us not noticing the missing screw in the canopy of the beach chair right before the trip.

The canopy fell on my head several times, reducing me to dizziness and previously used methods of hiding under a shirt, a hat, and a towel with twenty-three gallons of sun screen spread on me.  We sampled the wares of Joe, one of many beach wandering, cooler rolling ice cream and frozen fruit salesman before the rest of my family entered the waves.

I was too invested in my anti solar cocoon to go, and besides someone had to watch the stuff on our non-room based beach day.

After a while, we dusted off as much as we could (translation- a small fraction) of the beach sand stuck to us, and went back inside to check in. Once the room was assigned, we could grab everything else from the car and haul it into the Havana Tower. Its location right next to the parking garage reducing the amount of haulage needed rendered all the “which tower do we really like to stay in?” discussions as we came in from the beach invalid.

They cleaned the ocean debris off of themselves while I read some comic books.  With only the early (and rest stop level, fast food inadequate) lunch in our systems, a decent sized dinner was required.  Casa Taco met our needs once more, as I was plied for more Disney World trivia to meet another of Anabelle’s needs. This had become a near constant state as the trip approached.

Rosa only ate sides, being the single member of the family who can maintain mental and physical function on the “single meal a day” philosophy.  Therefore she planned on having a funnel cake during the post dinner Boardwalk excursion.

Expecting to steal part of that usually mammoth fried dough offering, I passed when Anabelle got some macarons (yay, Ladybug!) and Rosa ordered her standard, seaside flavored, roasted almonds on the way out.

The main reason for our walk, obvious to anyone who’s ever met my daughter, was a stop at the B-Iconic “giant ring store” in the mall. (The store is small, the rings are giant.)  Once again, we forgot it closes early, or possibly doesn’t open since we’ve never been there early, on Sundays.  Since it was the summer, the stage across from the Convention Center was occupied.  Since it wasn’t late into the evening, the occupant was not an inebriated, vulgar, disposable flatware hurling,racist.  The band was quite good, and fronted by an extremely enthusiastic and shiny woman. 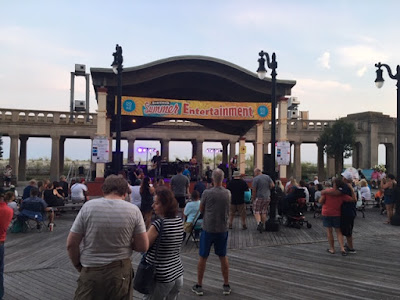 Good entertainment continued on the way back to the Tropicana. Outside one bar was a group covering Quiet Riot. These days, you could probably get Quiet Riot for the same price, but I guess they wanted a variety of songs.

Inside the Trop, the casino edge bar “Tangos” continued their streak of excellent live performances. The woman belting out a Joplin song was top notch, and waiting for the “lottery” pull we’d inevitably lose was made easier by her performance.  What also made it easier was me deciding -since Rosa changed her mind against the funnel cake that I skipped dessert to sample- I was allowed to use the daily Mrs. Field’s coupon for a chocolate chip cookie.

The evidence that the multiple anti-sun layers I employed were as effective as ever could be easily seen since I was wearing shorts. Anabelle helped as we went back towards our room by serenading us with her rendition of “Strawberry Legs Forever.” 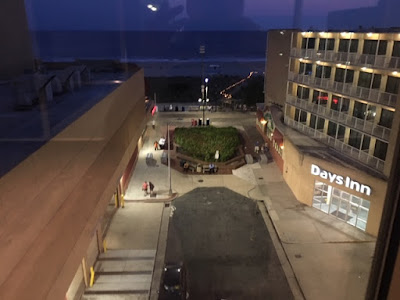 Before heading to our room we did a little exploring in the newly acquired Chelsea Tower. The old hotel became home to a nice view and a bunch of snooty eating establishments we’d probably never visit. Some interesting lounge decor choices set the stage for Anabelle’s spot-on swivel around impression of a Bond villain in the oddly shaped chairs. Our curiosity satisfied, we returned to our much more accommodating tower. 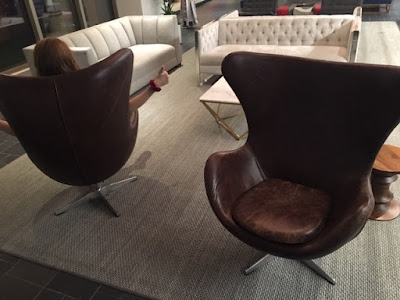 Luckily we were all tired; as the wall mounted TV added in the renovation prevented us from using the portable DVD player we’d brought in the past. Viewing selections reached unprecedented levels of dullness, as we switched back and forth between the lady with trained rats on “America’s Run Out of People with Real Talent,” and Professional Baseball.

Baseball is far more entertaining with my wife and daughter as they are totally unfamiliar with it and answering their questions easily transitioned into a Bob Newhart routine.

Anabelle played hotel a little, since old habits die hard, but the sun and long drive of the day meant we conked out pretty spectacularly.