You Can’t Go Away From Home Again 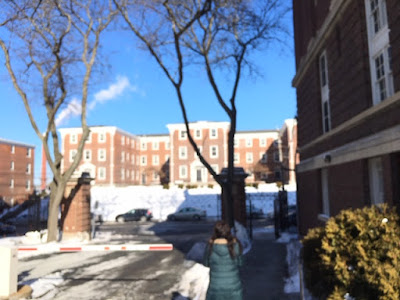 We took Anabelle for an info session and tour of RPI.  She's not really interested in a tech school anyway, and it doesn’t line up with any of her future goals. Still, it was cool to use it as a practice meeting and go back where I spent some formative years- making friendships, learning a career path, and swearing violently at take home vibrations exams.

The site of the old Pike (Pi Kappa Alpha) fraternity house on Hoosick is the Hilton we stayed in.  The frat comes there for a party once a year.  Weird.

The Dunkin Donuts we used to frequent at 2AM to order a dozen between three or four of us, making the donut guy despise us, is now a two story affair.  Considering it closed for part of our college career because someone was running numbers out of it (“The cops’ll never find us here,” said Jesse) I guess “business” is doing well again.

The big Price Chopper supermarket we used to visit regularly at all hours of the day or night (attended by the Chopper Zombie at the really late hours) has been replaced by a smaller "local market" type store. The tiny beer section is right next to watchful eye of the registers meaning there were no offerings to the beer gods, left behind to be replaced by a forgotten six pack at the end of the shopping trip.

The Radio Shack in that same strip mall is obviously gone, but there is still a Chinese place next door to where it was.

Oddly, the only thing that has expanded in that strip mall is the Friendly’s (unlike all the ones that closed down here). Service is still terribly slow, but I guess college crowds will put up for that for ice cream.

Since the hotel was up the road, we walked to Friendly’s, generating a huge college time flashback.  This was enhanced when we had to walk back in a giant snow squall that came out of nowhere. Welcome to RPI! 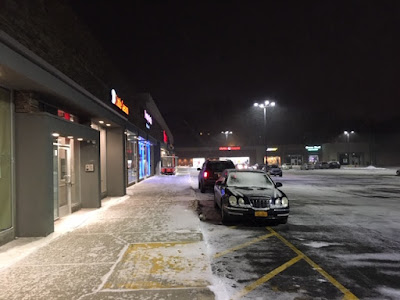 The management school outgrew the Lally building and has a new location.  However, a lot of departments are still in the same places.  Humanities and Social Science is in the Sage building, Computer Science is in Amos Eaton, the Math Department is in the same building where I took Diff. Eq. and therefore blocked out the name, and the Johnson Engineering Center is the same.  UPAC movies are still shown in the biggest lecture hall in the Communications Center CC308; with newer films Friday old ones Saturday. However, there is a little coffee shop in hall outside the lecture halls. That would have gotten in the way all the times I ran down that hall when jacked up on a dozen Mountain Dew's at dinner the night the Juggling Club sponsored And Now for Something Completely Different.

The CII (Low Center for Industrial Innovation) is still a tall white building filled with classrooms, and the glossing over it on the tour made it feel like it’s central purpose remains as undefined as it was twenty-eight years ago.

There's a new row of new, fancy enormous buildings on the far side (Going Away from the E-Dorms.) of the Johnson Engineering Center (as stated - still the same), Voorhees Computing Center (still in the old church, now more of a repair and printing center since terminals are old and crusty like me) and the Library (Still a 70’s era ugly architecture building, but more digital media now). The new buildings are: one is for Biotechnology, one contains  giant science research labs, and one is a new theater and experimental media building.

However, student class labs for chemistry and physics are still in the same crappy old labs in the crappy old buildings we used way back when.

Every time I pointed out a new building, Anabelle helpfully suggested. “Well, didn’t you live in caves when you went here?"

There’s a new stadium up by the hockey arena. That meant the '87 Field isn't a football field anymore.  The embarrassing part is we walked past it multiple times and it wasn’t until the tour finished and we crossed it to look at the E-Dorms that I realized this change. The moment:
“See, that’s the ’87 Gym where the juggling club met, and still does I thi…
HEY WHERE’D THE FOOTBALL FIELD GO?” 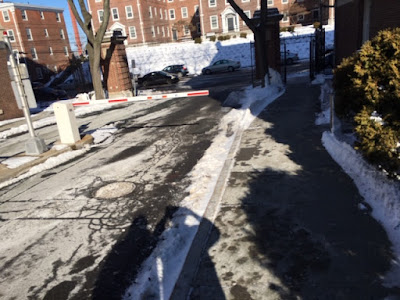 Yes, the juggling club is still going.  We had a lasting effect on something there, at least.

Everyone stays on campus the summer between Sophomore and Junior year and then does a co-op or studies abroad one semester Junior year.  That may have been a deal breaker for me back in the day. 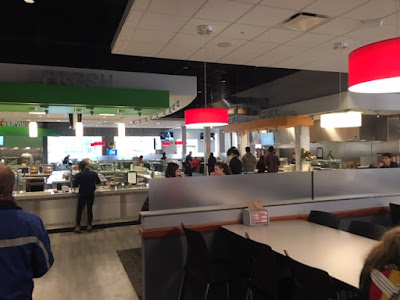 The old Commons dining hall was completely redone. It looks schnazzy now with multiple complex offerings at different stations.  A far cry from the brick, high school cafeteria looking building with a big flame pit grill at the center back wall, where they would give me the once a month steak on the dining plan nearly raw...YUM!

The Freshman dorms, however,  look identical to when we lived in them. They showed us Nasson 2, a real room, not a demo like some other colleges I could name.  If you changed some posters, it could have been our room on Bray 1 in 1988. 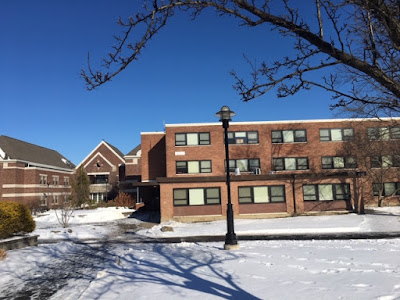 Downstairs in the Union got a fancy upgrade too.  There are multiple food places now, but the old Mother's sign is still there. Sadly, the bowling alley and most of the arcade is gone. It was closed but looks like its only pool tables and one video game cabinet. (Trivia I think.)  When Brian heard, he asked the question I thought, “How do students survive without pinball and bowling?”

The McNeill room upstairs, though, is completely unchanged- flags and all.

It was a holiday (Martin Luther King) and locked doors and a fading memory meant I couldn't find my way down to WRPI in the brief time we had...alas.  I’d have liked to see all the buttons again.

We went the wrong way to go home and passed through Downtown Troy. Anabelle’s assessment was the same as mine when I went there. “It looks kinda dead.”

One thing I’d like to point out from these college tours.  A school that is immensely proud of the “liberal” in its Liberal Arts classification was also immensely proud of how well rounded their education made the students there. It was pointed out, before graduation the well roundedness was obtained by being required to take three Humanities, three Social Sciences and three Natural Sciences and Engineering.

Side note, if I hear one more business/ communications major tour guide give the “Science is hard,” answer to questions about those majors my head is going to explode.

To return, that’s three technical classes and a total of six H&SS courses for these “well rounded folks.”

RPI’s requirement remains the same as when I was there. (Yes, in caves.)  Along with core technical courses for the major (which would be far more than three), students must take one Humanity or Social Science each semester.  That’s a total of eight required H&SS courses for us single minded engineers.

Very enjoyable Jeff! Yay juggling club! You cannot overstate why legacies like that continuing are a great thing. The a cappella group in law school that I joined in its inception year, 'Wand'ring Mistrials (yes that was our name) folded about 5 years after I left I think. Which was very sad, we were so happy about doing something fun and new! And happy to hear about the beginning of Anabelle's search and looking forward to hearing more.

You know by now how much I admire your writing. Your descriptions brought RPI alive to me.BUt more importantly, you reminded me oF all he college trips I shared with Charles and lisa before deciding on their colleges.
It was fun reminiscing Also, becAUSE OF CORONAVIRUS I have TIME TO READ YOUR EnTiRE Blog
gREAT WRITING.

Both of you, thank you so much for reading and commenting and the compliments

Antonia, it was really cool to learn it was still going. There was even a time in the past where they became self sustaining by doing paid performances. (We were an all volunteer group. Not sure if that makes us more altruistic, or dumber.) Love the singing group's name by the way.

Cousin Helen, glad you enjoyed the vicarious trip and the flashbacks. I learned almost all I know about the process from you anyway. (Including the valuable difference between eye contact, and the stare of a deranged maniac) ON a complete coincidence, I have travelogue's lined up for Monday posts all the way through August, so reliving these trips is helping me too.

{GASP} The Juggling Club hosted a Monty python film after I left?!?!?!

I thought that was the year I ran down the hall with Lucas when I was all caffeined out That would be our Sophomore year. I know you were there when we showed Remo Williams,maybe I'm reversing them. What else did we show?

Only Remo when I was there. There was definitely some kind of caffeine freak during those years... possibly more than one.

This is true, the "all the specimen jars you can fill" nature of the cafeteria with Mountain Dew on the machine made it easy. I know I only had coffee once in college. I was exhausted on a Friday morning I had a group meeting in the McNeil room, and I ordered a large coffee which was served in the same cup as a large soda. We went to the UMASS Juggling fest that weekend and I didn't sleep the whole time.

Thank you for this Jeff! Oh my God the MTN Dew throwback was a real image haha. I was also very entertained by Annabelle's reactions. I have got to get back down there and see this all for myself again. Sounded surreal. Made my day reading this!

Thanx so much for reading and letting me know. Reading "MTN Dew throwback" gave me a flashback. Remember when those specimen jar glasses would fall? If you could catch them before the third bounce they were fine, otherwise they exploded.

Once this unpleasantness ends, we should have an "old gang" meet up there.