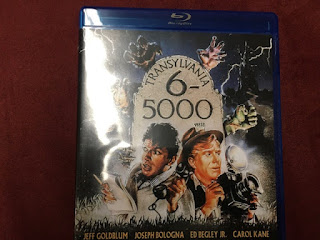 Unlike a majority of my posts, which are almost totally for only my family, this post is one hundred percent COMPLETELY for my family.

Because of this, I have upgraded the media I watch it on whenever I could.

Originally I taped it off cable and replaced that with a store bough VHS once one was available.  Semi recently, I gave up hope that an extra laden Shout Factory Blu-ray would ever arrive, and settled for getting it on a bare bones DVD with other comedy horror films.
It included the ever classic Return of the Killer Tomatoes. (So I needed the set anyway.)

However, a Blu-ray was just released with a commentary by writer / director Rudy De Luca (who often wrote for Mel Brooks, but this is his only directorial credit) and Visual Consultant Steve Haberman.  It’s a newly remastered transfer, looking and sounding fantastic.

Learning more about this film that has been part of my life for so long made the upgrade an excellent part of my Fiftieth birthday present (Thanx Mom!)

Instead of babbling on to each of my family members individually about it, I'm going to write everything I learned here to save time.

The rest of you, come back next week for more Disney Planning and Travelogues, which again, are mostly for my family but I've been told have a bit of overall appeal as well.

I have no idea when the commentary was recorded. I haven’t seen it listed on any other release, but some of what they say makes it sound older, and a DVD commentary has been cited on the Wikipedia page for years. It must be from a version I didn’t find, which is odd since I've been perpetually in search mode concerning this film for almost 35 years.  I can’t find any credits for Rudy De Luca after 2012 online, so I have no idea what his status is either.

Don't worry, this isn't only "didn't know that"s which I still don't know.

Anyway, on to the movie that has permeated so much of my life.  Since I’ve done these before for another Italian director, I figure I have a precedent.

Steve Haberman was a young film school graduate, tasked with helping first time directors make their films "look like movies.”  He ended up Rudy De Luca’s writing partner and they worked on Dracula Dead and Loving It and others together, before he directed his own film.

I knew it was filmed in Yugoslavia because Dow Chemical had money tied up that had to be spent there and they financed it through New World. What I didn't know is it was a hundred percent filmed on location, including the office scene with Normal Fell which was filmed in a hotel room.  There were no sets at all, making adapting to filming everywhere  “on the fly” accomplishments.

The idea behind the film, which is kind of obvious to the few of us who’ve seen it, was to make a modern Abbot and Costello Meet Frankenstein.

Rudy De Luca started out in a comedy team with Joe Bologna, and they remained friends, later Art Metrano joined the two of them.  I had no idea there was that level of "old time Italian comedians I know" convergence.

The film was originally written for TV in the late 70’s.  De Luca had Tom Hanks and Peter Scolari from Bosom Buddies in mind as leads but the studio didn’t know who Tom Hanks was.
Good move there, guys.
They also passed on Paul Riser, not knowing him either.

The studio suggested Jeff Goldblum. He was friends with Ed Begley Jr. but they hadn’t worked together before. Ed knew Michael Richards, laying the foundation for the tallest cast Rudy had ever seen.

Richards was 6’3”, the other two were 6’4”, then they added Donald Gibb as Larry Malbot, Jeffrey Jones as the mayor (both also 6’4”) and six foot Gina Davis in spiked heels.  Six foot one Joe Bologna felt short on set.

Both commenters expected Theresa Ganzel to become way more famous than she did afterwards. I can see why. The movie is ridiculous, and she makes a lot of goofy faces.  However, watch the scene where “Frankenstein” carries her unmoving, sleeping daughter back to the town. Her wordless playing through various emotions from terror though grief and relief is incredible.

Everyone else was Yugoslavian,  including contonrtionist Dusko Valentic, many learning their lines phonetically. That includes little Sara Grdjan as Laura. She did a heck of a job.  (Though, there was some debate that she had been looped, between Rudy and Steve.)

Petar Buntic (Kurt “Frankenstein” Hunyadi) was also the stunt coordinator, which came in handy as most fight scenes were with him.

Michael Richards improvised his actions and general weird things. ("Smell this, is good.")

They brought him to a department store before filming where he bought almost all of the props he used in the film-
the hand, the leg, the bizarre coin operated riding giraffe thing and so on.

The exception to this is the weird little doll he makes box in his opening scene answering the door. He already owned that.  Rudy commented he had no idea what he was doing with it, and neither did the audience, but it was funny.

John Byner (Radu) would entertain them all on location doing various (off color) impressions. He and Carol Kane made up most of their interaction dialogue and actions, including the kitchen scene.
“What’s that for?” “It’s for youuuu.”

Lupe was supposed to be all cobweb covered and misshapen, adding logic to why Radu rejects her most of the film.  Carol Kane didn’t see it that way, giving us the cute, wonderfully insane Lupe we got, and a funnier interaction between the two.

Joe Bologna was also a replacement. Rudy’s original choice for Dr. Malavaqua was his other friend Dick “Snow Miser” Shawn but he wasn't available. That would have been a whole different type of awesome, but probably a much less Italian one.

Speaking of ad libs... and Italian-ness:
Mr. Bologna contributed two key inspirations to the film.
A) He made up the crazed speech about his father being remembered for bringing herpes to Sicily.
B) He also coined the oft repeated (in McGinley households, anyway) term “Nympho-knees.”

Dr. Malavaqua’s lab was in a stable, a smaller stable than the stable they shot the stable scene in, making it very difficult to shoot with all the equipment. They wondered themselves why they didn’t switch stables. Probably due to being rushed.

Joe Bologna got a little too into the scene where he was strangling Lupe and Radu. Knowing that, it obvious in the expression in Carol Kane's face.  Amazingly they stayed in character, and the scene works, but she was mad at him the rest of the shoot.

The producers and studio were constantly pushing to rush everything, restricting shot selections, amount of allowable camera movement, etcetera. Steve kept pointing out they hired him to “make it look like a movie” then prevented him from doing just that to cut time and money.

The “Looking for Laura in the woods” scene where the monsters appear was supposed to be atmospheric and scary, shot at night with fog. The studio didn’t give them time to shoot at night, and the local techs set the fog machine downwind from the filming location.

Many Yugoslavians extras were locals, but some key parts were experienced performers.

Božidar Smiljanić, the police chief Inspector Percek, had been acting since 1953. He went on to a load other Croatian and Hollywood productions.  But for this one, they didn’t tell him they were making a comedy to get his attitude right.

Inge Appelt has acted in over eighty films in her life, and is still going. She was only forty-two when she played the ancient fortune teller Madame Morovia. ("Then dooooooon't jump off.")  Overall, the make-up they got outta that budget was pretty fantastic.

The movie was not a success when it came out, though it did make more than double its tiny three million dollar budget.  However, Rudy was happy to point out, especially with how many great cast members it had, that it developed a cult following and broke some video sales records.  He must have heard of my family!

This was the film Jeff Goldblum and Geena Davis met on leading to their marriage in 1987.

It led to something else.  Mel Brooks came to the premier and sat with his friend Rudy along with the two of them.  He was inspired to cast them in the 1986 version of The Fly his company was producing.

More proof that Rudy and Mel are friends. Rudy wanted a shot of his bare butt when he’s discovered as Lawrence Malbot in the bushes, and to show Ksenia Prohaska's (the post-surgery mummy “Ugly Hattie”) “Bazonkers” on screen.  The studio wouldn’t let him to keep the PG rating.  He maintained both would have been extremely funny.

Since it was his first (and only) time directing, many of the cast gave him a hard time about decisions and plans.  Rudy’s overwhelming advice, given in several forms during the commentary was:
“Don’t have your directorial debut be an ensemble comedy film.
Do something with two people sitting at a table…
NOT in Yugoslavia.”

Well that’s all I’ve got.

Now do over heah….I’m helpin you!