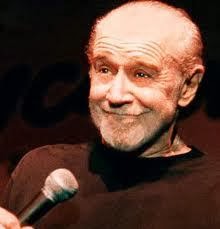 Welcome to the home stretch of the original incarnation of the George Awards.  With the specials finished, today we’ll be starting the top ten most entertaining and also appropriate uses of the word “shit” in a motion picture, as judged by how much I like them, and absolutely nothing else.

The list proper only includes the pure form of the word, however, before starting I need to give an honorable mention award to Steve Martin’s The Jerk (1979).  Navin Johnson was woken up by a dog, and decided it was warning of a fire. He managed, barking along with the dog, to evacuate the motel and get the fire department there…except there was no fire, or any danger at all.  A helpful motel guest suggests a better name than Navin Johnson’s original thought: 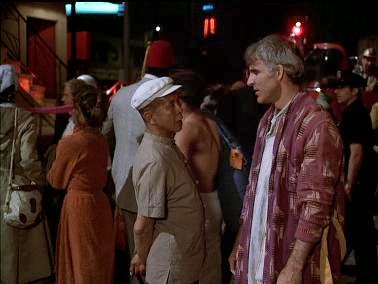 While the moment was grand, it improved by Navin agreeing and then using the name for the rest of the film. In the TV version it was changed to “Stupid,” making it about 73% less funny.

Martin went on to play Vincent Antonelli in My Blue Heaven (1990) and mention a dog he once had named “Vaffanculo" (i.e.“Fongool”)  The man’s penchant for great dog names earns him the award.  It also makes up for my forgetting about his stellar, “Fuck you!” to the supermarket clerk that wished him to, “Have a nice day.” in that film. 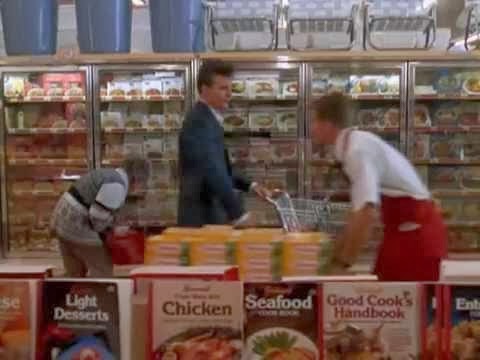 Another honorably mention in the compound word category must go to John Carpenter’s 1986  Big Trouble in Little China.  While the film uses both “Shit” and “Holy Shit” expertly as the proper reaction to all the crazy supernatural events surrounding the characters, the George is for a much more subtle moment.  The farewell exchange between Jack Burton (Kurt Russel) and Wang Chi (Dennis Dun) shows the true level of their friendship and their accomplishments by the use of this particular compounded profanity, in a quiet callback to the early moments of the film. 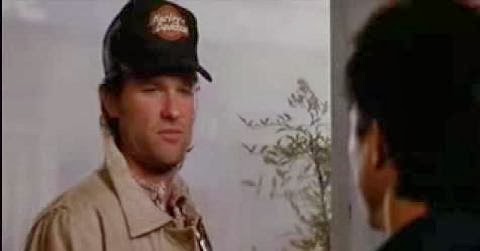 Jack: “We really shook the pillars of heaven, didn't we, Wang?”
Wang:  “No Horseshit, Jack.”
Jack: “No Horseshit.”

One more honorable mention before getting to the list proper, which will contain ties, because:
(A) This is my favorite word.
(B) This is my list.
(C) Tough Shit.

This one isn’t quite George Award worthy compared to the others, but I liked it enough to keep adding ties and honorable mentions to reference it.

From 1984’s Ghostbusters:  Winston Zeddmore, played by Ernie Hudson, delivers this compelling explanation to the mayor as to why he should accept the supernatural nature of the events occurring in New York City. 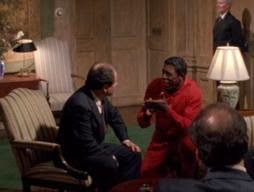 “I've only been with the company for a couple of weeks,
but these things are real.
Since I joined these men,
I've seen shit that'll turn you white.”

On to the George Awards for the top ten entertaining and appropriate uses of this word, or the Shit List:

The list starts off with a tie for the 10th place entry, one each of literal and figurative uses of the word.

The literal use tied for number 10 comes from an unusual source.  The reasons former Beatle Ringo Starr decided to play Atouk, the titular Caveman in 1981’s prehistoric comedy may forever be shrouded in mystery.  Considering how few words the film has in English, as it is all in a made up “Cave-Speak” it’s pretty amazing that it is getting a George Award at all.  Then again, since writer Rudy Deluca is a compatriot of George Lifetime Achievement winner Mel Brooks, maybe it shouldn’t be surprising.  When pint sized Taa (Cork Hubbert) reveals what the “mud” the rest of the tribe was digging in to look for him was, Evan Kim, playing Nook – the only English speaking member of the misfit group – sums up the situation well. 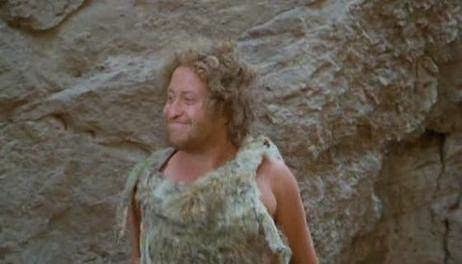 The tied for 10th figurative use brings one of my favorites onto a list again Mystery Men (1999).  This time it’s the hilarious Hank Azaria earning the honors as The Blue Raja, Master of Silverware.  When he learned the legend of Mr. Furious lifting a bus was highly exaggerated, his response was low key, in character, and justly profane:

Let’s have another tie for 9th place.  After only an honorable mention previously, the first of these goes to Harrison Ford, as he picks up his first real George Award for Indiana Jones and the Temple of Doom.  1984 was apparently a good year for this curse.  My daughter was horrified at the hero using this language after almost two full movies of only the lowest level profanity. However, I assured her that when suspended on a tiny rope bridge hundreds of feet above a crocodile infested rives, and surrounded by armed assassins on both sides, the exact proper response was a different delivery of the previous winner: 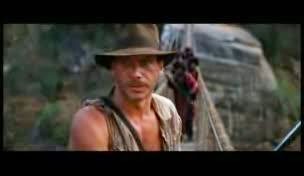 To continue uses of the expletive version of this word, the other 9th place George goes to 1983’s Doctor Detroit.   There are many (many many many) star quality uses of profanity in this film, and if I had watched it sooner in the process, it would get more than a tie on the last list.  (Did I just reveal too much of my process?)  The George winner that stands above the others:  Fran Drescher as Karen “Catering” Blittstein suggested nothing less than total control of the situation as she informed Cliff (Dan Ackroyd) she could handle his party for the college investors. After hanging up, she suggested the feeling we’ve all shared after promising a larger result than we are capable of:

“Shit!
I don’t have time to cook, I’ll have to improvise something.”

Everything worked out for the best though. 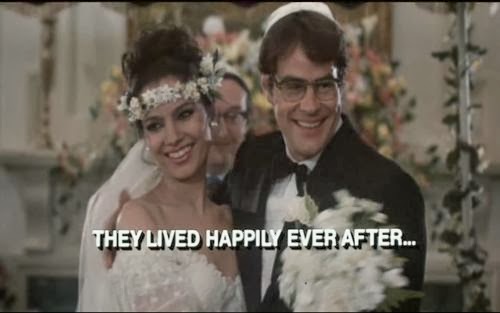 Switching gears, number 8 is a literal use, and goes to those comedy pioneers, Monty Python.  Their Holy Grail film from 1975 became the “holy grail” of comedy.  As always, the highly educated Pythons infused intelligent social commentary into the ridiculousness.  A prime example is when the Dead Collector (Eric Idle) informs the man played by Special George Award winner John Cleese that a passing individual “must be a king.” When asked why, the Dead Collector sums up the differences between the top and bottom classes in most societies: 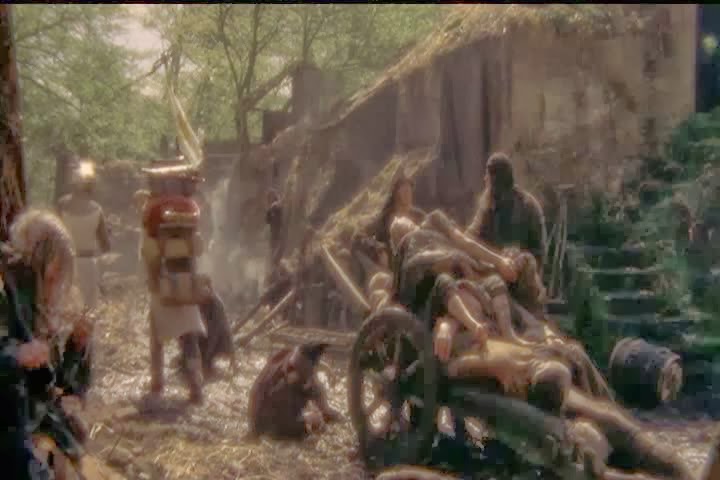 “He hasn't got shit all over him.”

The first Predator helped Arnold win his Hat Trick George, but its 1990 sequel is in the number 7 spot for this list.  Sylvia Kauders reactions to the monster’s howls as it administered first aid to itself in her bathroom were high comedy, especially when she scampered off only to return with a broom.   When Mike Harrigan (Danny Glover) crashed into her apartment, startling the creature and sending it smashing through the door, he tried to calm down little old lady Ruth by telling her “It’s OK, I’m a cop.”  Her award worthy deadpan response was a highly accurate assessment of the situation: 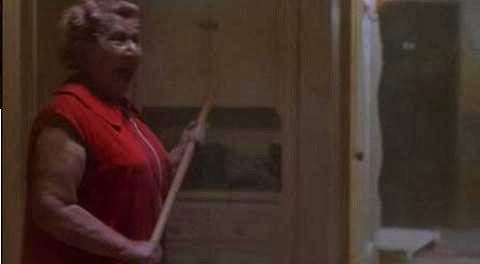 Number 6 is one more George Award going to 1985’s Transylvania 6-5000.  It’s embarrassing how much I like that film, yet another by Mel Brooks’s crony Rudy Deluca.  This time, the line comes from Joseph Bologna as Doctor Antonio Malavaqua.  His transformations between being kind and rational, and a stereotypical mad (if still very Italian) scientist : 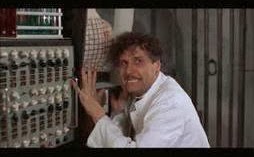 “Lightning,?
I  donna work with Lighnting,
I work-a with all this other shit!”

Come back next week for the highest honors of this Shitty category.
Posted by Jeff McGinley at 2:00 PM