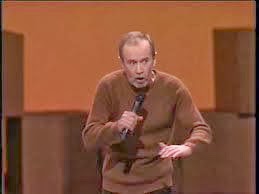 Welcome to the beginning of the end of the first appearance of the George Awards.  Now that we’ve finished with some lighter weight entries it’s time for my personal favorite:
“Shit.”

A reminder of the empowerment of this word when compared to stronger choices, given current climate conditions, is probably in order-

“Holy Shit its cold!”
May generate just enough adrenaline to help one tough it out for the remainder of Junior’s early morning winter sporting event.

“It’s fucking freezing!”
Means the little bastard’s on his own and probably walking home.

Before going on to the top ten most entertainingly appropriate uses of “shit,” it’s time to reference it in the presentation of the coveted George Award for Lifetime Achievement in the Use of Profanity.

This award can only go to one man, Mel Brooks.
Honestly, when began working on these lists, one option was to pull them all from his films.

The award could have just as easily been called “The Mel.” 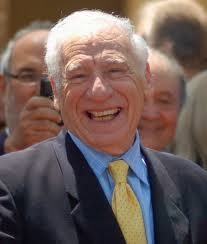 His movies have taken top tier, or special award spots for all of the previous lists.

On top of that, the fun and frantic uses of “shit” in his movies are plentiful enough to overfill the top ten spots all by themselves.  Therefore in tribute to Mel Brooks, outstanding, profanity filled career, let’s take a moment to enjoy some highlights (but clearly not all) of the man’s “shit.” 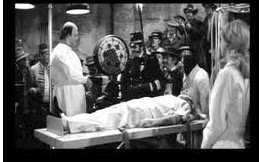 “Let us go to my flat for a little spongecake, und a little wine…
*POP*
und shit!
TO THE LUMBERYARD!” 1981 History of the World Part 1: the special George Award winner for “fuck” also has some excellent “shits.” 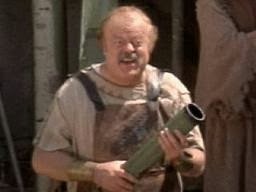 “Yes, citizens, plumbing!
It's the latest invention to hit Rome!
It moves water from one place to another!
It's astounding, it's amazing!
Get on the bandwagon!
Pipe the shit right out of your house!”

And this marvelous exchange where the irrepressible Bea Arthur as an unemployment clerk who cut to the chase about the career path of “stand up philosopher” of which the “sit down version” still exists today:

Mel:  “I coalesce the vapors of human experience into a viable and meaningful comprehension.” 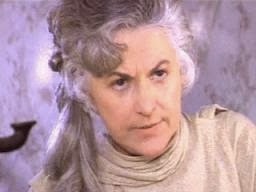 
Late addition!
I almost forgot the "famous for only this line" Hunter von Leer as Roman Lieutenant Bob:

"MOOOVVE THAT MISERABLE PIECE OF SHIT!"

Mel himself got off three outstanding ones.
As the writer and director, he must get first choice of prime “shit.”

As Comicus, in a panicked stand-up routine, he expertly demonstrated how sometime our mouths can get way ahead of our brains, until it’s too late to stop them: 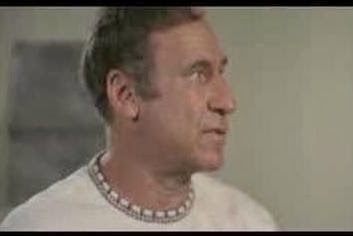 The other two come during the French Revolution.  Jacques, the phony king had a truly open and honest reaction to seeing what happened when they, “Test the guillotine:” 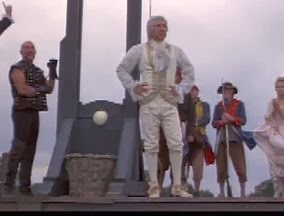 The far greater use, however, came slightly earlier in the scene when he was still playing the actual King Louis the XVI.  An advantage of it being “Good to be da King” is that one is unused to hearing ANY remotely insulting phrase.  Therefore his reaction to Count De Monet’s (Harvey Korman) accurate and helpful observation was in character and pants wettingly hysterical: 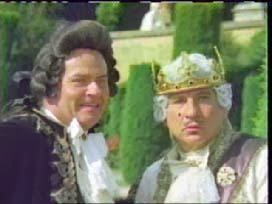 Harvey: “That’s it. Your Majesty, you look like the Piss Boy.”
Mel:  “AND YOU LOOK LIKE A BUCKET OF SHIT!”

1987 Spaceballs – A spoof of a generally PG genre with humor the whole family can enjoy…
But it gets three on this list.

John Candy as Barf (short for Barfolomew) commenting on Daphne Zuninga's Princess Vespa being slightly overprotective about getting her hair shot, and letting loose some automatic blaster fire that was “pretty good for Rambo,” according to Joan Rivers’s Dot Matrix: 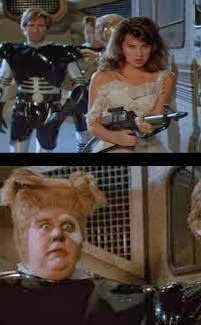 The other two contain not only the quality timing and execution that has earned Mel Brooks his Lifetime Achievement George, but also sci-fi actor cameos, pre and post fame.

The actor detailing the failure to discover anything while literally combing the desert was Tim “Tuvok” Russ before playing the non electrically super powered Black Vulcan on Star Trek: Voyager:

The proper and quiet use of the profanity came during the Planet of the Apes homage at the end of the climactic space battle.  It was spoken by none other than Michael “Logan” York in ape makeup: 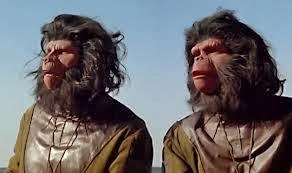 1993 Robin Hood: Men in Tights was one of Mel’s cleaner outings, but made this list for the outstanding exchange (one of Dad’s favorites) between Richard Lewis (Prince John) and Tracey Ulman’s oddly named witch.

The quiet and peaceful citizens of Rock Ridge ended a church hymn with a perfectly sour note and the lyric: 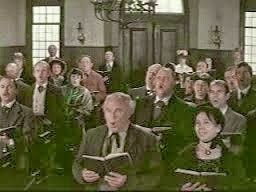 “Our town is turning into shiiiit.”

Hedley Lamar (Harvey Korman) made sure his list of villains needed was in all ways complete
: 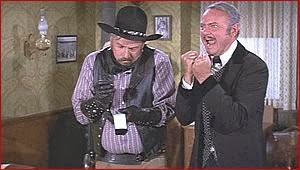 The townspeople who performed the singing version, gave the proper response to (Cleavon Little) Sheriff Bart’s overly pretentiously heroic exit speech.  This was referenced before the History of the World guillotine scene mentioned above, but only the original is award worthy, however, We have standards here in recognizing the proper use of: 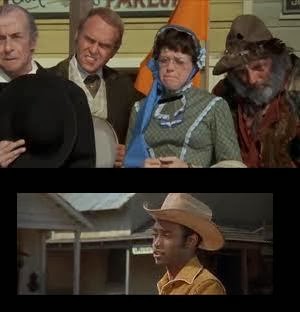 Sheriff: "Work here is done.
I'm needed elsewhere now.
I'm needed wherever outlaws rule the West,
wherever innocent women and children are afraid to walk the streets,
wherever a man cannot live in simple dignity,
wherever a people cry out for justice.
Entire Town: " BULLSHIT!"
Sheriff: "All right, you caught me.
To speak the plain truth, it's getting pretty damn dull around here."

Slim Pickens as Taggart, produced a a suitably profane reaction to one of the Sheriff's more surreal delaying tactics:

"LePetomaine Thruway?
Now what'll that asshole think of next?
Does anybody got a dime?
Somebody has to go back and get a shitload of dimes."

And of course, as this is a major factor in deciding on George Award Worthiness, the one I quote the most is David Huddelston (Olsen Johnson) and his delivery of this peculiar epithet: 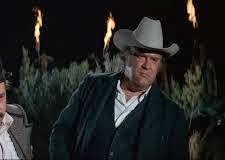 In conclusion, it cannot be denied that Mel Brooks must be deserving of the Lifetime Achievement George Award for he created a movie featuring the following insult, delivered to Madaline Kahn’s Lili von Shtupp, once again, by Harvey Korman:

Mel Brooks – was there ever a man more deserving of recognition as a perfect purveyor of prime and professional profanity? 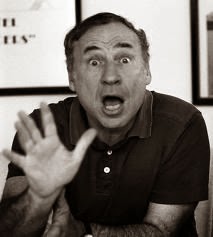 The George Awards Salute You!

One more bonus award, before moving on to the official list.

The Shit For Kids Award, goes to the best use of the word in a movie specifically aimed at children.  It is unquestionably included to avoid the dreaded “G” rating.  Speed Racer had an example of this, but it was poorly placed as an obvious post dub since they felt the overuse of ass wasn’t going to cut it.

The award winner placed it much more accurately and entertainingly.  Apparently slaughter and limb ripping violence doesn’t count to the MPAA when it is robot on robot.  Parents were already due for a horrible shock at the death of Optimus Prime, and they certainly weren’t prepared for Spike’s completely justified reaction to the explosion of an entire moon failing to affect Unicron. 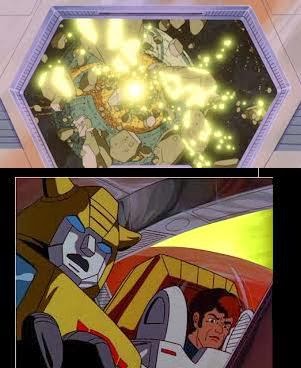 “It isn't even dented!
Oh shit!
What are we going to do now?”

And don't miss Thursday's special tribute to the original RoboCop.
Posted by Jeff McGinley at 2:00 PM

The Wire and Clay Davis need some kind of mention
http://www.youtube.com/watch?v=70eU840lc38

When the George Awards for TV Shows gets done sometime in the future, it will have heavy consideration.

Thanx for the recommendation.