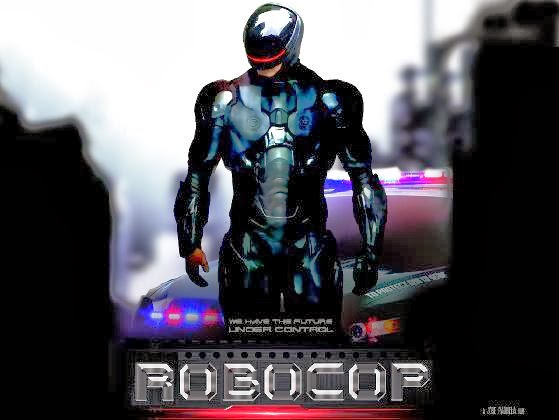 What an amazing theatrical experience!

A perfect mixture of over the top action and humor, with heavy doses of satire and commentary on important issues concerning society, interpersonal relationships, and the reduction of television shows into one note jokes!

There were nostalgic nods to the past mixed in with high end effects used to create situations never before seen on the big screen!

A fun and freewheeling thrill ride of a film that had a strong emotional core about the most important parts about individuality and human connections!

But enough about The Lego Movie… 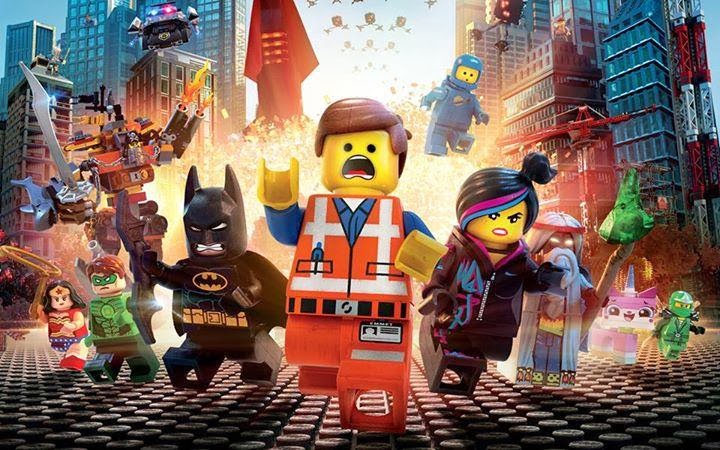 It makes perfect sense that losing most of his physical body, and having his mental processes altered by computer chips would have a horrendous effect on Officer Murphy’s psyche.  The separation from his former life, the inability to have normal contact with his family and the question of whether his soul survived the process were all valid points.

Being denied control of his very movements, thoughts and emotions by corporate interference would make undergoing the transformation into a few physical remains supported by an unfeeling metallic suit into a living nightmare.

While all of that makes perfect rational sense, and could provide seeds for an interesting story, it leaves out something that was one of the key ingredients in the appeal of the original.

The Eighties were stupid in many ways.  (Many many many ways.)

But dang it, we could do awesome.

The whole “suit me up” feeling that permeated my being after seeing the original, and affected my walking style for decades, wasn’t present.

In fact, it felt like nearly every decision they made, whether it could be considered a positive or negative from a story telling standpoint, was designed to suck the awesome out of the film.

The expensive and modern digital effects were used to create a faster, more mobile lead character.  Any time RoboCop was shown at high bursts of speed, it took away from his weight and reality.  The fact that he never needed to rush in the originals added to his awesomeness, and the same goes for Atkins Diet ED-209.  The speed negated one of the few bits of awesome they retained from the original: the sounds of RoboCcop’s servos and footfalls as he walked.  Those whines, creaks and thumps lost their gravity at an increased rate.

The motorcycle was a step in the right direction, but for similar reasons as the walking speed argument above, RoboCop belongs on a futuristic Harley, not a crotch rocket.  Even with the quality drop from its predecessor, 1990’s still awesome RoboCop 2 was smart enough to know this.

Also tangentially connected to the speed increase was the choice of weapons.  Dual wielding is cool, but the use of a standard looking submachine gun along with a taser was a bit lacking in the awesome department.  This is especially true when compared to the hand cannon from the original. The enormous, custom automatic pistol in the 1987 version was awesome enough to have audiences echo the line from the film.

(A line which would have won an award for profanity on this very blog if RoboCop wasn’t disqualified from competing for fear of overrunning every category.)

I understand they wanted to try a new angle compared to the original by reversing the direction of the internal man versus machine battle. In 1987, Murphy was legally dead, and watching his characteristics come back through RoboCop’s exterior defined the struggle of his heart and mind against the OCP commands. In the new film, he starts out as fully Murphy when transformed, but subsequent surgical and programming modifications steal away his humanity.

The problem was that the modifications all made him a better (Robo)cop than his humanity did.  The man making the original machine better than a mere robot was another piece of awesome that was deliberately excised.

That may have come more from the character than his arc though.

It wouldn’t be fair or accurate to use the flippant, “Joel Kinnaman is not Peter Weller,” to insult the movie and the actor.

That would be an accurate assessment of RoboCop 3 and Robert Burke who was attempting to fill the same exact role as Weller.  (And still managed some moments of awesome doing so.)

The problem here wasn’t with Kinnaman’s acting, but what he was told to do with it.  The new Murphy wasn’t all that likeable, and didn’t have much of a personality to begin with.  The passion between the 1987 Murphy and his wife was far more emotionally powerful and visible in the few snippets of day to day interaction shown in that film, compared to the PG-13 safe and interrupted “passionate moment” shown in the 2014 version.  The lack of emotional humanity given Alex Murphy as a person made it difficult to notice if it was in conflict with inhuman, corporate programming.

With the main character dulled down, the stellar supporting cast showed in sharp relief his lack of awesomeness.

A movie I would have loved to see would have been an original tale with everyone else but RoboCop.

It would have been incredibly compelling to see Jackie Earl Haley as the field leader of elite robot squads working for the company run by Michael Keaton, as the CEO who always found a way to get it done, or at least put a positive spin on it.  Really, it was like watching a Dark Business version of Bruce Wayne, except for the climax where he turned both over the top evil and completely stupid to allow RoboCop to utter an iconic line from the original, that felt forced and didn’t really fit the scene.

Sorry, that rant got away from me.

Throw in Gary Oldman as the brains and conscience of the company, and Samuel L. Jackson as the biased narrator.

THAT would have been quite the awesome film.

Finding myself wishing the bad guys were transformed, displaced and left the title character behind was significantly less awesome than the theoretical movie in my head.

Some of the decisions were not only anti-awesome, but just plain weird.

Having Murphy’s partner still be named “Lewis” but making him a guy?

Nancy Allen’s Anne Lewis served as a new emotional connection for Murphy, as he realized his life was now completely altered. He knew he couldn’t maintain his previous normal life, but could still be human on the inside and have an existence with purpose.  As the father of a daughter, I also need to point out she was tough and equal to any male on the force, as opposed to reducing the main female character to the complaining wife / damsel in distress.

Michael K. Williams’s Jack Lewis was a stereotypical cop buddy.  He was a staunch ally, but separate from most emotional issues.  The new movie’s emotional journey focused on how a head, organs, and a hand in a can, that needed to sleep plugged in to a lab table deserved to reconnect with his wife and child, despite having no hope of returning to normalcy.

Futile, destined for tragedy, and not awesome.

And let’s talk about that hand. I do get that they were showing the only human parts left were the ones that (the more awesome than the whole remake) Clarence  Boddicker shot in the original.  However, the hand looked plain silly, both poking out of the suit, and hanging in space without it.

There were odd musical choices as well.  My hopes ran high when I heard a snippet of Basil Poledouris’s classic score remixed at the start of the picture.  Unfortunately, that remained in the background, seeming to be the theme of the show within a show The Novak Element.  Instead they used Rock ‘n Roll for many action scenes.  I will agree that Rock ‘n Roll can be awesome, though a full classic orchestra is often more awesome, especially for certain iconic characters with an established leitmotif.  With the right song choices, the music switch could have worked.

But “Hocus Pocus” by Focus?

Movie guys, listen up.  Unless the hero is a singing Roy Rogers or an animal calling Johnny Weissmuller, yodeling is not the right choice for added awesome.

The original was known for awesomely pushing the limit on the violence and language as part of both the action and satire.  The lower rating would make sense to bring in a wider spread in the ages of movie goers.

Why then did they make it a much more bleak and dark, and less fun picture?  ED-209 shooting an incorrect person in the original was disgustingly, impressively, and wonderfully violent. It was also hilarious as hell in a twisted sort of way.  A similar ED-209 shoot up in the new film, was dark, tragic, and depressing.

And hiring Samuel L. Jackson, a man who is known for the awesome delivery of profanity, and shackling him by not only the PG-13 rating, but also making him play an annoying TV Pundit? That meant his only profane expressions were bleeped out.

In fact, one of those trademark expressions was delivered quite expertly and accurately by Bob Morton in the original when describing RoboCop.

Plus, replacing all the witty and entertaining news briefs and ads with his parts were another major drop in awesomeness. Because he is an awesome actor, casting him to play an annoying part meant he came off as annoying, not awesome.

The biggest upside of the remake is the release of new t-shirts, toys, and a  high end blu-ray of the original.   Now if only the original sequels could get the same treatment for a three pack, chock full of remastering and extra features. Like most of my favorite films, I’ve owned the series long enough to only have them on VHS. High enough quality increases make upgrades worthwhile.

As for current theatrical experiences, do yourself a favor.

A film that deserves its theme song, because it truly embodied, “EVERYTHING IS AWESOME”

Totally agree with your comments on the LEGO movie. Funniest movie I've seen since 'Silent Movie.' And the very diverse crowd loved it as much as I did.

It really had everything.

and the best movie theater Batman since "Mask of the Phantasm."

Finally got around to watching this.

You're right, it needed an R-rating level of sophistication to convey the themes it tried.

I , and IMDB, noted that Gary Oldman's character is named after Danial Dennett who writes books about the nature of consciousness. I struggled to get thru half of "Conciousness Explained" but I found "Darwin's Dangerous Idea" provoking and not too much of a slog.

Seems like a software play to sell the crime database synthesis tech would have been faster to market with far less capital outlay.

Thanx for chiming in, good points all. I have to look for that book once my pile dwindles.

I wish I had followed your lead, it's always worse when a highly anticipated film is lame in the theater.