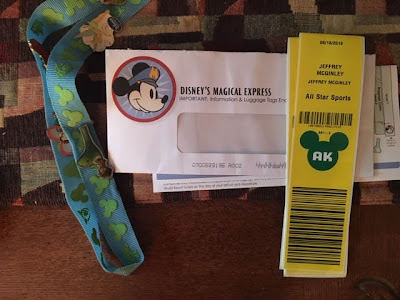 
Important change- Not to the schedule, or dining, or rides.
As of today, we can say:
"This month we are going to Disney World!"
YAAAAAAAAAAY!

Grandma-  I was on my computer a lot today and I got Anabelle’s this morning.
Jeffrey’s just came now. My computer is still possessed.
BUT the idea of the countdown winding down made me happy and ecstatic none the less. OXZ

Kim- We just took a family walk to the mailbox to get ours.   Woot woot!!

Grandma-    I got mine today too and was ‘Hey, Hey, Heying Look at this. We must be getting close.”  to Veronica.  Then I called Kim and said I’m using one of Morgan’s for my third bag.  Each tag has a name and you get two tags for each name.

August 2, 2019
N minus 16
I’ve got all my shirts packed for Disney!
Probably should think about pants one of these days.

Kim has joined in the countdown fun
Kim- 16 days to go…So we celebrated with Mickey pancakes.

Grandma- And they were delicious. I stopped in after I went shopping for a minute and ate two. OXZ 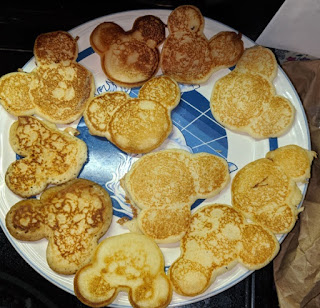 August 3, 2018
N minus 15
The student has surpassed the master. Anabelle has lists, not just for shirts, but pants, socks rings and earrings.
Then she organized them in bags!
I'm so proud. 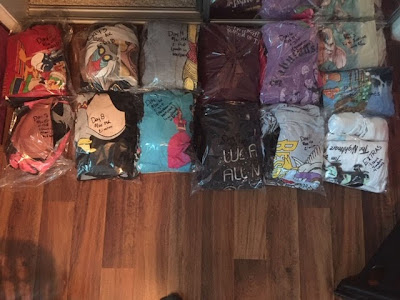 Grandma confirms the flight time changes we heard about a couple weeks ago  when I called to confirm Magic Express and then she changes the limo times.

Grandma also takes point when she realized two weeks is tomorrow (WOO HOO!) and she needs extra Magic Express luggage tags.  A call involves a long explanation of our entire trip causing the awesome happy Disney person to say, “You didn’t even breathe when you said that.”  They, of course, fixed everything and extra tags are coming. They also said how we can work it if it don’t have them. (Magic Express is awesome.)

August 4., 2019
N minus 14
I sent an email to the family asking “Guess how much time is left?” with a link to the “Two Weeks” scene from Total Recall, because nothing says Disney like terrifying animatronics!

I also sent email refurbishment updates:
Primeval Whirl reopen date moved to late September.
Bummer for the spin and vomit crowd.
But this is mitigated a bit by "in two weeks we’ll be in EPCOT and in three weeks in Animal Kingdom."

Kim- Then I'm happy and sad for us, but probably not in that order.

August 5, 2019
N minus 13
Some menus are updated, but nothing major.
Secret pork belly added to Cosmic Rays,
Blood orange clarified as a margarita somewhere,
The Ultimate platter was removed from Flame Tree
(but the sampler still has everything minus brisket)
Pecos bills added turkey legs

Grandma was really excited. I had no idea she was a Disney turkey leg fan.  They’re not in every park anymore. But the American Pavilion still has them in EPCOT and with Pecos Bills added to Tortuga Tavern and the Cart there’s three places in Magic Kingdom.
[Later Edit- I believe after we got back, updates but them in all four parks again.]

August 6, 2019
N minus 12
Grandma bought ten disposable ponchos after checking the weather during the trip.  OK, so it thunderstorms a lot in Orlando in August, but also…
WE CAN SEE THE WEATHER REPORT FOR THE TRIP!!!!!
YAAAAAAAAAAAAAAAAAY!

August 7, 2019
N minus 11
Due to traffic and flooding on the Garden State Parkway, the GPS sent us on a section of the New Jersey Turnpike home from Atlantic City. As we passed Newark Airport. Anabelle said, "We don’t have to go to the airport yet, we have to go in eleven days , woo hoo!!!"