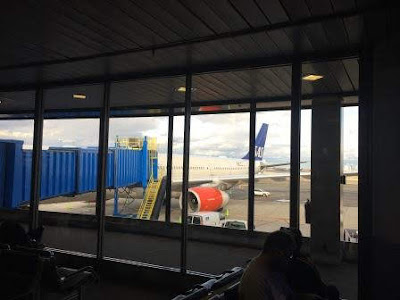 
This was the second time the trip was scheduled. After the first postponement, I was hoping for another more indefinite one...like maybe forever.  However, the fact that I didn’t try to weasel out of it all together speaks to the high amount of pride and job satisfaction I get from working with the brilliant members of this team.

Yes, it is excessively possible that bringing up some shoulder discomfort to my doctor when I went for knee lubricant shots (leading to therapy and exercises for a pinched nerve in my neck) was motivated by thinking if I needed surgery it would fall about when this trip was scheduled...
But never mind that now.

My initial efforts to find flights through our company’s online travel system gave me a list where every trip out and back had at least three plane changes at random international, and possible interplanetary, locations.  Therefore I contacted the company’s travel person directly, citing my lack of experience in travel and my strong desire to not spend the rest of my natural life wandering aimlessly around Europe.

Direct flights were available, but infrequent.  I couldn’t leave the day before, due to Moving Company requirements, and she set me up with an arrival that should have let me just make the start of the first day. The trip home was scheduled the day after our class ended.
Naturally, the schedule was arranged to insure class ended early the last day, to allow travel time.  Luckily, the extras that ended up occurring during that time made it worth being there the whole final day anyway.  And again- not spending the rest of my natural life wandering aimlessly around Europe- huge bonus.

I got to the airport three hours early, per airline demands.  Due to my pocket oriented lifestyle and large belt buckles, security is always a party. I was all the way to the gate before realizing my back up mini-phone charger cord never returned into its assigned pocket.  I walked back to security, described it to one of the agents, and he told me there was one fitting that description on top of the scanner machine.

Then he stared at me blankly for a long time.

I asked if I could have it back, and he told me there was one fitting that description on top of the scanner machine.

Then he stared at me blankly for a long time.
We played this festive game for a bit until one of my, “Can I get it?”s was answered in the affirmative.

I had no checked bags, since I didn't want my stuff to spend the rest of its natural life wandering aimlessly around Europe either.  I couldn’t throw a case of liquid travel caffeine in the carryon and make it through security, leaving me to stop at a stand near the gate for a large bottle of Diet Dew.  My bag had a couple of days’ worth of clothes, a huge selection of reading material, and a large stash of protein bars. The last item was because I had not been introduced to Swedish food sensibilities yet.

Scandinavian Airlines very rapidly and completely demonstrated that the air carrier I usually use is substandard in a large number of ways.

The big ole Airbus plane was already at the gate when I got there.  We boarded on time and with a visible number of empty seats.  I was on the aisle of the middle section and there was no one else in it with me, until a guy from one of the sets of two on the side took the other aisle seat for more room. This still left two seats between us.   Without having to deal with offering people rewards for exiting an overbooked flight, we took off exactly on time.  To continue heaping praise on Scandinavian Air before recounting the flight itself: we landed early, there was no other plane in the way, and I could see my fellow passengers getting their baggage as I passed the carousel. Woo!

Due to the time difference, though we left at early bird special dinner time, it was still a redeye flight, landing an hour before introductions were due to begin the initial morning.  We started the trip with dinner, which was above average.  The main course was still baseline airplane food (that is borderline edible), but there were enough tasty and prepacked sides and snacks  with it to allow me to fill up on a cobbled together sandwich and some other bits.

I read an entire Gail Simone oversized Deadpool Classic collection and a chunk of the First Season book that came with the Monty Python Norwegian Blu Ray edition. This is normal behavior for me on flights, since I don’t sleep.  However, as this was serving as my “night” before the class I was helping to teach began, I decided a change in behavior was needed.  I closed the books, shut off the little spotlight, put in my mouth guard, and played some music in my headphones to create familiarity. The decision was made that, since I can normally fall asleep anywhere, anytime under any conditions, I must be able to sleep on an airplane if I really needed to.

I'm so excited to read this.

It was not by choice.

I'm glad someone is excited about it.

(Actually it went very well, but I get deeply paranoid about travelling away from my family.)

I'm paranoid about stuff like that too (traveling away from family).

I can relate to not being able to sleep on planes. Or maybe we talked about this already. I'm having some vague memories.

Possbily, but its been a long year, so talking about it again is fine.

The odd part is I'm completely calm once I'm on the plane and its going, which is contrary to almost everyone I'm sitting around. So I get to be the voice of reason until we disembark, then I freak again.