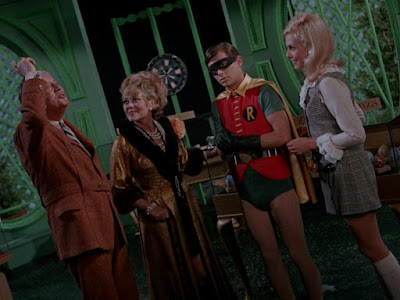 
On Glynis Johns playing Lady Penelope Peasoup:
“Shouldn’t she be off

On the constant generation of fog:
“How many times does this story have man made fog?
It should be a drinking game.”

On any mention of places like “Ireland Yard,” or “Chuckingham Palace:”
“what.”

On Dick travelling with a thousand key works of literature, bio specimens and his desk:
*Random flustered noised*
We find out it’s really the Batmobile:
“Ooooooh.”

On the Batmobile not passing a sign that says, “Londinuim 14 Miles:”
“I feel ripped off.”

On the comments that all Police Commissioners’ offices look the same covering reusing the set:
“Wow.”

On the use of the Batboat:
Me- “Isn’t that the dock from the movie?”
Anabelle- “No silly, theyre in Londinium.”

On Batman pointing out Robin is far from mod:
“That was a roast.”

On Barbara telling Alfred to tell her father what’s going on and have him alert Batman:
“How’s he going to work through that one?”

On Every time Glynis Johns shows up:
“I keep expecting her to sing, since everyone else has Dick Van Dyke quality accents
especially the policeman that only says ‘blimey!’ all the time.”

On needed to use the Recollection Cycle Bat Restorer to recover from the memory erasing fog:
Rosa- *huffs*
Anabelle- “Uh huh. I figured they’d use the Bat-antidote pill, but I guess that’s not extra enough.”

On Batman calling Lady Penelope, “You Ogress, you vixen!”
“You whaaat?”

On the bad guys talking about a winch:
“Like
*Sees robin tied to the winch*
“AAAAAAH!”

On Batman telling Alfred to fetch the Anti-Mechanical Bat-Ray from the Batmobile glove compartment:
“I don’t even know what to say.”

On Robin swinging into action:
“Get ‘em Ernesto!”

On having watched too much
“Get Lord Pfogg’s pipe. That’s where the Akuma is hiding.”

On Batman saying, “Robin, you drive the Batmobile:”
“Aaah! They grow up so fast.”

On Alfred sitting on the back of the Batmobile:
“Why don’t you let him sit him in the middle like, oh I don’t know, everyone else on the show.”

On our heroes threatened with African death bees:
“Is it supposed to be a robot bee?”

On Alfred keeping everyone’s secrets straight on the trip abroad:
“I don’t know why everyone’s so fascinated by Batman and Batgirl. Alfred’s the one with the real double life.”

On Robin’s girl troubles:
“Prudence won’t help Robin because all the other girls have the hots for him?”

On a rare appearance of a former regular this season:
“I like her hat. Aunt Harriet has such good fashion sense.”

On the use of the anti-lethal-fog Bat spray:
“Oh, for the love of God.”

On Robin being fondled by adoring British female fans:
“I told you this was gonna happen. He looks so uncomfortable.”

On Batman using the Hindi rope levitation trick:
*pauses playback*
“What? Oh my God, I have so many questions.”

On Batman saying, “That’s enough talking,” to Batgirl:
“Says the man who just gave her a giant background speech on a magical spell to lift a rope.”

On the big fight scene:
Me- “Did Robin just hit that’s guy in the back with an axe?”
Anabelle- “No, Ernesto did.”

On Batman pulling out, “My pipe of fog bat-reverser.”
*Pauses playback again*
“I can no longer continue*
*Continues, and sees people moving around in the lethal fog*
“Can I perish here? It’s closer.”

On Robin saying, “Pip pip, cheerio and toddle-oo:”
“Stooop. Robin I can’t deal with you anymore.” 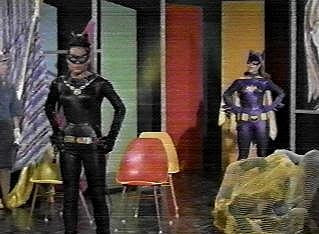 On Eartha Kitt’s premier:
Rosa- “Who’s that?”
Me- “Catwoman. Julie Newmar was making a movie. Also, she’s Yzma.”
Anabelle- “You don't need to bring that up.”

On the return of the Batgirl theme:
“How come Robin doesn’t get a get ready song? He’s more fun.”

On the beeping alert Bat-Pen:
“If it’s too loud, why did you make it in the first place?”

On Catwoman’s whole plan being centered around stopping other women from wining “best dressed” awards:
“Who wrote this? Uh huh. A guy.”

On Kitt’s vocal mannerisms:
“Ooh. She purrs...interestingly I’d say well but I don’t think a purr sounds like that.”

On Commissioner Gordon saying he can tell Barbara something because she’s not Batgirl:
“’Cause that would be caaa-razy. Bwa ha ha!”

On Batman telling Batgirl the dynamic duo can fight their own battles:
“Oh really? Said the man under a net”.

On Batgirl getting captured after not noticing the villain:
“She’s right there, even Robin wouldn’t have done that.”

On Batman and Robin covering their eyes to enter the women’s dressing room:
Rosa- “Really?”
Anabelle- “Yell to them that you’re not naked.”
Rosa- “Yell at the guy who wrote this script.”

On Robin realizing things will be more obvious in time and they’ll beat them in a few hours:
“Robin! That’s not the point.”

On the return of the Cat-phone:
“Oh cool, its still there. I though Julie Newmar might have taken it.”

On the appearance of the Golden Fleece:
“That’s not a fleece. It’s a shiny dress.”

On the big fight scene:
“Get ‘em Ernesto.
It’s no fun that Batgirl’s a dancer doing her own stunts. I can’t name her.”

On Catwoman being referred to as having bad habits:
“Like being a criminal?

On the reveal at the end when the commissioner gets a call from his secretary:
“What’s next week. Woo! Bonnie!
Ooh, its bad news.”
*Egghead and Olga are announced*
*Screams delightedly*

And just in case anyone accuses me of making this stuff up: 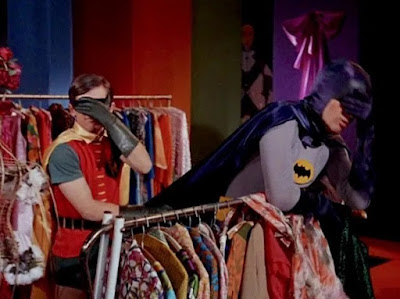