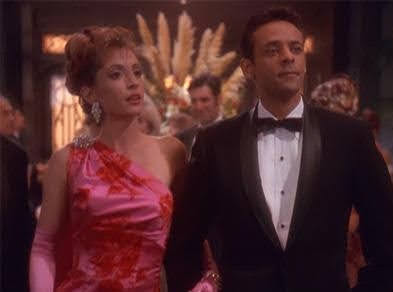 This episode premiered a couple of weeks after Goldeneye hit theaters and was instrumental in saving Bashir’s character on Deep Space Nine from unpopularity.  It was either the launching point, or a key moment in multiple character arcs that would define him as a key character throughout the series.

Anabelle watched some of the DS9 episodes with me the first time through. When I reached this one on the second round, since she’d seen all the 1960’s Bond films it parodies, I thought she’d enjoy the combination.
She did!

In another “Lou and Donald tango" like moment, you can’t really enjoy this episode without having a grasp of the characters in the first place.  Unlike the holodeck episodes of The Next Generation, which I found annoying and dull, this one ties into a dramatic life threatening story outside of the Holodeck. In other words, it was an effect, not a cause.
The predicate show did that in reverse, and got bogged down in the main characters play acting (almost all of which happens off screen with occasional hilarious allusions in other episodes on DS9) or yet another debate about what constitutes a sentient life form, the solution of which will be forgotten the next time it comes up.

Sorry, I fall into TNG bashing far too easily.

Any-hoo there are a few things that make “Our Man Bashir” brilliant, above and beyond my inherent love of amalgamations.

As can be seen in the title, though the stakes in the story were serious, it was made in full knowledge that it was in the vein of Flint and Matt Helm films.
One brilliance is that most of the main characters appearing in the parody are there because of an emergency transport from an exploding Runabout. Their physical forms are on the holodeck, while their much larger neural patterns are stored in all of the stations other computers.

This provides two important bits.
The first is that the station is bogged down with all that information, removing the chance for a quick, less dramatically interesting solution.

The second, is that many actors became free of their usual character conventions and were able to throw themselves into wildly over the top interpretations of exaggerated Bond movie type characters. 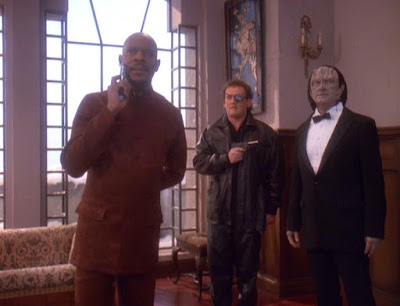 Anabelle greatly enjoyed the poking fun at conventions, and the insane, scenery chewing of the regulars who were clearly having far too much fun.

I think the DS9 gang did it too well, honestly, turning themselves in to liars.  The final line, stating secret agent Julian Bashir "will return." While a match to Bond end credits, it turned out to be false. MGM decided they did far too good a job making fun of their lucrative franchise, and warned Paramount not to do it again.

Another bit of brilliance was having Julian’s frequent lunch companion Garak visit the good doctor while he was adventuring through his Sixties spy thriller. As a former intelligence agent of the feared Obsidian Order, Garak was capable of pointing out the ridiculous tropes before the viewer could. However, since the writers and actors clearly love the genre, Bashir, as an internal fan, was there to point out why the ridiculousness didn't matter if it was entertaining. 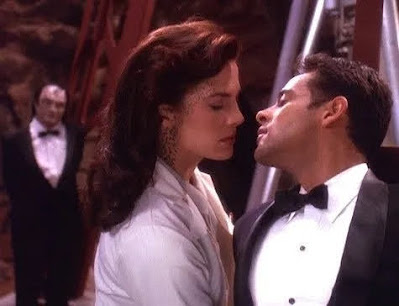 As happens frequently when his attitudes and former life is placed in relief by an absurd setting, Garak varied between being darkly amusing and flat out terrifying.

After every line he spoke, Anabelle would look at the screen and say, “He makes me feel unsafe.”

To which I’d reply, “There’s hope for you yet.”

Except, of course, when Garak said his traditional line that I’d appropriated, and she claimed that I made her feel unsafe. 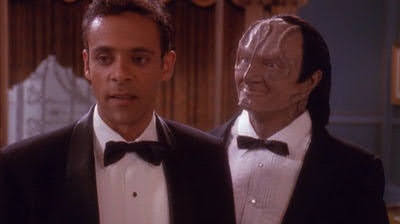 I always enjoyed this episode as well, being a fan of both Bond and DS9. It was definitely nice to see Bashir with confidence and taking the reins for an episode!

Thanx for reading and commenting. The Trek website just had an article saying how it saved the character who was really unpopular at that point. I guess it's akin to Fozzie's "Good Grief the comedian's a bear!" bit.