“The Sport Of Penguins” /”A Horse Of Another Color” 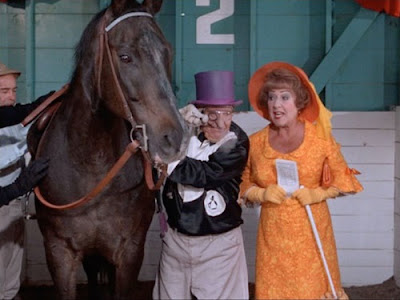 On Gordon throwing in an emphatic “I’ll wager!” about suspicions of Penguin’s goals:

On learning the Penguin has a Book Shop:

On the villain’s identification:

“Is his name just Penguin?”

On the butler’s hurried call to tell Batgirl what’s going on:

“Alfred is living the life.”

On the glue factory having a horse for emergencies,

Even though they don’t use horses anymore:

On the fight styles:

“Ernesto get some. Woo!

Hey, leave the kicking to Batgirl.”

*Batman says they usually don’t need help with their fights.*

On the victim having his face taped over:

On Barbara back at her desk:

“Is she the only person who works at the library?”

On the use of “The Saturday Review of Folios:”

On the amazing disguise name of “A. L. Fredd:”

On Barbara being given a Penguin:

On Bruce wondering how to find Batgirl:

“Is Ernesto going to ride a horse?”

*Batgirl shows up to be the jockey…and is obviously doubled*

“That is totally a guy. Oh look, if it isn’t Winston, the horse riding stuntman.”

On the mention of Egyptology:

On Tut referred to as a real arch criminal:

“The Penguin was just there!”

On the introduction of the next villain at the end of each show:

“The Unkindest Tut Of All” 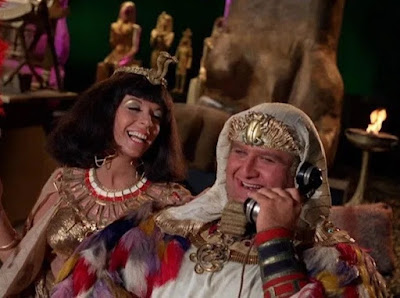 On Bruce and Barbara seeing Tut on TV after a date:

On Tut’s bellowing of, “All sides of da lawww:”

On Tut’s placing a tracker on the Batmobile to learn the location of the Batcave:

“Why didn’t you sneak in the trunk like everyone else?”

On Shirley, Tut’s moll who doesn’t roll play the Egyptian stuff at all:

On Batman searching for the tracer on the Batmobile:

“If they have the budget to make a magnifying glass look like a bat, they should buy a bug detector.”

On the use of a dummy to show Batman and Bruce together:

“They took a page out of Daddy Long Legs’s book.”

On the return of a piece of Egyptology in Barbara’s apartment:

*It vanishes in the next scene*

On Batgirl figuring out Tut’s plan and staying hidden to follow him:

“Batgirl, stop being smart. Gotham not a town for smart people.”

On Bruce and Barbara returning to another date:

Anabelle- “What is this? I do not approve.”

Me- “Remind me never to show you The Killing Joke movie.”

On Gordon doing the classic “He didn’t say” phone bit: 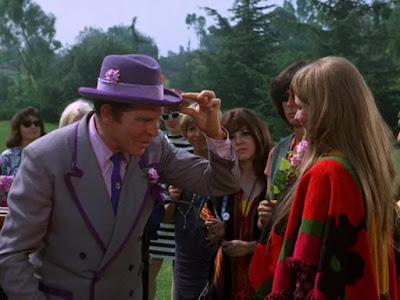 On Louie’s flower mobile showing up:

Anabelle- “Is this a hippie episode? Oh yay!”

over the kidnapping of a hippie:

“You call Batman for a fly on the wall, and now you’re not listening to your daughter?”

Anabelle- “What does that mean, I don’t understand.”

Robin- "The flower children think we’re cool, man, like we turn them on, y’know?”

On the line, “This lilac colored card could be…a plant:”

On the Man-eating Lilacs:

“They won’t eat Louie because they’re not cannibals.”

*all that’s left are supposedly shoelaces*

“How does it untie them?”

On Barbara’s quick change in the bedroom when the kidnappers are there:

“There is no way she changed that fast. They are not the same person.”

“Did she do that? She’s gonna kill Louie the Lilac!”

On Louie’s plan in general?

“What is his motive? This makes no sense.

I love how it only took twenty minutes to stop him.”

On killing time by playing the whole Batgirl theme:

“Are they singing this whole thing now?

*song plays the line “Are you a chick who fell in from outer space?”*

Do they think she’s an alien?"

On Egghead showing up at the end:

These really are one after the other.

Do Bruce and Dick go missing for days?

Dick goes to school. It must be summer.”