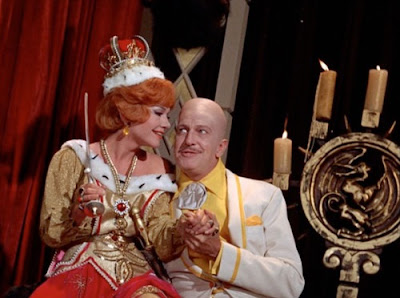 On the Return of Vincent Price:
“Yes! Egg puns!”

On Olga Being played by Anne Baxter:
“It’s Zelda.”

On Batgirl catching herself saying, “My fath…Commisioner Gordon:”
“Chief O’Hara is a dum dum.”

On Batman illustrating the contagiousness of comedy:
“Yeah! He made an egg pun.”

On finally noticing Egghead’s white suit and yellow shirt:
“He’s dressed like an egg. I love it!”

ON Alan Hale Jr. showing up as a restaurant owner
“HIS NAME IS GILLIGAN!!!!”

On Egghead showing up with his plan for the end of part one:
“CHICKENS! Is he going to egg them?”
*The eggs are tossed and explode into clouds of tear gas*
“What.
That is not what happens when you feed a chicken onions.”
*the heroes are bawling*
Oh. My God. This is so dumb. Look, Robin’s laughing.”
*The Commissioner arrives*
“Aren’t you supposed to recognize your child’s crying?”
*The episode ends*
“Wait the cliffhanger is just them crying???
PULL YOURSELF TOGETHER BATMAN!”

On Batman calling the radium an “Iso-type:”
“It’s isotope. I hate him right now.”

On Chief O’Hara’s comment on the radium:
O’Hara- “I feel them radioactive gammas and betas crawling up on me right now.”
Anabelle- “I’m done. I just can’t.”
*Leaves room*

On the paleontologist:
Anabelle “His name is professor dactyl?”
Me – “Terry perhaps?”
Anabelle- "You're not helping."

On the clearly guy in a rubber suit, human sized dinosaur:
“A neosaurus? What is that?” 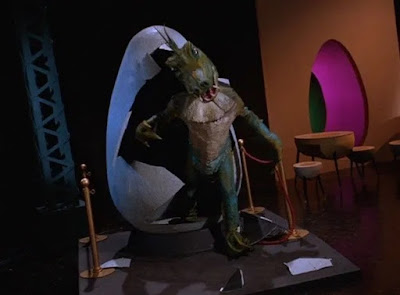 Yes, its an extra picture, because this thing needs to be seen to be believed, and I didn't want to leave out Vincent Price, because he's awesome.
So there.

On the reuse of entering the Batmobile footage:
“He buckled himself already.”

On the Neosuarus:
“He looks like Cecil’s cousin.
“I’m like 100 percent sure that’s Batman.
But how did he get in that egg?”

On the Batgirl mystery continuing:
“Robin is so pissed they don’t know who she is.” 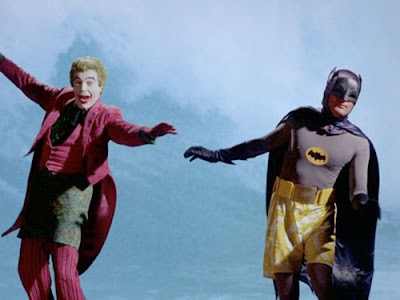 On the Joker’s gang’s fine surveillance equipment:
Rosa-  “The hot dog is a microphone?”
Anabelle- “No, it’s a walkie talkie. A microphone would be silly.”

On Robin’s beachwear:
“Dick, what are you wearing? That’s not a sweater.”

On Robin in the Batcopter:
“Hey, that’s not Ernesto. Stock footage again.”

On the surf music:
Anabelle- “What is it people with people in this time uncomfortably into tambourines?”
*music continues*
Anabelle and Rosa- *Start dancing*

On surf lingo:
“This is like the hippie episodes. I have no idea what they’re saying.”

On the continued use of fine surveillance equipment:
“Is anyone going to comment she’s talking to a hot dog?”
*Batman does*
“Thank you.”

On the Joker planning to plunder and pillage?
“Is he a pirate.”

On Joker making the Dynamic Duo into surfboards:
“Those are going to be thick surfboards.”
*the material pours on them*
“Is that marshmallow?”

On them escaping the boards:
Rosa- “They can survive and come back from that?”
*The boards explode due to the Bat-ray, freeing them*
Anabelle- “Absolutely not. Those boards are too tiny.

On costume changes:
“Robins eyeholes are unnaturally big in this episode.”

On Sixties beach wear:
Anabelle- “Look at Dicks pants”
*Batman says it time to “Put on our baggies”*
Rosa- “That sounds ...”
Anabelle- “Great. Thanks Mom.”
*Their baggies are on*
Anabelle- “What in God’s name is Batman wearing on his legs.
It’s worse than Dick’s.
Jokers are nice, though.”

On Barbara’s minor role:
“Batgirl’s not in this one much. Good for her.”

On the infamous surfing scene:
Rosa- “He’s in the water with a cape.”
Anabelle- “Blue screen. Wooooow.”
Rosa- “Their clothes aren’t even wet.”
*A shark appears, Batman sprays it*
Anabelle- “Oh my God, the Bat-shark repellent!
It’s back! Yes!!!!”

On the large amount of surf lingo describing the contest:
“What?”  (Constantly)
On Joker’s victory celebration:
“I like him!”

On Batman and Robin hoping to head home and get some sleep:
“ I told you these are back to back to back.”