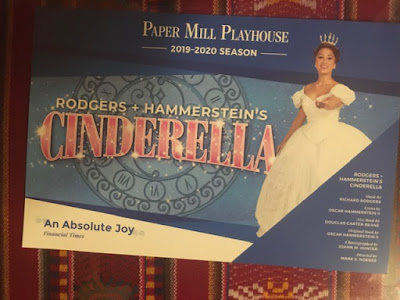 I’ve always written about plays as soon as I see them.  The connection to the live performers is a truly inspiring thing to me.  Looks like the planet going down the toilet can be pretty distracting, so here’s some brief and wicked late memories.


I think these came back to me because we (like much of the rest of the planet) watched the recording of Hamilton.  Honestly I originally figured I might read during it.  I didn't understand why a show abut one of the founding fathers but with modern music would be so popular.  Knowing Lin-Manuel Miranda's other work, I should have known better.

It's not really about the founding fathers. It's a giant emotional roller coaster of the best kind that's about what we can do with the limited time we have.

Anyway, on to the live shows:

We saw Rogers and Hammerstein’s Cinderella back at the end of December at the Paper Mill Playhouse.  As with everything there, the production values and cast were Broadway level.

It was Mom’s Christmas Present from my sister, and we tagged along because Anabelle has fond memories of watching the Leslie Ann Warren version on tape at Grandma’s house over and over again as a child.

I was totally unaware of the unusual history of that piece.

It originated as a television performance with Julie Andrews in 1957.  The more famous (due to improved technical quality) version with Warren was also a TV performance in 1965.   There was a Disney Channel TV version with Brandy in 1997.  There were also various stage versions but it didn’t make Broadway until 2013.

Each time the show got extended (since the TV versions were no where near normal play length), it was done by adding in extra numbers from other, unrelated (sometimes wildly so) Rogers and Hammerstein musicals, as well as expanding the narrative and adding characters.

The most famous version, from 1965, was also the version played the straightest.  The other ones all had some elements of tongue in cheek, poking fun at the original story.

The newest version runs with that, and in a bizarre circle of references thing, pulls in some elements from the Disney live action Cinderella film from 2015.  A clear one is the Sleeping Beauty like meeting of Ella and the Prince before they know who each other is, allowing a connection based on kindness and other traits stronger than “Nice to meet you, you’re hot.”

Speaking of bizarre reference circles: there’s also the element of one of the Stepsisters falling for someone “below her station” and being an ally to Cinderella, taken from Disney’s animated Cinderella 2. The radical and goofy democracy fan she falls for was a highlight of the show. The original story needs a little extra silliness now and then. There was also the way the Fairy Godmother was handled, again based on kindness, that suggested some cross pollination with the 2017 live action Beauty and the Beast.

Another well handled change from the standard story was showing occasional moments of Cinderella and her step family actually getting along and bonding.  It doesn’t make up entirely for all the horrible things they do, but it does make Cindy’s overwhelming forgiveness a little easier to understand.

The show was amazingly well done, there’s really nothing like being in a room with someone who can belt out a song and fill the theater with their voice.  Aurora and Anabelle were excited that the Prime Minister was Christopher Sieber who played Lord Farquard in Shrek on Broadway and was/ will be in Company with Patty Lupone and our cousin once the world gets itself out of the current toilet like state. 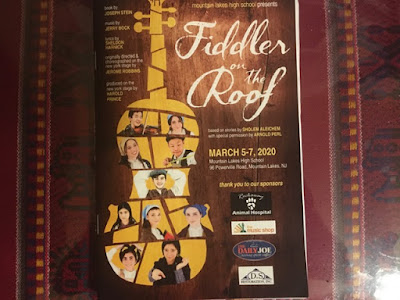 The other play we saw, was Anabelle and I attending the Mountain Lakes High School Fiddler on the Roof.  For a mostly whitebread town in the middle of the woods of New Jersey, those kids did an amazing job.  I had heard a couple of songs before, but had no clue about the story. Therefore, after the fun and music of the first act, I was in for a major depressing surprise as the family and entire village went through troubles, struggles and were eventually evicted.

My daughter’s school was one of the lucky ones that got to finish their Spring Musical.  Everything shut down the following week and everyone knew it was coming.  The play served as prophetic about leaving known things behind.  It was also a lot of the kids’, both on stage and in the audience, last chance to be together for the year before facing a boatload of uncertainty, something else echoed by the story.

No one knew the extent of the coming shut down, but it wasn’t too hard to figure out it would be a while. I was already packing hand sanitizer in a quick draw holster at that point, but when Anabelle went off to congratulate and hug the cast, I didn’t flip out (externally)  it was appropriate for the situation, and as it turns out, an appropriate farewell in person.

The ending was much more of a gut punch for me on another level though. Seeing the villagers of Anatevka forcibly expelled from their life long wooden shack homes felt exactly like when Up the Lake closed.

As they’re being forced out after the packing was done, Golde’s answer to why she was sweeping the floor before leaving for the last time, was exactly the same words and tone of utter loss I used when we were up there, knew it had ended, and I was still raking as we always did on Memorial Day.

That one took a surprise depressing turn at the end there.

Much like Fiddler on the Roof, now that I think about it.

Here’s hoping, much like that play, it is the happy, musical earlier parts that stay in everyone’s memories and create the legacies and bonds going forward.

Email ThisBlogThis!Share to TwitterShare to FacebookShare to Pinterest
Labels: The Stage