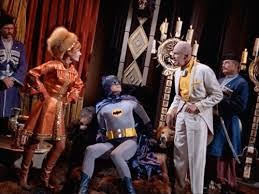 
On noticing this should have been a three-parter with the other episodes with them:
“The opening is the exact same scene as last time.”

On Vincent Price’s initial dialogue:
“Ha ha! The egg puns are back!”

On Egghead producing the Egg of Ogg acid:
“So it’s designed specifically for that egg?
That’s overspecialization.”

On the Commissioner saying he can’t bring himself to call Batman:
“You call him every day.”
*Commissioner continues about the need for courage and accountability*
“Well, that’s certainly not the Gotham police force.”

On Dick commenting on his homework that Genghis Kahn was quite a guy:
“I mean…
Yes…
But...”

On Batman talking to the Commissioner on the phone and keeping it to himself:
“Robin’s like, ‘Do what now? Okay, I guess I’ll find out when we get there.
Again.’”

On learning of the villains’ next target:
“There’s a vault in the bank full of caviar???
Because??”

On Barbara saying, “I’ll go straight home:”
“And then change. But first talk to the bird.”
*Barbara does just that*
“Called it.”

On Batman suspecting this may not be egg related:
“Are you kidding?!?!?
He’s obviously doing something with eggs!
He’s Egghead!
Everything is egg related.
His head…is an egg.”

On the old “proverb,” “Do not make hay before eggs are safe:”
“I think that’s going to be my senior quote.”

On the Batmobile racing along:
“Batman! Pick a side of the road.”

On Egghead debating if he should “rat” on his friends:
“RAT?
LIKE RATIGAN!
Sorry, I got excited.”

On another of Batman’s "leave the crime fighting to the men" speeches:
“All right Batman. We get it.
You’re better than her.
You don’t need to say it every episode.”

On the concern that Batgirl will be drowning and freezing in the “caviar:”
“It’s sand.”

On one more of Batman’s "leave crime fighting to the men" talks,
while it’s the police outside that are catching the criminals for a change:
“All right that’s enough.” 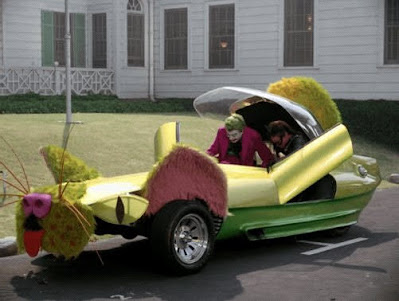 “The Funny Feline Felonies / The Joke's On Catwoman”

On Joker being let out on parole due to Bruce Wayne’s sponsorship:
Anabelle- “Why is he let out? Why would Bruce want that? Batman’s an idiot.”
Rosa- “You just realized that?”
Anabelle- “I’m simply restating it.”

On the Catmobile:
“That is the ugliest thing ever seen.”

On the villains’ hide out:
“It’s actually called “Sleazy Hotel” and its right across the street from police headquarters.”

On our heroes thinking Joker is going strait:
“Have you learned anything from dealing with Penguin?”

On the use of the odd wheeled dolly like things to scuttle around on the floor after Catwoman shoots through the window:
Anabelle- “They’re not going to acknowledge the fact there’s a Bat-belly scooter?
Rosa- “Made for this special occasion.”
Anabelle- “Why? To be less efficient than crawling?”

On Batgirl’s timely arrival:
“How did she get there in three minutes?”

On more anti-female crime fighter speeches:
“No wonder Bruce doesn’t have a girlfriend.”

On the change in villain quarters décor:
“Those clowns ruined the cat lair.”

On looking things up on the library’s back-up system:
Anabelle- “They have a Batcomputer?”
Me- “A microfilm reader is a real thing.”
Anabelle- “Yes, but they have a labeled one in the Batcave.”

On third season budgets:
“Batman just fell off the pole. Why didn’t they reshoot that?”

On Catwoman sharing the information that karate isn’t effective unless you’re yelling:
“Okay then.”

On the aging of stunt men:
“Welcome back Ernesto! His hair is getting a little wild.”

On the caped crusader believing Joker saying he was duped by Catwoman and agreeing to a handshake:
“I think someone should arrest Batman for being an idiot.”

On the “no cliffhanger” rule this season, even for a two parter:
“What?”

On Robin trying to grab a snack as they pass them and Batman telling him to never mix crime fighting with eating:
“Robin looks so so sad…
Oh good he got one.  Yay!”

On Batman using a book to translate:
Anabelle- “How is he translating without flipping pages?”
Me- “There’s an entry for that whole thing in there.”
Anabelle- “Of course it is.”

On the background scenery of Phoney Island:
“Wow look at those buildings in the background.
They are totally not cardboard.
They’re not even nice cut outs.”

On the lighthouse keeper and his wife having an argument before any heroes or villains show up:
“Let’s just interrupt this week’s Batman for lighthouse marriage problems.”

On how Batman prevented the explosion from causing damage:
“Of course, anti-blast Bat-powder.
Why didn’t I think of that?
Oh yeah. Because it’s dumb.”

On the final trial:
“The jury looks criminalish.”
*They are. A Bat-fight breaks out, Batgirl belts one with a prop*
“She just hit someone with the Bible!!”
*Joker’s stunt double gets some major screen time*
“Is that Ronald McDonald?”