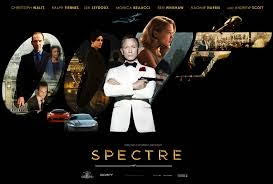 This return to form for 007 had my daughter mostly mesmerized from the opening gun barrel shot, which she greeted with, “Finally! It’s about dang time!”

The insane oner that in the pre-credits sequence helped to establish that focus.  The destructive ending of it before the theme led her to proclaim:
“Oh my gosh he broke the building!
*more explosions*
“Sigh…he broke Mexico.
They can’t take him anywhere.”

The discovery of the telltale ring was not as clear as the producers probably hoped however.
“It's a ring…with a brush on it?  Oh, it’s an octopus. I thought it was a ghost. Cuz…Y’know…Spectre.”

Confusion continued through the credits with a lot of
“why are you….”
And
“what does that…”
during the tentacle stuff.

Her response to James being “grounded” showed she knows the franchise:
“That’s a lie.  In like… a day… they’ll be all, ‘007 we have something for you.’”

There was a whole lot of cheers when Q (Now known as “Sass-ay Q”) and Moneypenny’s arrival. This was followed by another thrilled greeting for a regular:
“Tanner!!!!

Side note from me: As we went through these films I kept thinking I recognized Tanner from somewhere.  I finally realized I didn’t, but Rory Kinnear resembles his dad Roy, who appeared in two of my favorite films with Gene Wilder. (He’s Veruca Salt’s father in Willy Wonka, and Moriarity’s giant hand wielding assistant in Sherlock Holmes' Smarter Brother.)

As to be expected the Q scene was full of cheering. There was a brief emotional switch when the Aston Martin DB10 was introduced:
“It's a vroom!!!!”
And then stated to be earmarked for 009:
“WHAT!?!?!?!”

But then she applauded wildly when Bond asked if the watch did anything and Q’s reply was:
“It tells the time. Might help with your punctuality issues.”

Followed by predicting- on Q’s return, “I don’t think the DB10 is there now because James…yup.”

Further proof arrived that we’d taken too long to continue watching these.  When the subtitle identified Christoph Waltz’s character as Blowfeld.  I groaned and she said:
“That’s not gonna give anything away, because I don't remember who that is.”

She did however, immediately identify Dave Bautista in silhouette, because she recognized, “Drax’s head.” She called his eye gouging technique, “Ewwwwwww, that was really cool! But nasty!”

During the whole car chase she kept a running chain of emotional outbursts.
*Gunshots*“Aah! No not the car!  Oh, I forgot it’s bulletproof!”
*Bond pushes a button* “Cool! Oh, it doesn’t work, well he did steal it.”
*Bond pushes a button with flames* “Fire? WHOAH!  Yes!”
*The car crashes* “NO nonononono! Oh my gosh!  Back at MI6, twelve people are going to strap him down and smack him.”

The altercations between M and C showed how much she had allied herself to the new leader since the last film. Besides calling C a “buttface” most of the time, M’s explanation of how a license to kill is also a license not to kill earned:
“Preach, M!”

The tendency of some of the older films to pad a bit led to a conversation between us when Bond reached the snow covered location:
Anabelle- “Please no skiing.  I have PTSD.”
Me- “It could be worse. What about scuba?”
Anabelle –“Don’t even bring it up.”

She joined in Bond’s evaluation by Doctor Swan:
Doctor- “Do you consider your employment to be psychologically stressful?”
Bond- “Sometimes.”
Anabelle – “Ooooooh, yeaaaaah!”
Doctor- “How much alcohol do you consume?”
Anabelle- A lot!”
Bond- “Too much.”
Anabelle- Yee ha!”

But then she did cheer when James finally ordered a vodka martini “shaken, not stirred.” Then cheered even louder when Q showed up to order 007 a prolytic digestive enzyme shake.

When Bond told the bartender to, “Throw that down the toilet, cut out the middleman,’ she empathized:
“Oh, that poor man.”

Bond’s follow up meeting and travels with Doctor Swan basically had another character in the conversations.

James asks- “This organization, do you know what it’s called.”
Anabelle- “I’m gonna take a guess here and say, Spectre?”

James is apologizing to Swann for bringing her there as he digs into the wall:
“Well, then I'm sorry.”
Anabelle- “Is he gonna blow up the hotel?”

Later when she informs James: “Don't think for one moment this is where I fall into your arms, seeking solace for my dead daddy.”
Anabelle- “I like her.”

James *drinking and sees a rat on the floor* - “Who sent you? *Points gun* Who are you working for?” *it goes into the wall* “Now, where did you go?”
Anabelle- “It’s a rat.  Why are you interrogating a rodent?
Do you have a little too much of that alcohol?
The answer to that is always yes. “


For everything coming together at the end she got even further into it, having more heated reactions to M and C facing down.

Anabelle- “I really don't like him! Am I supposed to?”
C-“In light of the new information I've given him, he's decided to close down the double-0 program with immediate effect.”
Anabelle- “No. I’m not.  Does he die? I hope so.
Come on M, Avada Kadavra him.”

Back with Bond and Swann, she noted on the train how the film was going back to the classic series:
“Oh wow, what a shock. She’s wearing a pretty dress and he’s drinking.”

When the fight started with Mr. Hinx I mentioned it was a call back to From Russia With Love, and she asked, “Was that the train one?”  Shortly thereafter she was completely involved in the fight:
“YES! Throw the green beans!”

Of course at the end of the fight when the question was asked, “What do we do now?” Anabelle’s suggestion was “High five?”
*cut to Jamesbonding*
“No. That is not a high five.”

*Franz’s Meteorite alone in space making an impact speech*
Anabelle- “He’s gonna do a ‘like me’ isn’t he?”

Franz taking responsibility for all the evils of the Craig era films- “It was all me, James. It’s always been me.”
Anabelle- “Well, he’s not creepy at all.”
“He is a nasty man. I know I said it. But needs reinforcing.”

The cat shows up when he identifies as Blowfeld:
Anabelle-“Kitty!  Oh the kitty man!! I know who he is now!”

Bond’s torture led to a lot of yelling no about the “pointy things” and
“That is scary looking.  Sharp pointy!!! Pointy are bad!”

Though she calmed down enough to have her usual level of snark for Blowfeld revealing he killed his own father for favoring James:
“That's…extreme. They could have sat down had tea.”

When we learn that the watch Q provided does have an extra feature and explodes:
“Woo hoo!” I want one!!!!”
“Yeah Q, we don't do that anymore my butt.”
“I like these movies.”
“Did kitty man die?  *building explodes* “I’ll take that as a yes.”

The cheering went on through the climax, especially when Tanner, M and Q teamed up.
“Ooh! It's the squad!  Well, most of the squad!  Where’s Moneypenny?”
*she shows up later*
“THE SQUAD!!!”

She rated C”s “M for moron” comment as “Not a very good sass” and cheered mightily at his plummet.

She had some control, reacting to learning the building will explode in three minutes with a deadpan- “Of course it will.”

However, she spent most of the end of the film alternating between going, “AAAAAAAAAAAAH!” and cheering.

Bond walking off to retire garnered some unsolicited advice:
“How well did this go last time James?  Turn around and go back to M.”

But him driving off in the Aston Martin DB10 (a concept car specially made for the movie, how cool is that?) ended on more uncontrolled cheering.

I guess we can say Daniel Craig did a good job, since my daughter went from refusing to watch his movies for two years, to viewing all of them in under a week and then complaining she has to wait over a year to see the next one like the rest of us.


Oops, I guess these later ones did expand in to full “kid’s eyes” reviews.  It's a Heisenberg thing.  Now that she’s older, once my daughter realized her reactions were being observed, she went into performance mode.

But here's a weird detour first