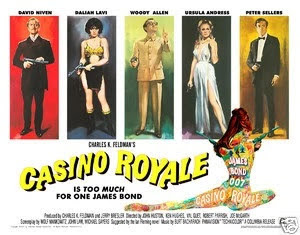 OK, I knew this film was a mess. It had five or six directors (depending on what counts), stars who were rewriting scenes on the fly, refusing to work with each other and walking off the picture before their stuff was finished.  All I really remembered was the Blazing Saddles like mixed up chaos from the end (which inspired Mel, since this came first.)

It’s got elements of the David Niven Bond coming out of retirement and dealing with his past, the straight Casino Royale Baccarat plot with Peter Sellers, a broad spoof of Sixties Bond films in general, German expressionism, Psychedelia and a bunch of other stuff…but they don’t mix together well, and huge chunks of all of them are missing to make them unfollowable.  It's kind of a shame as what exists was gorgeously shot with lavish sets, a hugely talented cast, and amazing cinematography.

I gave my daughter the out to stop watching it part way through, but she pressed on.

One of her quotes, explaining why we made it all the way through, is the best summary of this film I’ve ever heard:
“I want to turn it off every other scene.
But I like it and am laughing at every OTHER other scene.”

It got pretty close a couple of times though. I think James Bond's (Peter Sellers's) improvisations as he tried on multiple outfits for James Bond (Ursula Andress) just barely saved it at one point.

Those names weren't typos. This is a weird film.

On the opening song:
Anabelle- “These are not really James Bondy credits. I’ll fill in.”
*does solo kick line dance*
Rosa – “You’re wearing too many clothes. With this music they should have Goldie Hawn in a bikini.”

On the appearance of sheep on the way to Sir James Bond’s estate:
“It’s James Baaaaaa-nd.”

On David Niven’s speech patterns and the movie’s inability to follow through or explain itself:
“Why does he stutter?”
Later
“Why doesn’t he stutter anymore?”

On the handing down of the name to preserve the illusion:
“They just named some random other person James Bond?  That explains a lot.”

On the one "daughter" of McTavish cutting through a slew of Gaelic to explain the offering to the Gray Piper is a quart of whiskey:
“I like her.”

On the women at the McTarry estate plotting:
“Why are they speaking French? What authorities?”

On James Bond (Coop) saying to the the Chinese agent, “Sayonara:”
“But…that isn’t...”

On Mata Bond being called a bad dancer by her father:
“She seems to be doing fine…
Weird compared to the music and everyone else, but fine.”

On the exchange:
Mata- “Charlie, do you speak English?”
Charlie- “No.”
Anabelle- *exaggerated resigned shrug*

On the secret entrance in the spy school being operated by pulling a toilet chain:
“How do you actually flush the toilet?”

On the auction using multiple currencies and bidding motions:
“Jesus! What is happening?”

On Mata speaking Batman like sound effects in a fight:
Me- “Did she say, ‘Pow! Whock! Zap?’”
Anabelle- “I wasn’t going to say anything.”

On Bernard Cribbins (Donna's Grandfather from Doctor Who) showing up and doing anything, such as driving a taxi from London to Berlin:
*massive cheering*

On “What’s New Pussycat” playing out of an open manhole for no reason:
“What was that?!?!”

On the Baccarat gambling scene:
“Oh it’s that one. The other one was way better.”

On Orson Wells doing magic tricks at the card table:
“Why is he doing that? That’s kinda weird.”

On the introduction of Miss Goodthighs:
Anabelle- “Miss what?”
Me – “Miss Good…”
Anabelle- *interrupting* “That’s what I thought.”

On Peter Sellers going missing when they were supposed to film the scene explaining why he’s captured:
Rosa- “What just happened?”

On me introducing the Sellers bagpipe hallucinations as, “This is the weird part:”
Rosa and Anabelle – “REALLY!?!?!”

On the film switching back to a broad parody at the end:
“Why is there a UFO?”

On the reveal that Doctor Noah is Woody Allen’s Jimmy Bond:
Rosa and Anabelle *Authentic gasp of surprise* “WHAT!?”

On Jimmy Bond’s speech about making women beautiful and killing all men over four foot six, with a backup choir appearing under his platform:
“What is happen...did they just sing “Battle Hymn of the Republic??”

On the constant transitions often unconnected to what went before throughout the film:
“I’m confused.”
“I just don’t know.”
“Huh?”
“This movie doesn't make any sense.”


“I missed something…or did everyone?”

On the chaos going out of control in the final fight:
“Is that Frankenstein?” (Played by David Prowse no less)
*American aid is shown to be cowboys on horseback and airborne Indians*
“What is that?”
“Are their parachutes really teepees?”

On the entire cast blowing up at the end:
Rosa- “So…that’s it?”