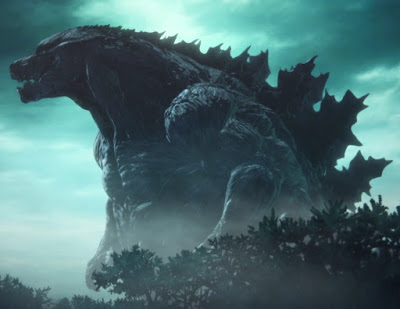 Godzilla: Planet of the Monsters
2017

In honor of the 900th post of this blog. GODZILLA WON!
Sadly, the viewers lost.

Anyway- on to the story.

After getting incredibly hacked off that humanity killed his Kaiju buddies Rodan and Anguiras (by building their own Smog Monster or something I believe, the flashbacks are murky) Godzilla chases everyone off planet.  A couple groups of aliens had come to help stop the Big G, but failed miserably.  They seem like they want to be the Xillians (from Monster Zero/ Final Wars) and the Black Hole Aliens (from the Showa Mechagodzilla), but they come off more like Space Elves (aloof and spiritual) and Space Dwarves (group minded and technological.)

The two alien groups helped evacuate the Earth twenty years ago and now travel with the humans in the Escape Earth Ark, which is where we are when we meet our Hero Captain Haruo.

He’s busy barricading himself in a control room, protesting a bunch of old people deciding to go colonize some other planet.  They say they know they’ll never go back to Earth, and they want to die with their feet on the ground.

Then they blow up trying to land...nice try old people.

Hero Captain Haruo is thrown in jail, but everyone feels bad and decides it’s time to go back to Earth.

Godzilla is still there, possessing some kind of organic shield generator, making his atomic breath kind of congeal around him first and then fire like a blaster.  Oh yeah, and he’s plant based…or something.

Space Elf Leader bails out Hero Captain Haruo  and gets him onto the Earth Landing team because…Space Elves.  On Earth, there are Godzillaish Wyverns that knock the snot out of many of the anime mech battle thingies the humans have brought.  The plants are also Godzillaish, as is most of the planet.

Turns out no one noticed the ship traveled at near light speeds and though to them its been two decades they've been gone for TWENTY THOUSAND years.  Makes NASA’s unit conversion errors seem pretty tiny, don’t it?

Godzilla shows up and stands around a lot. The human commander sacrifices himself to prove that the Big-G’s weak spot for his shield generator is his dorsal plates.  Then Space Elf Leader puts Hero Captain Haruo in command, to the complaints of EVERYONE IN THE MOVIE!

Hero Captain Haruo gets the Dregs of the landing force back together, leads Godzilla into a collapsed valley, and implements the former leader’s strategy of both killing himself (or at least burying himself under rubble), and taking out the King Kaiju.

Space Elf Leader pontificates a bit about how odd it is that Godzilla hasn’t changed or grown at all in two hundred centuries.  His claimed theory is that there were a whole bunch of little Godzillas and this was the last one.  The snark in his delivery suggests he knows  theory is full of it.

Confirmation of that is fairly quick as the real Godzilla, more than a tad peeved about the death of his offspring shows up.

Now our favorite Kaiju has the mass, speed, personality and mobility of a mountain.

Hero Captain Haruo watches the beast wander slooooowly off from under the rubble and the credits roll.

Click for Litany of Godzilla Index
Posted by Jeff McGinley at 2:00 PM