A Seriously Stupid and Smart Movie

Somehow, in some way, I went through about a hundred films that impacted my life, and missed one that fits in almost all of the categories I was talking about.

It’s from the Eighties with fantastic elements, I quote it regularly, I remember when I first saw it with my sister in the theater, I watched it frequently on multiple rentings and cable viewing, it has an appearance of an odd non-human thing (a Tasmanian Devil, sorta), and it has random musical numbers worked into the narrative.

It also gives me an uncontrollable urge to eat apples. 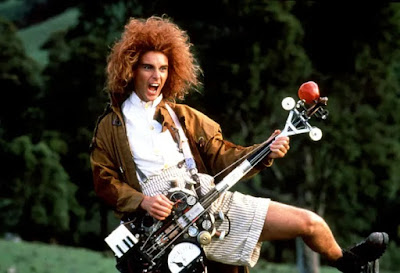 Yet the debut picture of Yahoo Serious- Young Einstein never popped into my head.

Besides being a family favorite, it was popular at RPI due to a focus on smart people and beer.

As this thing is unlikely to ever receive a Shout Factory commissioned, extra filled Blu-Ray, I tracked down a used DVD and soundtrack CD recently.

Outside of the awesomely catchy and random soundtrack (which properly does include quotes on the album) the main reason this film has stuck with me, is the combination of intelligence and stupidity.

On the one hand, it is a constant stream of complete absurdity.  And on the other it's a very sweet story about a romance and family bonds. 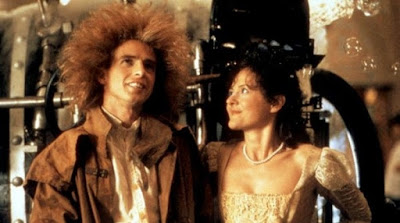 It has nearly unstopping, flat out ridiculous physical comedy in it, and the references to the scientific figures it features are almost completely inaccurate on a magnificent scale.

However, mixed in with the complete wrongness, are subtle references and jokes that require detailed knowledge of the scientists and their work to get.

In other words, the only people who can appreciate the jokes are the ones that are going to notice that everything else is wrong to a bizarre degree.

Those are also the ones likely to be offended by the wrongness.

Therefore the target audience for this movie is me, and possibly a few members of my immediate family.

And for that level of personally directed, focused marketing,I'm keenly interested!

"Pleased to meet you, Keenly!" 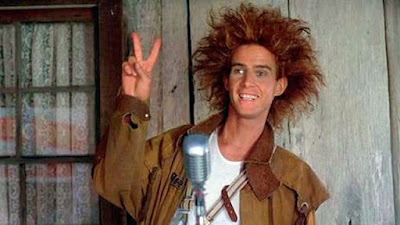