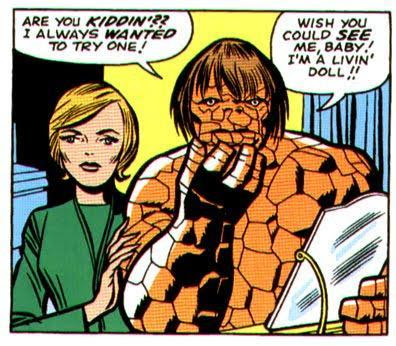 My daughter asked me who the Beatles were when they appeared at the top of a countdown as the greatest musical artists of all time. I told her that they should be ranked number one, and went on about all their artistic influences on Rock and Roll and music in general, listed other bands they inspired, and cited many areas where they were pioneers of their art form.
But here's the thing. I don't own a single Beatles album, and I probably never will. If I'm flipping radio stations, I usually won't stop if I hear one of their songs either.  This is all well and good because, as a geek, I'm not supposed to have good taste in music.  (This also explains why my daughter didn’t know the Beatles at age seven when she knew the entire Enterprise crew, and, in fact knew over a half dozen Green Lanterns by the time she knew the alphabet.)
The problem is: that's almost the exact same way I think of Jack Kirby. Clearly there is something wrong with me.
I do get asked about him, which happens far more often than most people would expect in the real world.  This is because I’m now known at work as “the comics guy”.  There are people who won’t go see superhero movies until I’ve reviewed them. It can be quite a burden. (The burden being convincing my wife that I MUST go to the midnight movie preview based on this lame excuse.)  When asked about Kirby, I always give a explanation similar to how I explained the Beatles to my daughter, expounding on the fact that we wouldn’t have most of what comics visually are today without Big Jack’s influence.
I fully understand and appreciate why he is known as the King.  Just based on the characters he created, on his own or with others, he is deserving of that title.  His contributions go far beyond that.  Comic book images, panels and pages wouldn’t be in the form they are now without his influences. He did things no one had done before, and many that no one has done as well since (and all at a heck of a page rate).  Yet, with mountains of Golden and Silver Age reprints in my collection, I have nearly no Kirby stuff.( It’s almost impossible to have no Kirby stuff A] Because he’s done almost everything, and B] Because I’m an uncontrolled addict:  I‘m also not a Spider-man collector…which means I only have one short comic box full of Mr. Parker’s adventures.)
Here’s another Beatles parallel:  There are many Beatle Songs that I do really enjoy and own…but only the versions covered by other artists (Aerosmith, the Bob’s, the Electric Mayhem…etc.)  Same with Kirby creations; I’ll buy almost any Marvel comic where Doctor Doom shows up, except of course, his original appearances.  It’s the same thing with Darkseid in DC. I’m all over it when he decides to mess with Superman or the Justice League, but will likely never buy Kirby’s original New Gods series (awesome omnibus edition or otherwise).
This is in no way an “I don’t know art, but I know what I like” issue on my part.  It’s more like, “I do know art, but I don’t feel like looking at it, and I’m not sure why.”
I have two theories.  The first relates to why some modern comic book fans don’t understand the importance of Watchmen. It’s because they’ve read a myriad of things that were influenced by it first, so by the time they read the original, it looks like everything else.  This may be how I see Kirby, but sadly, I think there’s a much dumber reason.
Early on in my comics addiction I bought the Super Powers limited series by DC, based on the then new toy line, which also became the final incarnation of the Superfriends series. Darkseid was the main villain, and it was drawn by Jack Kirby himself.  In my youth, instead of thinking, “Wow, Darkseid drawn by the legend who created him, AND the King’s interpretation of the JLA!” I foolishly thought, “Hey, this art doesn’t look anything like the Superfriends on TV!”  So perhaps that’s the problem.  Intellectually I recognize Kirby as truly worthy of the title King in the comics’ world. (Heck, I still get misty thinking about the tribute to him when they killed off Turpin in Superman: the Animated Series.) But maybe subconsciously, his art always makes the kid running much of my brain remember, “The guy who didn’t draw the Superfriends right.”
While possibly destroying my aesthetics, Saturday morning cartoons have redeemed me somewhat by making me a fan of one of his less popular, though still fantastic works. (One last similar Beatles related confession on this topic:  The one Beatles song I always liked in its original form is far from the top of their greatest triumph list: “Octopus’s Garden”.)  Thundarr the Barbarian is my all time favorite Saturday morning cartoon. Jack Kirby designed all the characters after the main three, and was hired because of his work on a little post apocalyptic comic he did for DC in the70’s.  Even though I may never buy an Essential Fantastic Four volume, I’m waiting and hoping for Showcase Presents: Kamandi, the Last Boy on Earth. Once I can read the whole series, I’ll be able to write the story of how Kamandi grows up to be Thundarr…but that’s an insane post for another day.
Posted by Jeff McGinley at 2:00 PM

I never knew Jack Kirby worked on Thundarr, which was one of the most awesome saturday monring cartoons ever.

Sure, Kirby, Steve Gerber, Mark Evanier, Alex Toth. No wonder it was the greatest cartoon ever.