Top Ten Suprise Changes for the Hulk in the Avengers Movie

It’s been publicly advertised that Mark Ruffalo will be replacing Edward Norton as the Hulk in the upcoming Avengers film.  However, there are other surprise changes in store for the character that have not been released to the movie going audience: 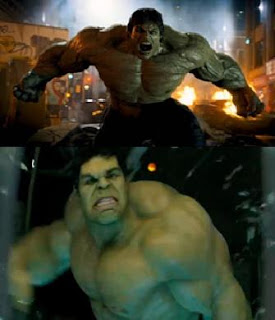 10.  In a last minute decision to appease gray and red hulk fans, the Hulk a mix of colors in the final release, leading to
"The madder hulk gets, the plaidder hulk gets".

6.  The Hulk is not voiced by Ruffalo, but by Chef Emeril Lagasse, "HULK BAM!"

4.  Due to a Spinal Tap like error, in many scenes the Hulk appears to be ten inches tall instead of ten feet tall.

2.  Believing “no publicity is bad publicity”… in an attempt to generate a similar Internet buzz caused by Ang Lee’s “Hulk Dogs", the Avengers will feature "Hulk Chickens"

1.  The Hulk's rampage is stopped when he is KO'ed by Rocky Balboa.

It avoids specific spoilers, focuses on generalities, and doesn’t really reveal anything that couldn’t be seen in the trailers.

Click here for further thoughts full of spoilers, as it is my uncontrolled geeking out about specific events in the movie that I can’t keep from excitedly babbling about.


DO NOT CLICK THE SECOND LINK IF YOU HAVENT SEEN AVENGERS AND WANT TO BE SURPRISED BY STUFF! GRAB YOUR KIDS AND GO SEE IT FIRST!