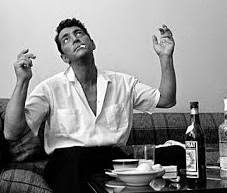 To mark the end of yet another season Up the Lake, here’s a song parody of Dean Martin’s signature tune back in 2004.  Linda Degl said I should do a song about always losing if you win the first hand after seeing one on a similar topic.

Didn’t realize my particular brand of insanity works by request.

Here’s an awesome piano version for those who want to sing along.

EVERYBODY WINS SOME MONEY

Everybody wins some money someplace


If you have it in your power

Everybody wins some money sometime


But win on the opening deal


Your cash goes away when losing
Big time on the wheel


If you have it in your power


As all your pennies fill up someone else's can


Everybody wins some money sometime


Something about first hand winning
Turns your luck to shit.

Up the Lake Index
Posted by Jeff McGinley at 2:00 PM

Email ThisBlogThis!Share to TwitterShare to FacebookShare to Pinterest
Labels: songs, Up the Lake