Return to Dance, or Was I Supposed to Remember This? 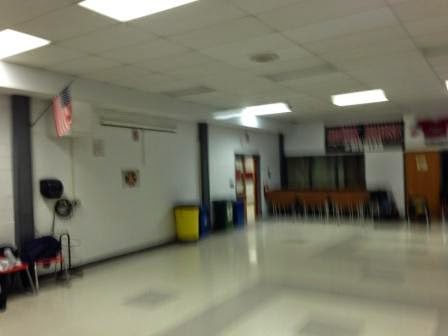 The room always looks a little blurry when I spin.
Prologue:
We skipped a semester because Rosa had knee surgery.  Well before the summer started we forgot just about everything, which meant the wedding at the end of the summer left both of us constantly asking, “Which dance is this?”  Closely followed by, “and how does that go?”

There were brief flashes of Latin music, where Rosa would explode into the proper moves, and I’d get out of the way.  This never lasted very long, because the DJ was big on mixing songs before they were half over.

That technique caused me nearly infinite problems as I usually required half the song just to find the beat.

Luckily, we made it out alive and were able to return to Tony’s instruction.

Lessons started earlier than previous years, likely due to the number of snow cancellations we’d gone through.  The first week came the day before Anabelle had off for a September religious holiday that we don’t celebrate. (I can’t keep track of the names of mine; I’m certainly not remembering everyone else’s.)

She stayed at Grandma’s, giving us a “date night” to attend both the intermediate and advanced classes, followed by dinner out.

We started out with Rumba, and amazingly, I remembered far more than I thought.  Chalk it up to juggling enhanced muscle memory and a bucket like head.

OK we forgot “the box” which is where beginners start, but clicked back in to the standard steps and were complimented by Mary - the one advanced student, and occasional Phake Phoebe - who was there.

Tony would redistribute the class on a “come when you’d like to” basis to even things out a bit.

Despite sore knees, our return to Merengue was also successful.  We even figured out the arm exchange turn thing.

This likely has a cooler sounding name in Spanish.

With encouragement from Mary and Tony, we stayed for the Advanced Class.

It was Samba, again.

What the hell!
We’ve never been there for basics, but whenever we stay for advanced class it’s always Samba, starting from “What you learned before.”

I could kinda do the basic steps, for the thirty seconds we stayed on them.  Switching over to the “Samba Walk” was hopeless.  I never remembered which foot crossed in front of the other and for the end part where Rosa and I were supposed to arm exchange past each other I nearly killed both of us.

Luckily the local comic shop is awesome and has “Twelve Hour New Comic Day” allowing me to reward myself with some new issues before taking my bride to dinner as a payback for nearly trampling her to death.

No Phoebe this semester. He had other assistants, Bella was the Phake Phoebe this time, but none who served the genuine article’s vital role as Tony’s Keel, keeping him focused and reminding him of what had come before.

The class started with him asking, “Do you want to continue with what we did last week, or do Rumba.”

For those of you with zero retention and recall skills, those were the same thing.

So we did the Rumba, starting back at the same basic beginning we started at the week before with the Rumba Walk and an Alemana turn into a New York.

Wow, I actually sound like I know what I’m talking about.
If you watched me doing them, it would be pretty obvious I don’t.

Tony had us switch partners almost the whole time.

I ended up with a Latin woman who was new. Therefore she didn’t know the patterns Tony always uses, and also was unfamiliar with his stutter starts where he goes,

“Now we start on the left and quick quick…but first…”

I was used to all this, but she still looked like she knew what she was doing more than I did, because she was Latin.  She did let me lead however, unlike another Latin woman I had danced with whose name I will not mention.

For Rosa it was business as usual.  She was paired up with a tall gringo named Jeff and had to lead. (That would be a hint about the other Latin woman mentioned above.)

Still no sign of Phoebe, Bella filled in again.  We were realizing we’d be getting rotating Phake Phoebes for the duration this time around.

Tony started by saying we were going to “Refresh the Rumba” before doing something new.

We knew full well that without his time management consultant, we’d be doing Rumba all evening.

Anabelle came with us that night, and due to the sleepy nature of the slowest of Latin dances fell asleep sitting at a table.  Several, “Change Partner” commands while she was out led to a confused statement of, “That’s not Daddy!” when she arose.

We went over the same routine we’d done in multiple other classes, refining posture and hand placement.

Well, we were supposed to refine them; the switching partners threw me off considerably.

I was concerned about accidentally breaking the older woman, tossing the tiny woman into the air, and combining my unsteadiness with the unsure woman to fall out a window.

However, they did all let me lead, and my daughter said I did, “Mostly good.”

Considering her first rating of any attempt of me to dance was to give it a “1,” that’s some stellar improvement.

Week 4
The same Phake Phoebe’s were there again, Mary and Bella.

We did some Merengue at the close of the beginner class again.

When Intermediate started, it was *&%#ing Rumba again!

I believe some frustration was starting to set in at this point.

It manifested again when Tony said to change partners and us and another couple who use the class to have a night out dancing with our spouses yelled, “NO!” and refused to move.

We did the same steps yet again with an even greater intense focus on posture and hand position.
Therefore, I completely lost track of my feet and hips, which up until that point hadn’t been too terrible.

We hung around for a little of Salsa in the advanced class to let me play Raiders of the Lost Beat before heading home to soak in ibuprofen once more.

We entered to hear a Hustle playing.  In what can only be described as an unadulterated miracle, not only did we remember it from the previous year, but I was also capable of doing it properly despite being a first generation descendent from the man banned from the Hustle in Pennsylvania.
Tony asked what we wanted to try, and before he could suggest Rumba again several people shouted, “Jive!”

We started with the basic, but also did some of the triple step.

That seems to be the difference between Jive and Swing. Don’t ask me which is which though, I’m too busy counting.


In both styles we could do turns, and out and back. This was my people’s music.

Well, sorta.  Because once he hit play on the CD, I got confused between single and triple steps reducing me to a sort of “Step and a half” shuffle while I hunted for the beat.

Part of the problem was we were taking steps that were too large.

In other words, we were still doing the Hustle.
WHO KNEW?

After only one song, and just when we got our step size down to manageable, Tony switched back to Hustle and it was time for us to go anyway.

The beginners were Tangoing, and we joined it with what we amazingly remembered.

Along with the new Phake Phoebe, Sharon, he started us at the beginning again for our class.

At one point the woman I was paired with said, “It’s OK, you can dance with your wife.”

My guess is that was due to equal parts of her wanting to dance with her own husband,
And her hearing me say, “I’m not #*%&ing coming anymore,” when he first said switch.

Luckily several more couples came in, and the switching stopped.

It was the same Tango steps we had learned before, but more controlled.

Apparently dancers are more specific than I am about head placement…
And, y’know, foot placement.