The second season of Star Trek was the apex of its creativity.  At first the stellar storytelling and character moments didn’t appear to be enough and the show was due for cancellation. A massive outpouring of effort from the fan base and production team, forced to do everything the hard way in the pre internet days, proved to the network that this was a valued series worthy of saving.

The Trekkies were rewarded for their hard work and ingenuity with … 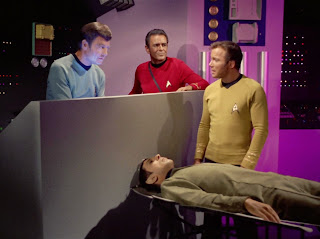 Wow.  That had to sting.

“What is brain?” may have come from the script, such as is was, but I’m sure “Why is brain?” was the question in viewers’ minds.

The Andromedan’s have left this society behind as evidenced by their teleportation and wrist mounted matter and mind control tech. 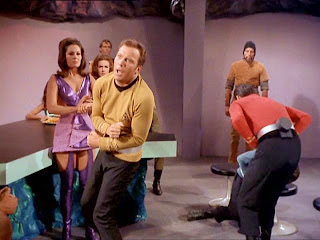 The torture belts and the ability to keep a brain alive further connect the Providers from Triskelion into the mix.  The possession like use of the Teacher is similar to Sargon and company’s body borrowing.  The evidence of a central plot thread throughout the series mounts…either that, or budget cuts and disinterested studio execs forced an increase reuse of plots and props.

Sometimes, even an overactive imagination can’t pretty up the truth.

There are a few high points –
Very, very few…
OK, one and a smidge-
In this first of many third season stories where the writer used a pseudonym to escape association.

When the command crew beams down with their remote controlled Vulcan, we get a glimpse of Captain Sulu working with Science Officer Chekov.  When they take these positions, both become more serious and are clearly “in command.”

And they can walk in front of the viewscreen now, which they do continually.

Oddities noted about the technology:

Outside of all of the insane ones linked to the main plot line, of course.

Sulu must have been happy to learn there are now thermal suits for planetary exploration after his nearly freezing to death. The Landing Party still has to heat rocks with a phaser in order to stay warm, though.  I guess they’ll have to wait for the movie time period for someone to rediscover Parka Tech.

The universal translator can turn nearly any language, no matter how different the aliens are from humans in structure of psychological makeup, into words and phrases completely understandable by the Enterprise crew.

However, it leaves the words Morg and Eyemorg untouched.

The cranial kidnappers have no understanding of the biological differences between male and female without the Teacher.

Assuming the women don’t die of exposure, or aren’t killed by the men as retribution generations of slavery, torture and childhood abandonment on the cruel surface, I’m sure they’ll figure it out.

Adding up the number of cultures Kirk has taught this lesson to probably balances the scales with the number of species he’s completely wiped out.

Why they didn’t start Season Three with this D.C. Fontana classic, I have no idea.  It’s definitely my favorite among the non-comedy episodes.  A tale that is a pleasantly mixed blend of espionage, space battles, and personal moments is hard to beat.

Kirk’s way out of sorts at the start, acting much like his mirror self. The obvious indication of how bad it’s gotten comes from starting out with a medical log.  The first whole reason the plan works is that his crew follows his orders without question even when it’s clear he’s completely off his nut.  There’s a fantastic musical sting when he specifies a course heading that takes the ship into Romulan territory.

They probably should have saved the dramatic swell for the crew’s immediate replies and the sighting of Romulan war craft.

Hey, the special edition gang threw in a Bird of Prey!  They’re fans who can’t help themselves, aren’t they?

The second reason the whole plan worked at all is the Romulans didn’t know there wasn’t a Vulcan Death Grip.

Or more accurately: the Romulans did know there was a Vulcan Death Grip.
As presented in “Journey to Babel” it is called tal-shaya, an ancient, merciful form of Vulcan execution that snaps the neck instantly.  It was the evidence that made Sarek a prime suspect. Apparently, Kirk wasn’t the only member of the Enterprise crew with a loss of mental faculties due to stress this week.

Before the follow up to the “gripping” scene, it’s clear Spock is in on the plan from the outset for two key reasons. 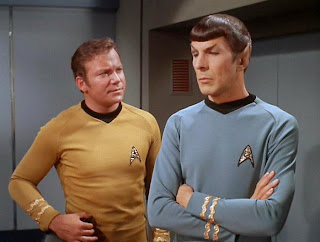 1) This line:
“If we had not crossed the Neutral Zone, on your order, you would not now need our opinions to support a decision which should never have had to be made.”

That's completely cold and harsh, and gives Kirk absolutely no benefit of the doubt. It’s clearly for show to the rest of the command crew to establish Kirk isn’t in his right mind and is solely to blame.

2)  This other line that happens shortly before:
“I believe the Romulans have developed a cloaking device which renders our tracking sensors useless.”
He BELIEVES they have one?

And it was on a ship flown by a Commander with more than a passing resemblance to his Dad.  You’d think that would have ingrained itself into his computer like, pointy eared noggin.  Obviously forcing himself to lie has addled his Vulcan mind.

The Romulans are having some memory issues as well. Given their shared history with Vulcans, it’s odd they are surprised to find the most famous son of that planet on the most famous ship in the Federation.

It’s not just their memory; their safety protocols are equally atrocious as those of Starfleet. Kirk is able to beam aboard without tripping an alarm of any kind.  At least the Romulans detected the foreign communication from inside the ship.  However, It’s not like they did anything useful about it.

Spock nearly did miss it, though, between downing some Romulan Ale 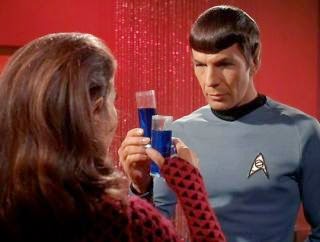 and his finger fondling time. 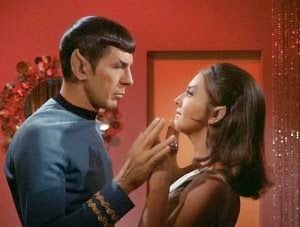 He may have started distracting her as part of the plan, but by the time the call came in he was totally digging the Commander to the point of his own distraction.  Kirk is extremely fortunate that his highly competent slightly more than opposite number (she is a Fleet Captain after all) has a similar weakness for the opposite sex.  Sub-Commander Tal is no slouch either, further demonstrating the concentration of awesomeness on ships theory.

Even with the Commander suitably (getting) busy, Our Captain’s campaign almost goes as badly as the international incident in North Korean waters it was based on. Awesomness in Star Trek far outmatches its levels in real life. 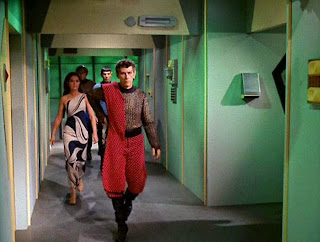 As the Commander charges after him, notice that her crew reacts with just as little surprise to her wearing an evening grown as Jim’s gang does to him showing up shirtless.

See? They are alike.

Once Kirk escapes, it still seems like Spock is doomed.

Technically, he should have been.  Since beaming through shields is impossible, one might think there was at least a single fleet in the galaxy that immediately powered them up when an intruder was so much as SUSPECTED to be on board with an enemy ship in visible range.  Not that any of them do, but one might think it anyway.

Spock is full of zingers this time, maybe he’s trying to show off for his new lady.
“You're being clever, Commander. That is unworthy of a Romulan”
Dang. 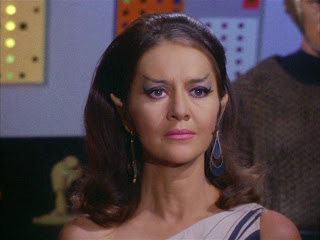 It works though, and her saddened shock and outrage at his fronting for a theft shows how badly she’s hurt:
“What are you that you could do this?” Is answered by an academic coldness completely opposite to his previous treatment of her, and above and beyond Mr. Spock's usual dispassionate tone:
“First officer of the Enterprise.”

No wonder Uhura dumped him.

This adventure is another wonderful episode of “The Spock Show” where Nimoy gets practice for his Mission Impossible gig by expertly playing an alien James Bond.

The climax, however, is pure Captain James T. Kirk bravado.

First he beams back onto the Enterprise and demands the technically impossible.
“Scotty, I just stole this new technology from an enemy whose ships we’ve never seen the inside of before, plug it into our innards and make it work.”

Kudos to the Chief Engineer for instantly thinking of hooking it up to the shields, as opposed to the sensors, or the hull, or the warp field generators, or one of eighty gazillion other subsystems that is might tie to.

Who knows, plumbing probably runs through the whole ship, maybe it was supposed to plug into the toilet?

It’s kind of like hearing, “Quick, install this Apple GPS into your Samsung phone while you’re driving so we can get away from the guy I stole the software from that’s shooting at us.”

When the Captain orders, “Warp Factor Nine!” every Trekkie on Earth goes, “WHOAH!”

The excitement overpowers us to the point we forget to be impressed that the Romulans have absolutely no trouble at all keeping up at that unsafe speed. 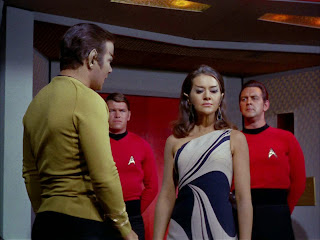 Kirk and the Romulan Commander bow to each other following his victory, because no matter how worthy each found the other, it would have looked silly if they slapped hands and said, “Good game.”  It’s a darn Shame Joanne Linville never came back, since she was one of the greatest and most fascinating opponents ever faced by our heroes.

Shame for other reasons as she was something fascinating that Spock hadn’t faced too often either.

The final words spoken by the First Officer to The Romulan Commander generated one of the most satisfying before it was destroyed by cannon theories my deranged multiple universe maintaining mind has ever come up with. 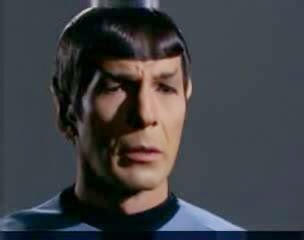 “You underestimate yourself, Commander...”
“I hope that you and I exchanged something more permanent...”

As did her reply:
“It will be our secret.”

Communication to Starfleet was stated to take three weeks.

That’s a LOOONG flight for our angled eyebrowed couple to share “their secret” before reaching the Starbase.

Years later,  a Half Vulcan/Half Romulan named Saavik shows up serving aboard the Enterprise.
She’s on the command path, yet the fleet’s most famous Science Officer is her mentor.

I know the timing doesn’t work out
I know the Half Romulan part was never confirmed on screen.
And I know the Next Generation, (which I happily ignore by choice) said they got married.

I also know it looked an awful lot like she…um…helped teen-aged Spock through Pon Farr on the Genesis planet.

But I still think my idea is cooler.  Maybe she just mind melded with him on Genesis to calm him down.  He was aging at an incredible rate, his blood probably boiled for only a minute or two. 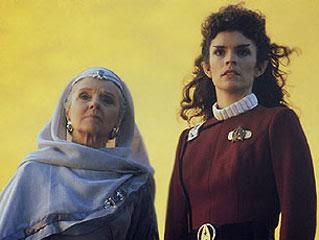 The deleted concept that she stayed on Vulcan in Star Trek IV because she was pregnant due to that …um…helping…could have instead been due to the visible on screen chemistry she built up with David Marcus.  He did valiantly save her (their?) life. 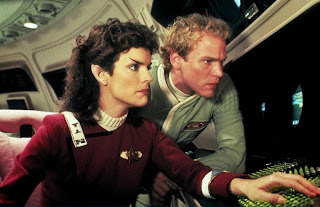 That kid would have both Captain Kirk and Mr. Spock as grandfathers!

How could any other possibility be more awesome?

Maybe it was twins?

All Hail Emperor James the First of Vulcan, and Galactic Queen Tiberia Spock!