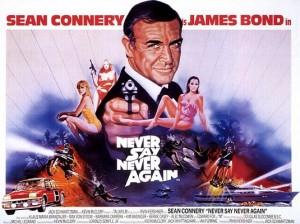 After Octopussy, My daughter wanted to know if there were more “funny ones.” like that. Say what you want about the later Moore films, but they are fun!

I explained the weird rights things that were going on with SPECTRE and she decided since it had a real Bond actor in it she wanted to watch this one instead of skipping it.

Half way through the film she asked, “Do we have to watch the whole thing?” and we ended up shutting it down.

She has unquestionably become a Bond purist.

It wasn’t for a lack of paying attention either.  She noticed a small flag symbol early on that tied the villainous plotters in with Largo, something I never noticed in multiple watchings.

There were several other surprising observations she made when I thought she’d given up completely, as well.  Meanwhile, I completely forget Rowan Atkinson no matter how many times I saw it on HBO.

As much as she objected to the “false Q” she did agree vehemently with Algernon by answering his famous line:
“Good to see you Mr Bond, things have been awfully dull around here...Now you're on this, I hope we're going to have some gratuitous sex and violence!”

With:
“I hope so too, this movie is boring.”

Aside from one or two explosions, the action scenes weren’t enough to hold on to her, and making fun of 80’s fashions could only carry her so far.

And I didn’t even tell her this was a remake of Thunderball until after she gave up on it. The scuba scenes were limited enough to hold her suspicions at bay.

Then again, their efforts to make a “modern take” on the James Bond franchise could have been handled better.

I think her eyes rolled audibly at the awesome technology of the video game battle between Bond and Largo as she said, “Ooooh…futuristic.”

Meanwhile the card games in all the Eon movies match goings on in almost any casino today.

And that’s only one reason why we continued through the next several films quickly with a great deal focus and far more cheering and shouts of, "Whoah, awesome!"

Did I ever tell you that when I saw this in the theater in Philly that they cheered at the point when Bond tells Fatima "there was this one girl in Philadelphia"?

I thought , in my young adult's brain ,that this was a customization done for every large market. Not till years later seeing it on tape did I realize that was the line for every place.

Very cool, thanx for sharing. Those "local moments" are always fun in the theater. I think Jesse saw Jurassic Park the Lost World right near the street they filmed the Tyrannosaur rampage in LA doubling for San Diego. And I saw 2 Weeks Notice a stone's throw from the parking lot in Jersey Bullock and Grant ended up picked up by a helicopter in.