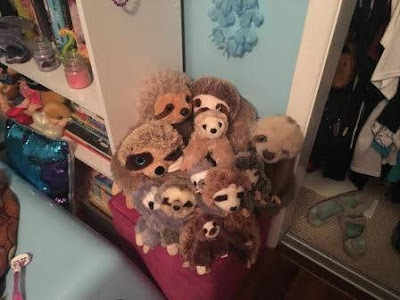 I got back up to speed at work, and organized July to make up for the fact I’d be gone almost all of August.

Rosa and Anabelle did some home stuff but also took a few trips together that I could check in on using the “Creepy App” to live vicariously through them.

They used Dinosaur Ridge as a change of view from the lake to take a walk together one day.

Anabelle decided she did want to see the Dinosaurs at the Natural History museum after all.  They did the whole place in less than half a day, which is about right.  Especially when I’m not tagging along trying to read everything.

Using our membership to the max, and needing to visit Pigeon’s red river hog family, they did spend another day at the zoo.  That was the most fun to track with the creepy app, since it’s outside; yielding a better signal and references to which exhibit they were near.  Anabelle actually called to say “cut it out’ when I texted a rhino emoji at the appropriate time.  They got to see the little anteater we missed on our two trips. Woo!  I guess we were too busy speaking Spanish to the llamas.  They also got to see feeding time for the hippo, and tried the Asian food stand by the elephants which was just as good as it looked.  (And if I hadn’t been crazy hungry on aquarium day we might have learned this together.)

Pigeon acquired two friends on this trip. A hyena named Eddie and a capybara named Aleera.  When she got home, the three of them and her made an unbelievable music video to “Help.”

Perhaps this hobby has gone a bit far.

Their journey home was…an interesting one.

Newark had an emergency landing that cracked the gear on the plane and took out a runway for a while.  It was cleared up, but between that and weather, capacity was down. Rosa received what was becoming normal for our out of Denver flights, a text stating they could switch flights at no charge.  No delays were listed, and the clean-up progressed so they stuck with their original flight...

Which was cancelled as they drove Hi Ho Silver Hooray back to the airport.

They pulled over to make some checks and call me. We all agreed these things are usually given more rapid solutions at the airport itself.

That is, more rapid solutions when you don't talk to someone who is completely divorced from reality.

The first United desk person they talked to said the only option was a redeye into Florida with a multiple hour layover that would get them home late the next day.

While looking into what would have been a nightmare of travel from one thunderstorm filled area to another, they noticed something.  The flight they were supposed to take wasn’t for the next day, but that day, and had left already.

Fortunately, after a bit, they found someone else who was far more sane. There were a couple of flights before they left coming to Newark with extended delays and some with none.  They basically cancelled the string of no delay flights, and left the delayed ones.

Therefore he found them two seats on a flight that had been delayed five hours and was still there.

So while they did get huge amounts of aggravation, and missed a chance to use the passes to the VIP lounge, they did get meal vouchers fro airport food (which threatened to make them miss their new flight trying to max it out) and reached home almost an hour before they were supposed to in the first place, allowing time to grab a quick snack with the remainder of the voucher.

We used the next day, a Sunday, to relax, de-stress, reconnect and continue Disney planning.