A Uncultured Boor’s Guide to The Nutcracker 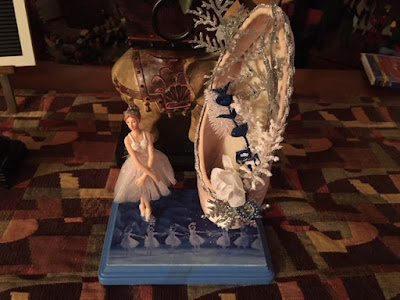 Shout out of an amazing job turning Anabelle's souvenir autographed shoe and ornament into a centerpiece, Rosa!

As the father of a dancer, I’ve seen several versions of the Nutcracker ballet. This is a massive change from my pre-married life where I could kind of recognize the Tchaikovsky music from commercials and other films on a good day.

In fact, in the past two years I’ve seen the Fathom Events presentation from Moscow, and a live version by the New Jersey ballet at MPAC in Morristown.  I’ve also seen the recent Disney film version but I've been informed that one doesn't count.

As a service to non-dance connected people of the world, who find themselves in the same confused state I was in, I shall be presenting a summary of the plot.

One of the key reasons for this probable confusion is there’s no talking!

(As it turns out, just about everyone except for me and one other Dance Dad knew, but never mind that now.)

I figured ballets were like plays but with dancing.  They're more like choreographed, musical pantomimes.  I guess if Mr. Rogers threw in a couple of ballets with all those operas he did, I’d have known this.

The other key reason for the plot being hard to follow is the distinct lack of one for most of the presentation. (I believe this is the reason the Disney flick didn’t count.)

In this case, it is by design and a large part of the reason dancers like this one, as there’s no annoying story line to get in the way of the performances.


The tale as far as my viewings and research can establish-

The story begins in a mansion full of a metric boatload of children on Christmas Eve.  The eldest girl is Clara, a sweet, and mature lass who is an amazing dancer and deserves the magic the story will bestow on her.  The eldest boy is Fritz, who is a jerk, and deserves a sound thrashing.

The kids and adults frolic and dance about in the joys of the holiday for a bit.  Then a spooky looking guy dressed like Dracula shows up.  He’s their grandfather, or Clara’s godfather, or maybe just an old, creepy toymaker from the village.  Streuselmeyer (or some name like that- again, no talking) has brought several life size clockwork dolls, which isn’t creepy at all, to show the children.  He’s also brought a dashing soldier with him, that may be his nephew, some other relation, or maybe just a homeless veteran he found in the street.

It would really help if they talked.

Deiselmeyer brings other toys including normal toy soldiers and also a Nutcracker soldier specifically for Clara.  Based on everyone’s reaction as they dance around in orgasmic delight at each taste, we are seeing the invention of a way to crack open the shells here, and it is the first time anyone has tasted a nut. Fritz, being a jerk, breaks the Nutcracker immediately.  It is taped up and placed in a tiny bed to heal, which isn’t creepy at all either.

The party ends, most of the cast leaves, and the kids go to bed.  Clara's obsession over the Nutcracker is pronounced and visible to all the guests, meaning dashing soldier boy gives up any hopes of holiday romance and leaves with Foozlemeyer.

After everyone is asleep, Clara sneaks back into the main room to check on her wounded toy just before midnight, which is still not creepy at all.  Then the creepiness kicks into high gear.  First, there are mice everywhere.  Then, a hazy form of Gooselmeyeer hovers over the clock as it strikes. Clara shrinks down as the Christmas Tree towers above her and she is attacked by the army of suddenly very rat looking mice.

The toy soldiers leap to her rescue. Their leaping is excellent from a dancing perspective, but mostly useless from a “to her rescue” one.  This is especially true when the mouse king shows up, who sometimes has three heads, because... why not at this point?

Luckily for Clara, the bandage and doll bed have healed his Fritz inflicted wounds and the Nutcracker ballets into battle to save the day.  Even more luckily for Clara, his giant jaws of death Nutcracker head transforms and/ or pops off to reveal a Dashing Prince.  The Prince formerly known as Nutcracker takes Clara away on the doll bed (which isn't suggestive at all) through a mist and dances with her for a while.

And here is what I am certain is the major source of the confusion about the story line. As far as plot goes, it peters out here while we’re still part way through act one.  The rest of the time is the lead couple watching other dances.

The first of these dance watching moments is in the mist with a bunch of snowflakes.  Usually there is a  Snow Queen sometimes with her Snow King.  Act one ends after their wintery performance, instead of the more logical point a tad earlier.  This is to provide some poor back stage worker with a broom time to clean up all the fake snow covering the stage, before one of the dancers slides off of en pointe and kills herself.

All of Act two, and I need to emphasize this,

ALL OF ACT TWO,

is the Prince formerly known as Nutcracker and Clara sitting and watching other people dance in the “Land of Sweets” which they have come to through the mist and snow…or something.

The sweets are all, naturally, personified, since dancing objects wouldn't be used with this music (where I am much more familiar with it in Fantasia) until almost fifty years later.

Chocolate, Sugar Plums and Marzipan make sense. And I’m pretty sure the additionally not creepy at all enormous woman who gives birth to a horde of dancing children on stage from under her dress is supposed to be gingerbread.

Some of the other ones are only “sweets” based on personal choices:
Coffee
Tea
A muscular, prancing and jumping Russian guy in tight pants

Once everyone in the Land of Sweets is too exhausted to move anymore from all their initial dances and call backs, Clara and the Prince formerly known as Nutcracker fly off in a sleigh that, depending on that version’s design, was stolen from Santa, The White Witch, or last Fall’s production of Swan Lake.

Where they fly we have no idea since there's no indication of how old Clara is. She seems like a kid, but is played by the most experienced (usually meaning one of the oldest) ballerina.  Oscarmeyer brought her a toy, but also a hunky soldier.

Does she live happily ever after with the Prince formerly known as Nutcracker, or is this child kidnapping?

Was it all a fever dream caused by a then unknown nut allergy?

Does she go home and have to live in a dollhouse and dodge mice because she's six inches tall?

This is another key area where talking would help.

Email ThisBlogThis!Share to TwitterShare to FacebookShare to Pinterest
Labels: Christmas, The Stage