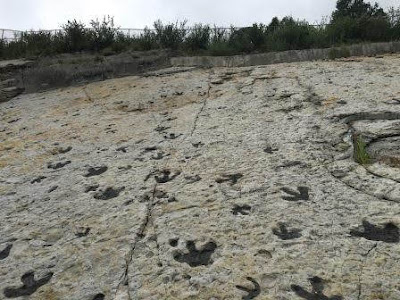 We planned a bunch of dinosaur hiking activities this day, but yet another unseasonable cold and rainy morning delayed it long enough to make Anabelle eggs.   She stated, “Wow! I'm special” when she saw the garnish. 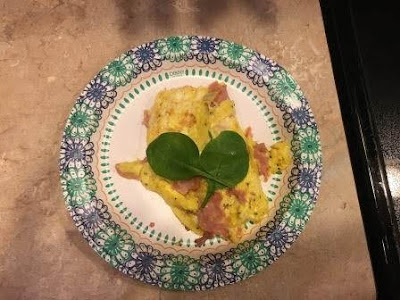 She ate while watching a movie on the Hallmark channel. When I asked about it she said, “I don’t know what’s going on but the actress is so terrible it makes me cringe and I love it!” 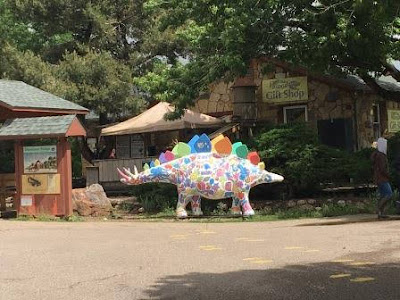 Finally, the weather cleared up and we drove “Hi Ho Silver Hooray” over to Dinosaur Ridge, and hiked up it. 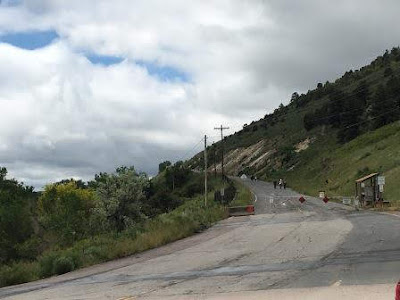 The opening area fossils were the “Slimy Beach” which Anabelle proclaimed, “That’s my nickname!”  for reasons unclear to everyone involved, but were possibly hysterical or educational. 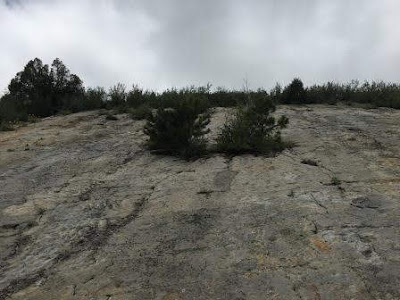 She continued her artsy photo hobby by snapping a shot of, “the dead yucca in repose.” 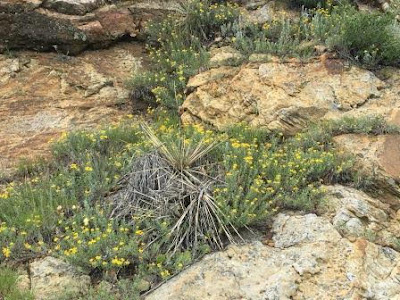 Looking at different directions off the road, we could see the prehistoric beach mentioned above, prehistoric shorelines, prehistoric mountain ranges, and a prehistoric race track that had drag racing next weekend. 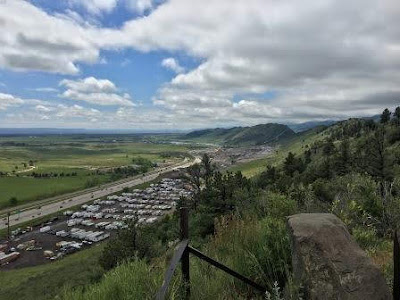 The zoning board probably should have looked a little closer into approving that one. 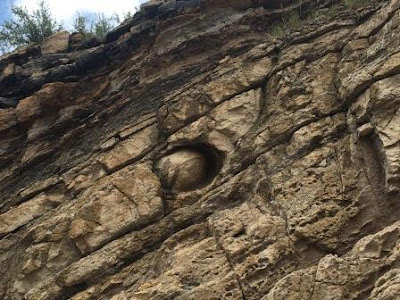 We passed by, and I listened to, a geologist giving a walking tour of the Ridge. This is a separate, more in depth lecture while walking than the little bus tour we took the first time we visited here.  I was the only one trying to pay attention and once she started making “cleavage” jokes, my family dragged me further along the path. 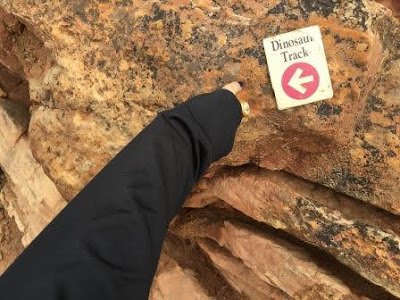 The nearby red rocks were always impressive, but the abnormal cold and humidity dropping a cloud right on top of the mountain added uniqueness to the view that day. 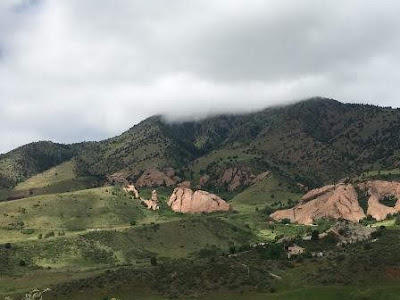 There was cage with some fossils behind it that we had seen the previous year. Crossing paths with one of the bus tours at the fossil licking section
(which they, sadly, stopped telling people to do)
revealed they were utahraptor remains!
COOL! 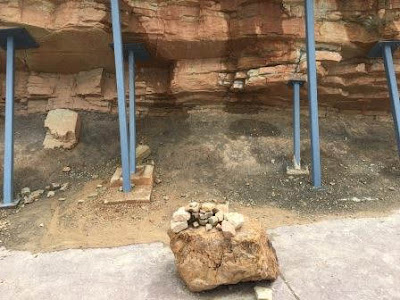 A chunk of rock with fossils in it had dropped off of the wall only two weeks before.  We caught it in a brief transition period before it was carted off to the Morrison Museum for extractions, also known as the lying in the road waiting for enough strong people with a big truck phase of paleontology. 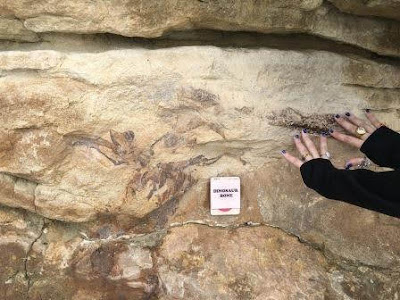 We reached the bottom of the trail and crossed the… 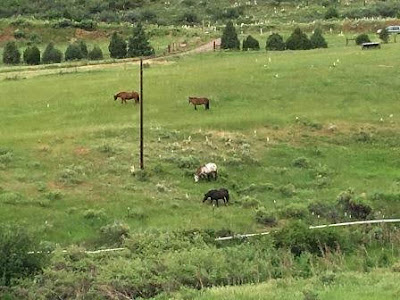 We reached the bottom of the trail and crossed the highway to see the Discovery Center. 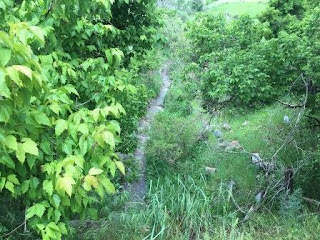 There were some cool and different fossils and models than the last visit. 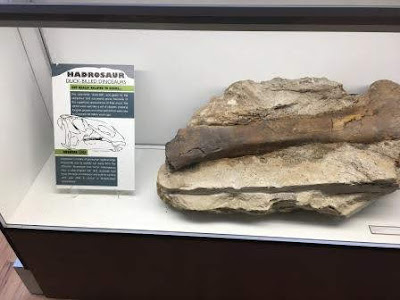 We explored a bit and, for reasons that made sense at the time, Anabelle duck walked out. 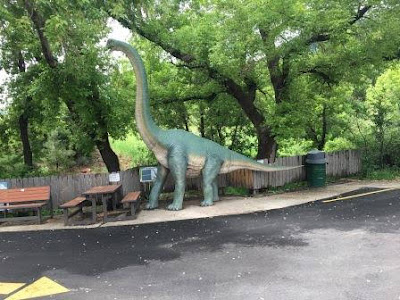 The cloud altitude had risen, but the temperature dropped, hastening us to walk the Ridge back to warm up. 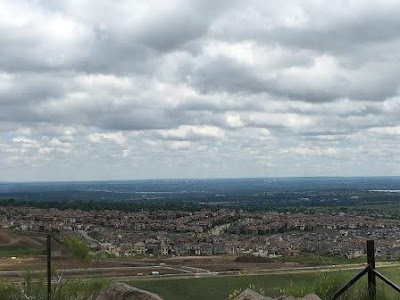 By the sign for “Plant Impressions” I started to act some out. “Look, I'm a weeping willow,”  “Look, I’m a fern.”  Since Anabelle missed the sign, she assumed I went nuts…which is close enough to the truth to be acceptable. 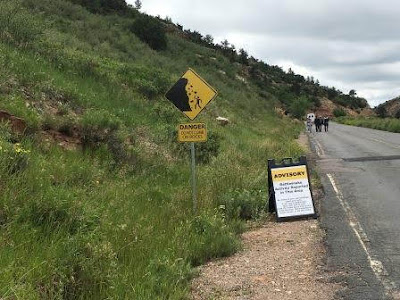 Having seen no rattlesnakes, prairie dogs, deer or anything else, a beetle that crossed the road caused me to yell, “WILDLIFE!!! WOOO!”  embarrassing my family in public yet again. 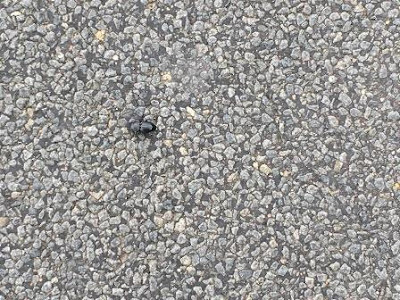 Down at the main parking area, a license plate reading “ICUP” proved Iowa has a far better sense of humor than any states near home.

We dug around in the giant gift shop for a while, but a peek in the mini museum showed it hadn’t updated. Crazy Hungry was looming, sending us to the car for a drive westward to El Rancho.

Someone had rented out the whole place and it was closed for the entire day.

Now well into crazy hungry land, and all focused on burgers we searched online for anything that would be close enough to stop the madness.  The first place we drove to was a Colorado version of the Five Guys fast food chain, nowhere near what we needed. 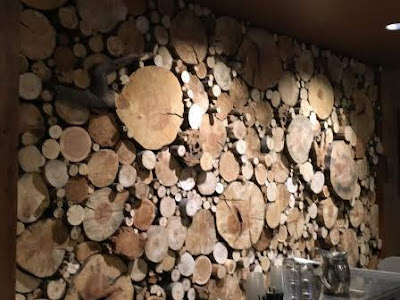 Then we stumbled on a place called “Wild Game.” While it did serve buffalo burgers, its name came more from the giant arcade connected to the bar/food area.  How deep in Crazy Hungry Land was I?  I ignored the arcade.

We ordered the planned, but relocated, buffalo burgers and wings.  While waiting, since the delay to forage meant we wouldn’t make it back to the Morrison Museum in time this day, we rearranged the rest of our - even less than locked down than we thought - schedule.

That whole Relaxed and Groovy thing in Colorado must be contagious.  There will never be a Denver Grid. 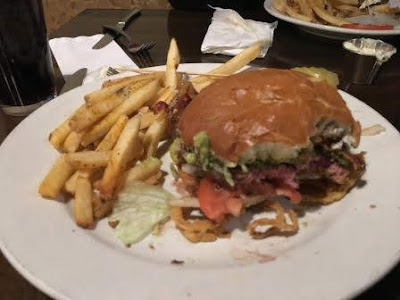 There were more toppings on the burgers, but they, the wings and the sides were far less flavorful.

Yes, future visits to El Rancho were demanded on that new “schedule.”

The time change was still affecting those of us not mainlining Diet Dew.  Rosa and Anabelle passed out cold on the way to Walmart to grab some more water on a rare drive that didn't feature a dancing wild pig.  We got home planning to make afternoon mass, and found Abuelita fast asleep.

Replanning again, I read a bit took a nap.

With unseasonable clouds looming once more, we drove over to the pool for a quick hot tub visit.  Rosa drove “Hi Ho Silver Hooray” for her first time behind the new Tucson’s wheel.  The tub felt way hotter than usual because the air was freezing.  Some of the ski places were still open in the mountains.  Thunder and rain interrupted another round of Disney World Trivia and we rushed home for more reading and television.

Still basking in leftover excitement from Godzilla: King of Monsters, we found Godzilla:Final Wars on Titi’s search engine based television.  It didn't catch her interest.  Anabelle and I realized that Final Wars on its own doesn't really hold up all that well as a movie. It works great as a celebration of all the Godzillaness that has come before, but that requires our insane levels of Kaiju fandom.

We went downstairs, and before I could finish changing and getting ready for bed, Anabelle was unconscious.

I like the plant impressions...and the excitement over the beetle.

At least someone is laughing at my jokes, even if it is delayed!
Thanx again for reading.