Now Shall You Deal with A Ruthless Terrorist Organization, and All the Powers of HELL!
Or
A Dream is a Wish Your Heart Makes To Defend Human Freedom! 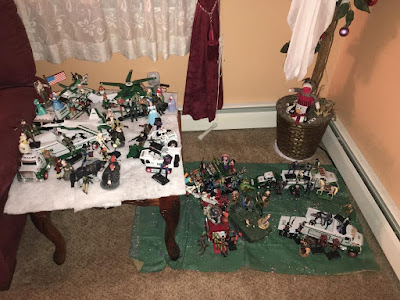 Welcome to the Twelfth excursion into this inanity!

The Cobras have gotten a major upgrade this year, and reached the verge of total victory.

Until recently, the Joes were engaged in a full evacuation off of Sluttbordet Plateau.  Cobra had a huge force advancing across the snow covered ground on our heroes after capturing  Clutch and the RAM Cycle, Cover Girl and Shipwreck on the Wolverine Missile Tank and Barbecue’s Fire Truck with whoever I stuck in there last year down below the mesa. 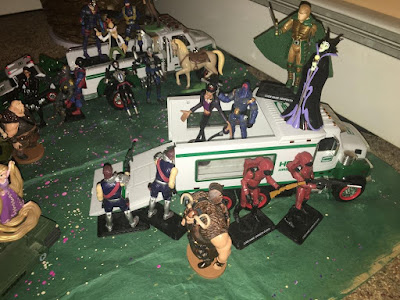 Serpentor used the magical powers of Cobra La to make contacts through dimensional breaches with some of the most powerful, evil sorcerery practitioners of the multiverse.  (Thank you comic book movies and shows for bringing this idea out of the dark depths of geekdom and into the public’s eye.)  Atop the Cobra Command Truck, he confers with Maleficent, the Mistress of All Evil, on the various diabolical enhancements she’s provided to his troops.  In the vehicle bed, Cobra Commander discusses the costs of Doctor Facilier bringing in his friends from the other side.

Tomax and Xamot, conveniently facing the other way in case I have yet again reversed their names on the stands, are rushing off in one direction.  Their Crimson Guard troops that were supposed to be protecting this meeting are also rushing off for some reason in another direction. It is possible that reason is named Vladimir. Clearly, the weirdness is, once again, not one sided. 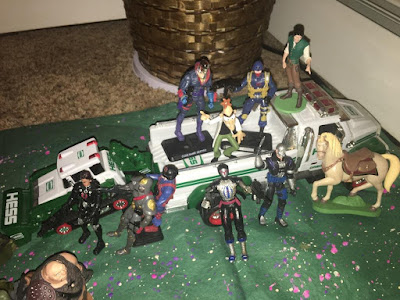 Over at the Combat Snow Plow Enhancement Vehicle, Cobra Officer Bertram is overseeing the technical work by Destro, the Baroness and one of their Iron Grenadiers, who is long overdue for a name in these proceedings.

The androids will not get a chance to activate, as one Eugene Fitzherbert is about to take out the gang from behind once he sends his semi-trusty steed Maximus to trample through the others after delivering him.

And smoldering a bit, naturally. 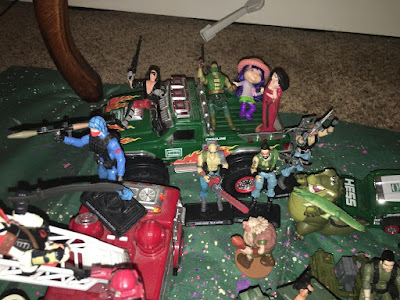 The “Mother Knows Best” attitude of Mother Gothel is a perfect fit for the unruly, chocolate donut and grape juice loving Dreadnoks. (Buzzer, Ripper and Torch)  Her dark and arcane knowledge aided them in capturing Joe forces, and allowed the practice of her special kind of tough love on the fruit scented (for reasons it’s no longer worth going into) Zanya.

However, now they have been chased back to Zartan’s Swamp Truck.  Shorty certainly volunteered to go after Mother Gothel, but it's the addition of Louis, and his ability to turn Crock Master’s pet, Senior Twinkles McFluffernutter, to the good guys’ side that is most effective.

Let’s take a quick peek up on Sluttbordet Plateau to find out how the Joes are bouncing back from a defeat that would have been much better illustrated if I could find all of Anabelle’s old collections in the attic, instead of only some of them. 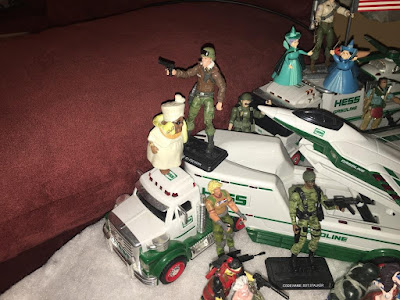 General Hawk, as always standing atop the Hiss Elimination Sky Striker launch vehicle, has gotten the team a little “funky voodoo magic, mon” from Mama Odie to even the odds.

Breaker relays his messages on where the enhancements are to be applied while Bombstrike spots locations that need help. As cool as he looks running into battle, Stalker gets an opportunity to hang back and mop up this year, due to an impressive combined strike force.

Ooh, the seeds of anticipation are sown.

Or perhaps I’m killing time until I remember what I had in mind when I set everything up. 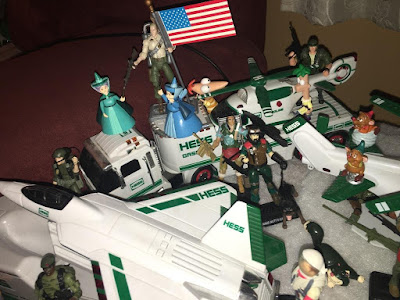 Nearby, Grunt combines his engineering skills with new pals Phineas and Ferb to soup up the captured “High-altitude Escape Suppression Strafer” chopper and convert the evacuation into a counter attack.  Ace is getting ready to fly support in the “Hiss Elimination Sky Striker” because HESS continues to stubbornly refuse to make a warplane big enough for him to fit in.  Nearby, Jacques and Gus look on with delight as Mutt and Junkyard chase off the interloper Lucifer.  Here’s hoping Spirit can control Freedom if and when he realizes rodents are common eagle chow.  Top Kick Duke is planning magically enhanced tactics for counterstrikes with Fauna and Merriweather.  Hey, if they could take out a fire breathing dragon and keep the near useless Prince Phillip from getting fried, just think what they can do for America's daring, highly-trained special mission force!  Flora is maintaining the link between dimensions on the other end of the connection and is not missing because I couldn’t find all of Anabelle’s old collections in the attic, instead of only some of them.

Back down below the Plateau, we can see the heroic magic working well. Rapunzel, her frying pan and Hook Hand remain behind after the liberation of the G. I. Joe combat vehicles.

Honestly, it’s never clear whose side the inexplicably appearing large monitor lizard is on. However, this time an alliance with Pascal has helped rescue Barbecue, and set in motion the reclamation of his Fire Truck. 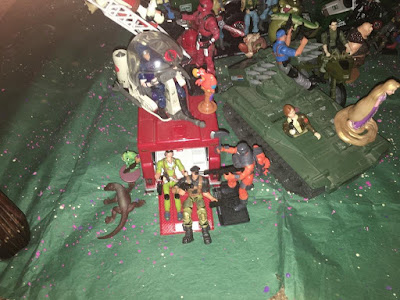 He’s broken Lady Jaye and Flint out of where they were held captive, and is not about to shoot Flint in the face for being a stinky and poorly balanced Spy Troops figure as it appears. (Gotta work on that placement there, Jeff.)  Wild Weasel is soon in for a surprise. He’s up top attempting to turn the truck into a flying combat craft by combining it with the Trubble Bubble, because my inability to control myself when making bizarre combinations of things knows no bounds.  Iago provides avionics insights.  The parrot’s presence indicates Jafar was clearly part of the magical enhancement of Cobra.  Jafar is currently off on a secret mission and not missing because I couldn’t find all of Anabelle’s old collections in the attic, instead of only some of them. 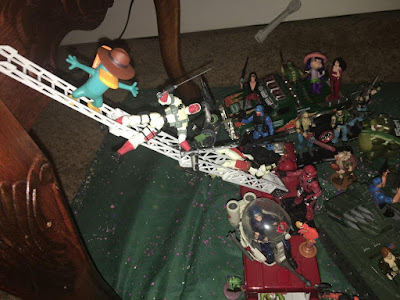 Cobra Martial Artists Storm Shadow, Generic Cobra Ninja 57-B and Firefly were scaling the ladder in order to join the assault team.  Evil Sorcery Enhancement of not, they’re no match for a magically charged Perry the Platypus!  No wonder that Cobra Bazooka Trooper looked so surprised in his other close ups. (That, or a paint application slip at the factory.) 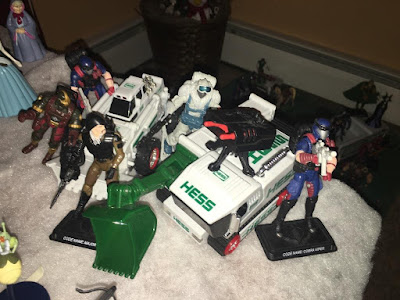 The Cobra Assault force on Sluttbordet Plateau is led by Major Bludd. The Major, the two Combat Snow Plows, the Snow Viper, the twin regular Vipers and the U.L.G. wielding Cobra Claw all have evil spells on them. Yet their attack is stopped and they have been forced to look away due to the brightness of Raymon’s butt. 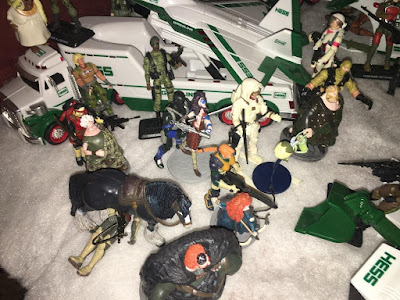 Taking advantage of this, the red headed archers Merida and Scarlett lead a massive charge of G I Joe hand to hand combat specialists (Jinx, Snake Eyes, Beachhead, and Snow Job [yes…Snow Job…]) along with Scottish Warlords (Dingwall, DunBroch, MacGuffin and King Fergus) into battle.  To continue his annual trend of gaining both insult and injury, the Cobra Desert Viper has been trodden on by Merida’s horse Angus.

While an incredible assault, once Ray-Ray’s posterior peters out, the mechanized and magicked Cobra troops could easily hold their own against the Highlander Hi-ya Horde.

Roadblock is climbing out of the cargo door, since the ravages of time on action figures manifest strongly on ankle joints and the "kung fu grip" that allows weapon holding.  Reinforcing profanity to get them to stand and hold tight can only go so far.

Flash, Gung Ho, Bazooka, and (of course) Blaine, Billy and Mac are about to unleash the pain on the Cobra beach head (snow head?) to prevent any resistance to the charging, ginger led group.

Yes, I know no one cares about every figure’s name, but if I don’t list them all, I can’t tell if one fell off and got kicked under the couch again.

Fairy Godmother whipped up an extra sparkly, gown matching, squad automatic weapon to allow Cinderella(*), amazingly sporting an expression far more full of vengeance than all of the soldiers, ninjas and terrorists combined, to lead the barrage. 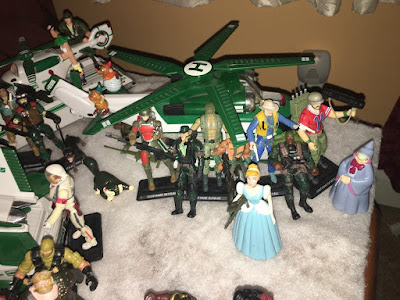 Will there ever be an explanation for the constantly increasing number of reptiles involved in this annual foolishness as time passes?

Will the battle expand uncontrollably if we ever find the other bin of Disney toys in the attic?

Tune in next year and find out!

Knowing You Can Dig A Little Deeper is Half the Battle to Find out Who You Are!


(*) Footnote-
This is an actual exchange that occurred in my home this year.
Anabelle- "There's a big space here."
Me- "I don't have anyone left."
Anabelle- "You could put Cinderella there."
Me- "Sure, in the middle of battle.  Doing what, exactly?
Firing a machine gun?"
Anabelle - "Exactly!!!!"
Me- "Don't be ridiculous."
*Followed by long thoughtful moments culminating in my putting off bedtime to fiddle with Action Figures in the living room well past midnight, along with realizing adding Lucifer and the Mice highlights why Mutt and Junkyard are there as well - Nice suggestion kiddo!* 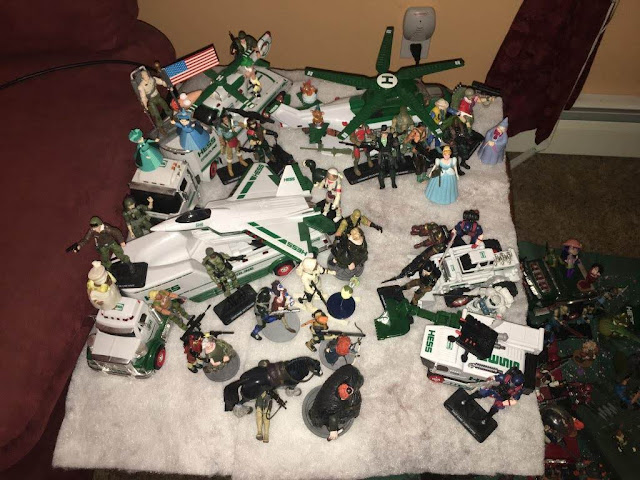 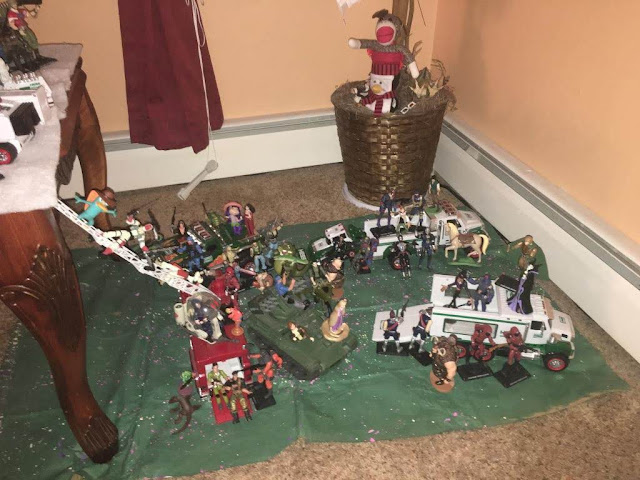 I like merida and scarlet together. Thats inspired. Picture quality isn’t very good . Are you using the same camera from 12 years ago?

It was an accidental pairing that worked well. Newer smartphone camera, same knees from 12 years ago that I have to balance on to take the shots.
thanx for playing!