Godzilla Vs Kong Vs Schedules

Godzilla vs. Kong was supposed to come out in March, but it has been delayed until next November.  I know there's viable reasons for improving the film and/ or adjusting competition, but my nerd rage at losing an awesome birthday present was pretty significant.

However it was nothing compared to my daughter's which took a deeply theatrical bent: 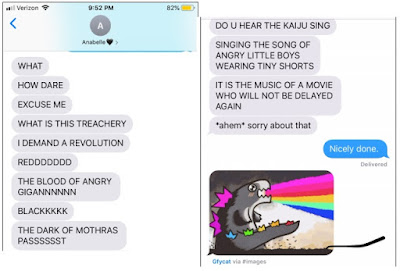 The reason for the move is clearly the under-performance of the incredibly awesome Godzilla King of the Monsters at the box office.

Since I feel that film was magnificent, and gets better with every viewing, I can find only two theories for this performance.


Theory 1)  A whole bunch of people went to see Godzilla 2014 and expressed disappointment (perhaps not as loudly as I , but still) at the lack of the title character's appearance, and the generally large amount of long boring stretches in the film.  This led to backlash, and a refusal to see last years epic Kaiju fun.  Kong of Skull Island did come out in between, and do well, but I feel the history of Kong connecting to what is perceived as the one of the most important films of all time, and the history of Godzilla connecting to what is perceived as cheesy rubber suit and bad dubbing films kept them disconnected in viewers minds.


Theory 2)  There simply aren't enough pure Godzilla movie fans in the world to have a correctly made one yield the required blockbuster level box office receipts.


So here's hoping there's enough truth to Theory 1 that the extra time lets more viewers bask in the awesomeness that is Godzilla King of the Monsters via home release leading to record attendance numbers for Godzilla Versus Kong!