There is a whole lot of mind expanding goodness in these books by Louis Sachar.

One of the biggest hitters of the series as a whole is the idea that some teachers will be both on your side, and very cool.  Note that it’s only some.  That’s the key difference in between these and other books.
There are kid’s series where the grownups are always portrayed as the unimaginative and unenlightened enemy, doing everything to stifle the creativity of the heroic kids.  (The Captain Underpants books come to mind. I’d love to put them in this series, but I’m not sure if an endless gang of fall on the floor hysterical poop jokes counts as “mind opening”.)  Other series show the teachers as kind, compassionate dispensers of wisdom, gently molding the children on the path to adulthood.  Or maybe just molding, they tend to smell a little rotten metaphorically speaking. (I’m looking at you Magic School Bus lady.)
Sideways School showcases a mix, albeit a little more extreme than reality. (Although I’m pretty sure my sixth grade math teacher was only an ear wiggle away from turning us into apples.)  It also shows the teachers as human.  Even Miss Jewels, and Louis, who are liked by all the children and do their best for them, are shown making mistakes and playing favorites from time to time.
I’m not advocating these books because of their nurturing life lessons, however. Any boring after school special can give you those. (Do they still have after school specials? With fifty billion channels; you’d think they have everything.  At this point if it doesn’t feature superheroes or a time traveling blue box, I’m not watching it.)
The books are funny, laugh out loud funny in many cases, but with increased intelligence in the humor than typical fare for that age group. More importantly some of it is downright surreal.  The tale (tail?) of Sammy the dead rat could be straight out of an old EC horror comic. There are also a few good introductions to nonlinear storytelling. (Those are a great way to get the kiddies ready for the aforementioned TV show with the blue box.)  All the bizarre stuff with name switching, people flavored ice cream, and the nonexistent 19th story serve to review standard school situations with a twisted angle. In the process of creating comedy, they also stretch the way these typical situations can be looked at. Giving kids a healthy dose of skepticism toward the reason of “That’s the way we’ve always done it,” is always a good thing.
There’s a fun and varied delivery of many mind opening topics.  Joe discovering that you can use the wrong method to get the right answer and still be incorrect is through comic exasperation. Bebe and Calvin are directly told that quality of work is usually better than quantity.  “Valoosh!” shows by example how trying new things one might be suspicious of can actually be fun.
Then, of course, there are the three Erics.  By making it a given that everyone expects all the Erics to behave the same when they are obviously completely different is a forceful display of what’s wrong with prejudices and stereotypes.   All you need to know about the disaster of the cartoon they tried to make of these books is that all three Erics looked exactly the same, in contradiction to the entire point of their existence in the stories. 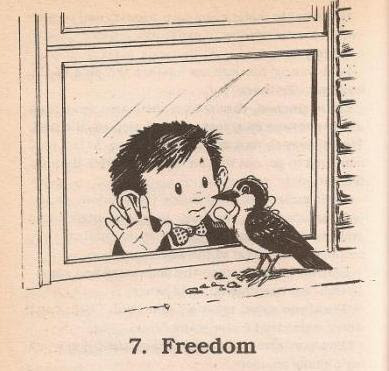 My absolute favorite story, “Freedom”, comes in the second book (Sideways School is Falling Down), featuring Myron.  It boils down to having to answer a single question.
“Do you want to be safe or free?”
In this post 9/11 world, it is vital that kids (and adults) understand that this choice exists. It doesn’t matter whether they answer it the same way every time. And it doesn’t matter which answer they choose. The fact that they know the choice exists and has to be made is the key.  Ben Franklin knew this, and it’s obvious which side he stood on:
“They who can give up essential liberty to obtain a little temporary safety deserve neither liberty nor safety.”
It’s not that he should be unconditionally agreed with, or disagreed with.  It’s the knowledge that one compromises the other, and you can’t have them both.  This is important from the top level, of how to write laws controlling the country, all the way down to deciding between sitting on a bench at the playground and climbing the monkey bars.
More important than that key view into human society though, is that the books have a lot of potato jokes.  I don’t know why, but I love potato jokes.
Posted by Jeff McGinley at 2:00 PM

Thanx much. Although, as I'm aspiring to be part of that media glut, perhaps I shouldn't comment on the rest.