Mostly Repeats in the Magic Kingdom (Because They Were That Good)
Friday was another day in the Magic Kingdom.  Not quite as empty as Tuesday was, but close enough to make everything easy.  Rosa and I got a large amount of compliments on our “I’m with the Beast” and “The Beast” shirts, especially from cast members.  Actually, we all got a large amount of compliments on our shirts from cast members.  I think this comes from the McGinley family tradition of keeping certain t-shirts preserved to wear when we go to the parks.  I wore some, that even though the answer to,

It also would have to include the line,

“before you were born.”

We paused on the way up Main Street to hear the Trolley singers perform the “Main Street USA” song from Anabelle’s video before getting to the castle in time for the show.  The “Dream Along with Mickey” show was a definite improvement over the Cinderella Coronation show we saw on our earlier visit.  Not only did it have Princesses (like the Coronation show did), but Mickey and other characters as well. (Mickey and Friends’ eyes and mouths could move, which is far creepier than you would expect.) It had many things you’d normally expect in a show that were lacking from the previous one: namely a plot, villains, and a stronger “believe in your dreams” ending.  It also apparently became the new home for the dispossessed “Way Hotter than You Dancers” from Mannequins on the recently closed Pleasure Island.  Anabelle’s continuous waving and cuteness gained her another wave from Cinderella and from Goofy as well.

After the show we went around to Fantasyland again, and met the Fairy Godmother.  Rosa said she looked like she needed to eat more, but since Anabelle was happy we didn’t say anything.  There was another grotto stop to see Anabelle’s favorite Ariel.

“Because I forgot to say, ‘I love you’ last time.”

Then we bounced from one Fantasyland ride to another until lunch time.  Rosa even scored a picture of the painting of Mr. Toad handing the Deed to Owl on the Pooh ride.

We had lunch at the Plaza on Main Street.  Everyone was greatly entertained when the Mayor and Hildegard came in, except for Anabelle who realized, “As long as he’s talking she [the waitress] won’t bring the food.”  There was almost a disaster when her grilled cheese sandwich was made with the “wrong cheese”. (Translation: anything that isn’t Muenster.) Luckily we had a breakthrough when the food did come.  Anabelle loved Rosa’s tuna fish. (“It’s just like Subway.”) Rosa took her sandwich apart, while I reassembled my club and we all ate in peace for a change.  The Plaza maintained its title to best sundaes in the park.

We saw Daisy Duck for the first time at the end of Main Street, but was told that line was closed as she was moving over to the shaded garden.  We waved to Chip and Dale (E & A) while we walked over.  Grandma was saying something to me about Daisy’s costume change, but I couldn’t hear her because my fingers were in my ears and I was going, “La la la la la.”

Anabelle decided she’d rather see the princesses in person again, instead of waving at them in the parade. We took the train around the park to Toontown.  Grandma got off in Frontierland to check out the new Deppness of the Pirates ride. Her boat got stuck at the end long enough for her to:

Turn on her camera,

And get a good (if unsanctioned) Captain Jack photo.

When our train stopped, Snow White was waving at us from near the station.  We were prepared for another line, but Anabelle said she didn’t want to see her.  Imagine our surprise the next day when she asked for a Snow White tattoo because, “She’s my second favorite.”  Nobel Prize winning mathematicians could not have plotted the actions of that child.

The Princess line was surprisingly short, possibly due to parade time.  Rosa and I also took pictures with them this time too.  Not only was our picture taken by the PhotoPass guys, but also our very professional looking daughter. (And here’s a special shout out to Ron, the PhotoPass guy who helped her.)

Anabelle decided that this was ride with Daddy day, which was very touching in Fantasyland.  Not so much, however, after the multiple rides in a row, with no line, on the very tight turns of Goofy’s Barnstormer Roller Coaster. (Her Mom and Grandma were thrilled, however.)  While she ran down the ramp for the third time yelling,

I staggered behind her saying,

“Daddy’s just gonna lie down here for a minute.”

I tried to explain to her that if she liked going on the small coaster over and over, that she would like the big one, but this was really no place for a logical discussion and the idea was shot down immediately.  Oh yeah - and one time, the coaster stopped right at the top of the high hill.  I tried to pretend I was as excited as she was, while also trying not to wet myself…yay.  Anabelle had some fun in the Mouseses’ Houses again before we left Toontown.  I liked Minnie’s Palm Tree. 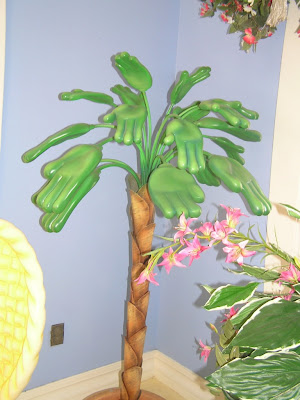 If I thought I was dizzy from the coaster, I was in for quite a surprise in Tomorrowland.  We took several rides together on Buzz Lightyear, mostly with her “driving”.  The last time through, she had us spin the whole way. I’m lucky I made it out of the gift shop without knocking a shelf over.

We took a relaxing People Mover ride to recover, before heading over to see Belle in the Fairytale Garden.  It was a cute show where she pulled kids from the audience to tell her story, and then stayed afterwards for pictures.  Although we had seen Belle other places in the big fancy yellow ball gown, this was the first time we saw her in the more plain, reading a book, blue dress.  That’s probably why I got all stupid and speechless when she complimented our shirts, because…it’s Belle.
(The magic can hit you at any time, or any age.)

We then tried the newly opened Monster’s Inc. Laugh floor, a truly hysterical show. I laughed most when audience members were put on screen to be the different characters:

Anabelle seemed to enjoy it while we were there.  She saw herself on screen because we were sitting right in front of the Buddy Boil dancers, and Marty Wazowski even told her knock knock joke:

Knock Knock,
Who’s there?
Dishes,
Dishes who?
Dishes Me!

With a slightly modified punch line, and mispronunciation of Boonton, because of my lack of skill at text messaging.  However, once we left she never wanted to see it again, deciding that she was afraid of Roz (hooookay, then).

The next stop was a return to Fantasyland to let Anabelle take her promised Dumbo ride for coming to Daddy’s comedy club thing. Thanks to Rosa’s nearly gone voice, and my failure at learning enough Spanish, I tended not to know about promises like this, leading me to say and do stupid things contrary to them, causing some family issues on line (and in the Dino Playground the day before);  another indication that my linguistics skills needed work.   I’m pretty sure this was the first time I ever went on Dumbo.  Grandma got the FASTPASSes for a last Peter Pan, and then we had a decision to make.  Anabelle had been asking every day to spend time in the pool again, but we’d been getting home late.  After Dumbo she sat down in the middle of Fantasyland like she was ready for a nap.  We asked her, “Do you want to go to the hotel early tonight so you can go to the pool, or stay and see the light parade again?”  All of her energy suddenly returned at the prospect of seeing the parade again, and sharing it with Mommy.

We grabbed dinner in Pinocchio’s in Fantasyland, each picking something that we hoped Anabelle could salvage bits of. (In a startling upset, for those keeping score, chicken beat pizza.) Then it was time for our Peter Pan ride, and one more Small World, because, hey…it’s there.

We had yet another great cast member help us find a seat.  We asked her (Helen?) if we could sit on an empty part of the curb near her, and she told us we could, but the parade didn’t come around that part of the circle.  She then asked if we wanted the absolute best seats for the parade.  Obviously we said yes, and she took another family and us behind a light up stuff sales cart at the front of the Walt Disney “Out Infidel” statue circle.  She told us if we sat there, the parade would come straight toward us, and then turn in front of us.  I love Disney people.  Rosa, Anabelle and I sat down, and used the bags to secure a perimeter around Grandma’s feet.  The parade viewing was everything promised and it was fun watching Rosa go from trying to take pictures to joining Anabelle in waving at characters. They got personal waves from Cinderella again, and also Ariel, Captain Hook, and Chip and Dale (…you know).  Once more, the magic hits everyone.

Anabelle stopped for some more of her own random poses on the way out of Main Street, and we made it home in time for the Water Pageant.  We went down to the dock without telling her why and loitered until the music started.  Like everything else we had to convince her she wanted to see, she asked if we could see it again the remaining nights.

Please Click Here to return to the Introduction which has links to the other Disney Days.
Posted by Jeff McGinley at 2:00 PM