The adventure began by waking up at Stupid O’clock in the morning, shambling into the car, and aiming west in hopes that we’d reach our destination in time to settle in and look around. 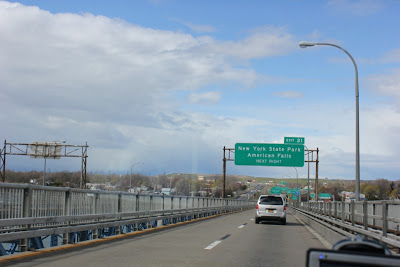 The first of several stops was for breakfast in Pennsylvania.  We had the option of a McDonald’s, however directly across the street was a Waffle House.  I figured, since this was our first excursion to an entirely new destination, we should try something other than the preprocessed sovereign of the Fast Food kingdom.  I also figured that in comparison to McDonald’s, the Waffle House would yield us more authentic and healthier cuisine.

Just about everything on the Waffle House menu was authentically fried and covered in butter.  An undressed grilled chicken wrap was an unusual but coronarily sound choice for my breakfast, while Rosa and Anabelle greatly enjoyed their eggs.  Something on the seat, that we tried not to think about, got Anabelle’s winter coat all wet.  We placed it over the stuff in the back to dry out (not the last time drying a coat was needed on this trip) and she changed to a lighter one as the day warmed up.  A bit past breakfast we turned northwards, bringing a slight flurry with us up into New York, and pretty much all the way to Canada. (In case they needed to import snow.)

There were several pretty to look at, but uneventful, other stops along the way to fill the gas tank and empty ourselves.  One of these was for lunch at the Julius Ponds rest area on the New York Thruway.  Stopping only long enough for we three Doctor Who fans, in our three Doctor Who shirts,  to make innumerable “Come Along Ponds” jokes, we entered to find one of the last Roy Rogers restaurants left in creation.

Roy Rogers!  Makers of fried chicken better than KFC and roast beef sandwiches better than…darn near anyone I guess.

I was seriously hacked off now that I’m not allowed to eat just about anything they make.

Fed and rested we finished passing though the remainder of New York, eventually following signs for the Rainbow Bridge.  My daughter was very disappointed that the bridge looked absolutely nothing like The Bifrost.

Well before we reached the bridge, we could already see the giant plume of mist from the falls.  Fortunately Rosa was there to tell Anabelle what it was, because my infinitely limited travel experience caused me to dismiss it as a nearby smoke stack, rather than the distant evidence of a wonder of nature. 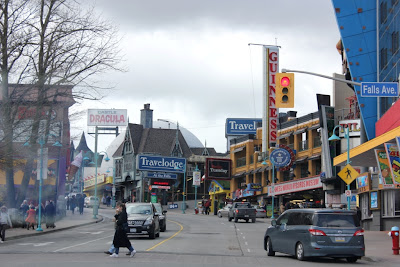 Once we crossed into Canada finding our way to Clifton Hill was easy, using the huge Skywheel as a sighting method.  We turned left off the midway and showcase lined street and realized we’d truly arrived.  The attraction list mentioned a dinosaur themed mini golf course.  What it didn’t mention was: 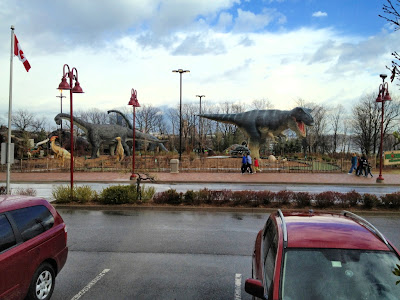 We even ended up with a dinosaur room view, containing a Tyrannosaur, a Parasaurolophus (Anabelle’s favorite) and others.  Forget the fancy schmancy falls view locations, this was our home.

Continuing the long tradition of McGinley family trips established by my parents:
- Anabelle excitedly goofed around in the hotel room
- Rosa unpacked
- I fell asleep

Before zonking out, due to my total lack of travel experience I realized an oversight. I had forgotten Canada was another country.  For years the only place I ever travelled was Disney World, meaning I expected England and Mexico to be a short walk from our location, with a giant, singing animatronics filled geometric sphere somewhere in the vicinity.  The good news is our personal cell phone plan covered us in Canada.  The bad news (or possibly better news) was that my work phone plan didn’t, forcing me to switch it to airplane mode and render it as a backup camera for most of the trip.  One of the few “that didn’t taste as good as I hoped” moments came upon arrival when I tried the in room coffee maker. Not only was the coffee terrible, but Anabelle accidently spilled it on herself trying to confirm my opinion, forcing her to change out of her Doctor Who shirt, and preventing us all from matching at dinner.  Next time, I’ll stick with just the nap.

Anabelle had never seen the inside of a Planet Hollywood, leading us to decide to go to dinner at the giant one that greeted us as we crossed the Rainbow Bridge.  Despite its prime location and the presence of decent sized crowds of people in the area, its doors were locked.  I ran in to the Sheraton the restaurant was affiliated with while Rosa and Anabelle continued down the street, becoming increasingly colder and hungrier. The desk clerk seemed of the opinion that Planet Hollywood was open, in fact he was so sure of it I became convinced we had gone to the wrong entrance…until he let me know there was only one entrance.  After a great many phone calls (by both him and my freezing family) I came to the conclusion that it must be closed.  He still seemed to think it was open, but had no explanation for their phones remaining unanswered.  I caught up with the ladies and we settled for the nearby Hard Rock Café, since we had some success eating in one of those in Atlantic City.

Our usual stellar luck held out, and a party of sixty arrived in the bar shortly after we sat down, leading to us waiting about an hour for Anabelle’s ten dollar hot dog. 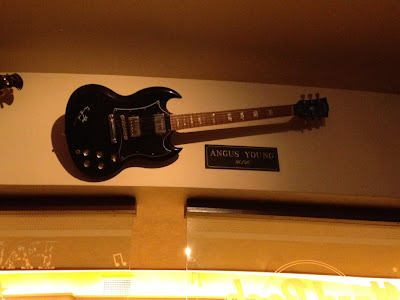 I had long since passed “crazy hungry” and was pushing to leave on several occasions, but the waitress would always wander by and say the food was “almost ready”.  When it finally did come, the roast chicken (which they were out of in Atlantic City…see if I order that again) was “almost frozen.”  The horde that had taken over the bar apparently destroyed the place’s ability to function.  The manager not only came to our table, but to every surrounding table to address similar issues and provide free, very late but very tasty, replacements.

After dinner we looked more closely at Clifton Hill on our return route. It is amazing how many sights, stores and attractions they’ve crammed into that street.  It does generate some odd bedfellows.  The Burger King shares a building with, and is partially over the “House of Frankenstein” – one of several spooky walk through houses.  For some reason both parties thought it would be a good idea to have a large, goofy looking bust of the monster atop the structure holding a giant hamburger. I can’t imagine that image is beneficial to sales of either establishment. 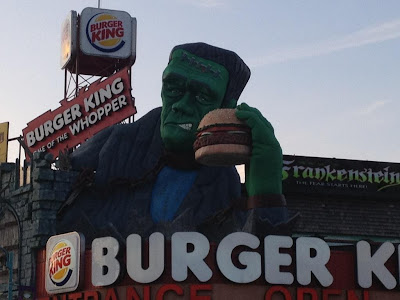 Down one side street we saw what appeared to be a fascinating entry into the list of multiple Fun Houses: An Upside Down house.  However, upon reaching it we learned it was not an attraction, but merely an actual upside down house that seemed to have been left in a hotel parking lot for no immediately obvious reason 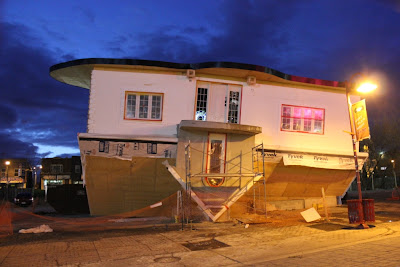 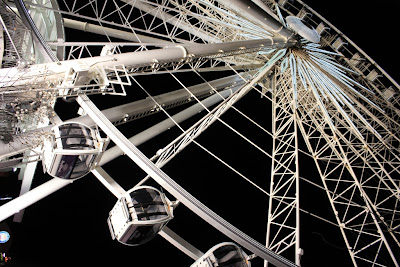 We knew we wanted to see the falls lit up at night and figured a night trip on the Skywheel would be a good way to do that. Also, we hoped it would make it easier on Rosa, who has a fear of heights triggered by moving enclosed areas. She shut her eyes going over the Rainbow Bridge, and in fact during most of the Skywheel ride, but she did peek at the falls, and prove to Anabelle you can face your fears. 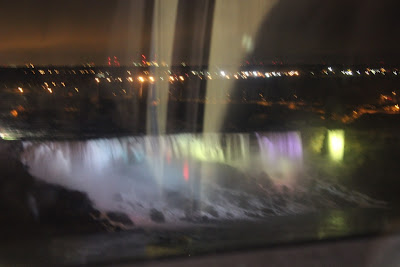 Anabelle and I looked at the falls a bit.  Even lit up they were kind of hard to see, especially since we were completely distracted by the awesome display of dinosaurs below us! 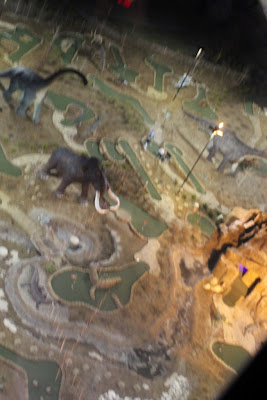 Finally working our way back to the hotel after an incredibly long day, we sampled the pool.  There was an extra salty smell, similar to a place we stayed near Boston. It also had the same bizarre side effect of making me absolutely freezing cold.  However, Anabelle had no issue with it and swam around a great deal, and also jumped in multiple times.  Her adventureishness kept me warm enough to enjoy watching her.  Once we returned to the room, we all collapsed.  We had honestly expected this to be an Atlantic City type restful vacation, bringing DVDs to watch, games to play and books to read for the theoretical “down time” in the hotel room.  The only thing this trip had in common with Atlantic City was the presence of a Ripley’s Believe it or Not Museum which we had no desire to enter.   It ended up being far more like the forced march (we walked everywhere) - out when it opens back when it closes - Disney World type vacation. In fact the only reading I got done on the trip was proofing the story of an old Disney World vacation to fill enough blog post time to allow me write the chronicle of this vacation.

Click Here for Day 2
Posted by Jeff McGinley at 2:00 PM