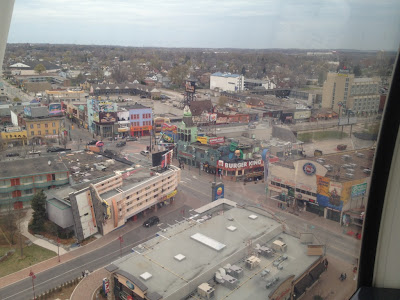 The day of the trip home started, yet again, in the breakfast room.  Joining in with the other hotel guests, we dined in our pajamas, making it feel homier.  Being used to the New York metropolitan area was once again an advantage as the room was definitely “more crowded” on Saturday but nowhere near what we would actually call “crowded.” 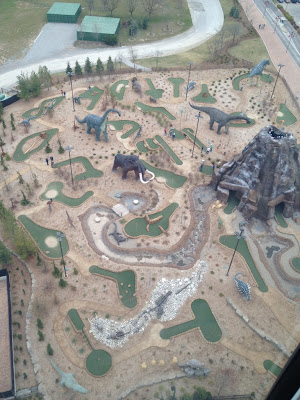 In order to spend more time out and about after packing a bit, there was no morning return to the pool. We started out with our first and only daytime Skywheel trip. It was easier to take pictures of the far more visible falls (and of course, the dinosaurs) from on high, while Rosa tried to take pictures of us (and we of her). 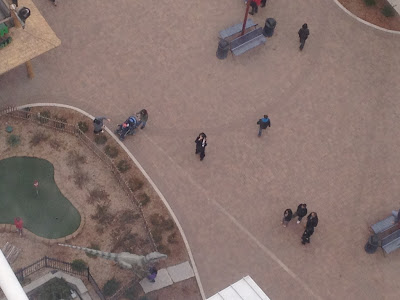 Then we all wandered down to what was planned to be our last picture walk along the river, stopping only to mail some postcards to insure they’d get a Canadian postmark, and fondle the one Raptor we missed on the dinosaur golf course.  There was a slight drizzle, but since there’s kind of a heavy falls generated mist hanging over the entire area, it didn’t impede us that much.  Anabelle took a great picture of us as Rosa took one of her in front of the falls.  The look on our faces is quite priceless as she started to back up toward the railing in order to focus better. 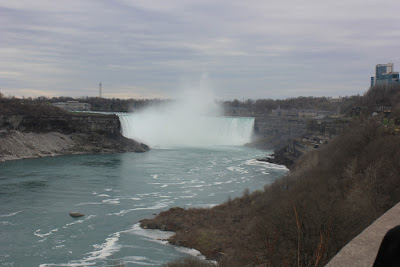 We let Rosa “focus” on getting some more detailed artsy shots of the falls while I took Anabelle up to the Great Canadian Midway to spend the tokens on our Attraction Card.  This would have been an excellent plan if we did not employ another excellent plan that let Rosa have easy access to certain items by putting them in the backpack I was carrying.  Since these items included her artsy extra long lens, and her phone, the plans combined to something less than excellence.

Anabelle had a great time playing the various games both before and after Rosa caught up with us.  I joined in a bit on a two person “Jurassic Park” themed shooter on the more and more dinosaur themed vacation.  She cashed in her tickets for some random Canadian plastic crap (exactly like the American plastic crap in this kind of arcade, but with more pictures of maple leaves.)  The last thing she did was to sit in a Cinderella Carriage ride, because she connects every vacation to Disney too.

By this point it was time to pack up and check out.  Thanks to the minimal pool time, I didn’t get to do any juggling outside the country.  I tossed the clubs around a bit in the parking lot just to get credit (“If you didn’t juggle there, you weren’t’ there.”) and Rosa said, “It would have been cool if you did it down by the falls.”  That gave us a goal before we left.

Once again, we enjoyed a fantastic (and late) lunch.  This time we walked away from the falls instead of toward them in search of variety.  We found a place that a later on-line search told us was another chain owned by Kelsey’s. (So much for variety.) Montana’s Bar and Grill had excellent barbecuey food with drinks in mason jars in a very “Wilderness Lodge” style setting. (Yes, all of my travel references are Disney based; can’t be helped really.) 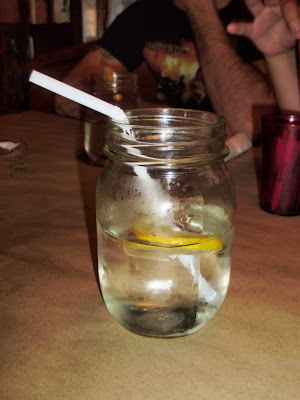 The waitress noticed I’d removed the skin from my chicken and seemed upset that I was missing out on the best part. (She, in fact, offered to eat it.)  When I mentioned I couldn’t because of a heart issue, she said maybe it was a blessing in disguise because we all looked so fit. My family took this as quite a compliment. It must have been true, what possible reason could someone in the food service industry who makes her living off tips have for lying to us?

Full and happy, we strolled back down for what was REALLY our last picture walk along the river, to allow juggling in view of the falls, which required shedding my loose fitting, but water resistant, windbreaker.  Rosa got a little more overzealous with the pictures than usual. (That’s saying quite a bit.)  Looking at them afterwards, we realized that if they were all printed, it could be a flip book and show the whole routine.  If my lips were read during the flipping of that book, they could clearly be seen saying – 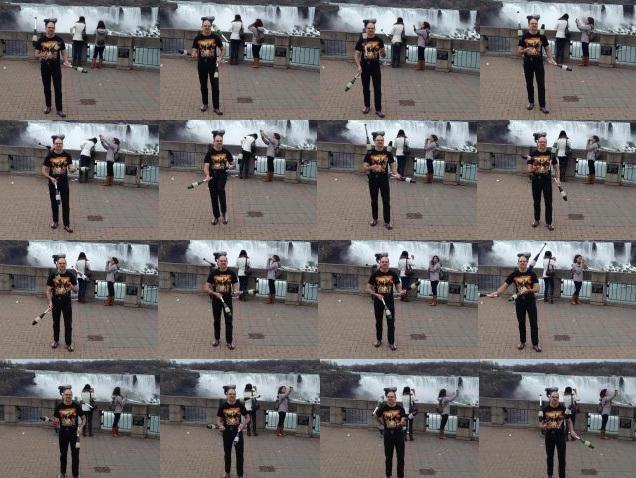 “Finish with the pictures already; I’m freezing my butt off here.”

I took Anabelle on a return to Ghost Blasters while Rosa did some final shopping.  My score was about half that of the first time through, because I was trying to take pictures.  Anabelle had a much less emotionally stressful ride than the first time because we didn’t shoot the last target until we were well past it.

Our final stop was too see if the “buy two get one free” Fudge coupon would be worth it.  Since one slab of fudge would be WAY more than any (or in fact all) of us needed, it didn’t make much sense to end up with triple that amount to melt all over the car interior.  With some alternate snacks in hand, we battened down the hatches on the Hyundai, and – as the sun set over our prehistoric pals -  headed back into the U.S. of A. 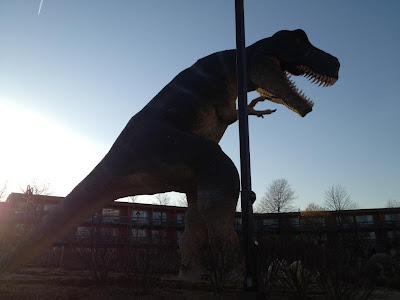 Anabelle’s reserves were completely drained, and license plate list or no, she was out cold almost as soon as we hit the thruway.  She woke up shortly before we stopped for gas prompting a search for dinner to begin.  The GPS had been mostly friendly on the trip, but we did have to be careful of its practical joke of pointing out rest stops that were only accessible from the other direction of the highway, or in fact, another highway entirely.

When she awoke, along one of the emptier stretches of road, she asked if we were home. When Rosa and I told her not even close, she wanted to know where we were. Our simultaneous answers had her in absolute hysterics for several miles, and still when we parked to eat. She insisted on calling Grandma to let her know we were somewhere between “East Jesus” and “Boogers” New York.

The Clifton Springs rest stop (I guess they couldn’t fit “Boogers and East Jesus Crossings” on the sign) turned out to be the location with the other last remaining Roy Rogers restaurant left in creation. Also, there was a Starbucks.  Every time we passed a Starbucks around Clifton Hill, which was pretty frequently as they are located about every six feet, we’d do the same thing:

First we’d say, “MMMMM…Starbucks.”
Then we’d look at the prices, including the “You can walk to Niagara Falls while holding your coffee” surcharge, and say, “Nah.”

The Starbucks at our location seemed a great way to fill the missed craving and caffeinate me for the drive home.  Unfortunately, being an extremely new coffee drinker, I didn’t reckon with the difference in speed which coffee and soda work their way through the digestive system. 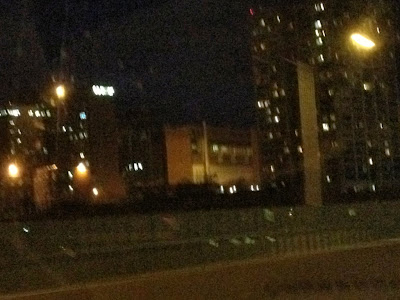 The lights of Syracuse, which turned out to be the last sign of civilization were fading behind us.  Shortly after leaving the relative frequency of rest stops on the thruway, the Starbucks decided it needed to leave me.  Needless to say, Tina the GPS’s “Oops, not this route,” jokes weren’t funny anymore. I had reached cranky, but not completely unmanageable when I succeeded in picking the only exit on the road we travelled that didn’t have a fast food joint or gas station in view of the highway. Rather it was an extended stretch of unlit wooded road with vague signs indicating possible locations.  Then, I did become completely unmanageable, causing the trip through much of Pennsylvania to be far more uncomfortable than it should have.

The previous disaster made me reluctant to trust any “This Exit” signs afterward, and the next rest stop we reached (that was actually on our side of the highway) was merely a restroom stop.  Both we and the car were desperately in need of a stop for refueling.

Once we reached a region I have some familiarity with, the Poconos, I exited at the first gas station we could see from the highway.  I was driving on Route 80, and my brain must have assumed we were back in New Jersey.  After waiting far longer than is not embarrassing for the attendant, I started pumping the Pennsylvania gas myself, and ran in to ask about nearby diners.  There was a Perkins only two exits east of us, which served nicely to fill us up after the car was.  Anabelle and I enjoyed “midnight breakfast” while Rosa sampled one final entry for the “Best Sweet Potato Fries” contest.

Normally the drive home from the Pocono’s is quite short, clocking in at around an hour.  However, the last sixty minutes of a drive that started eight hours earlier in an entirely different country feels anything but short.  We reached our home in one piece, and fell deep into unconsciousness firmly believing that we would go back to Niagara for an even longer stretch next time…we might even see the falls again once we finished with the dinosaurs. 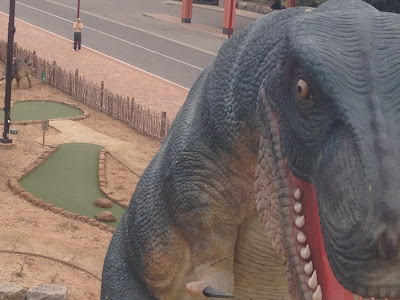 Once again, traveling with the McGinley's in this manner is a great way to spend a rainy morning. Especially this one. Haha!