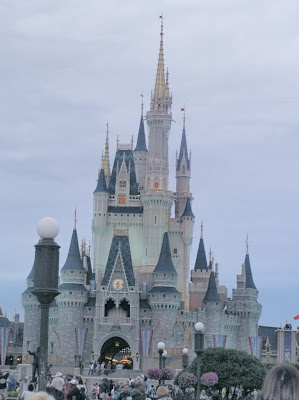 With four seasons worth of clothes stuffed into several bags, we all converged at Grandma’s early in the AM to pile into the extremely large van she ordered to haul us out to Newark Airport, where we met up with everyone else from the state evacuating to Disney World while New Jersey got its annual November manicure.  After passing through security like a shoeless camel through the eye of a needle, Grandma gave the girls an autograph book and giant pen each while we waited for the flight. The airline apparently played a practical joke on us, as the new seats we got to keep us all in one spot on the plane weren’t really ours, So Kim, Dave and Veronica hiked back next to the guy with the yellow toe, while Grandma and Aurora stayed with our family.  Anabelle read almost the whole flight down. (That’s my girl!)

Kim included Anabelle’s name on the thank you candy she always gives the flight crew, so all three of them got little pilot wings.

Kim and Dave won the “Who will fall asleep on what ride first” pool by nodding off on the way down. The flight was uninterrupted and uneventful (if bumpy) bringing us to sunny Orlando (except for the sunny part).

We eventually made it to the Magic Express Bus. (Somehow doubling the number of travelers easily more than doubles the amount of assembly time and bathroom breaks.)  Nearly as traditional as the McGinley EPCOT Thunderstorm is the McGinley Arrival Downpour and this one was no exception.  Therefore, we could barely see the POP Century resort as we pulled in.

En route, Rosa downloaded the Disney World App to her phone, allowing her to check line lengths and character locations.  The POP honored our request to be near the main building where the food and buses are, which put us the 60’s wing.

“Turn right when you get to the giant Play Doh can.”
Where else do you get directions like that? 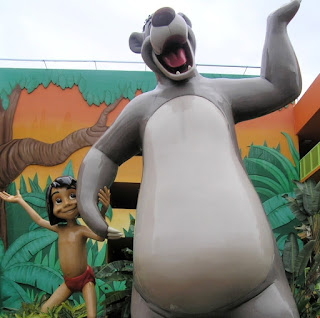 This was also near the giant Baloo and Mowgli statue. (Bonus!)  As we left stuff in our rooms the last little nubby thing broke off the Darth Vader cap I’d used to prevent headburn on the last few trips.  Kim and Grandma initially suggested ways to fix it; until Rosa showed them the over a decade old headgear and all the women in my family demanded I replace it.

We now pause for a moment of silence for my poor hat.

Since there’s no meal service on airlines now, we stopped for a much needed dinner in the Everything POP food court.  After our refresher and Kim and Dave’s intro to the complexities of the Disney Dining Plan (one entrée, one beverage and one desert is not nearly as simple as it sounds), we sat down to eat. I tried to use the “Q-tip” (quit taking it personally) talk I heard at a communications seminar to try to head off any arguments ahead of time.

It worked pretty well, no one yelled at each other for forty five minutes.

and you have to subtract the time the kids were arguing about who could hold the q-tips,

but it was something.

Following this exercise and a toast to Grandma, we went for our first bus ride. They seemed to have adopted a new, more efficient system for the buses; where instead of timed arrivals from each location, there were a pile of buses at each stop that picked a destination when a line filled up.  Getting Kim’s double wide monstrosity of a stroller on to the bus, and then holding it in place proved quite a challenge.

We all entered the Magic Kingdom and did the collective, “We’re here,” happy sigh as we walked up Main Street.  Our first attempts at group and individual pictures were clunky and disorganized, but as the week passed we turned into Photo Pass ninjas, hopping in and out of shots with dazzling grace, calling out secret code patterns for the kids

And pushing Grandma to the middle of group shots so she can’t cover herself with the picture frame (as she is sneakily known to do).

In Fantasy Land I hurriedly called everyone to the Cinderella fountain. “What, Oh guy who reads everything?” Kim asked.  I showed them what I read (surprise!) online.

If you look straight at the fountain, the painted crown is above Cinderella’s head, but if you squat down to the height of a child, it looks like she’s wearing it. Kim also noticed the bit I forgot about, that the shadows at night take the shape of her ball gown. Much more subtle than the way the Tower of Terror blends into the architecture of Morocco when seen from EPCOT, but still nifty. 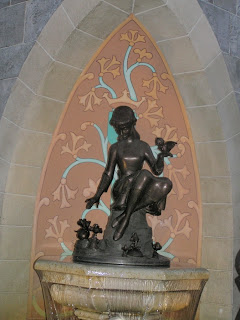 With three little girls, our only first stop could be the Small World complete with sing along.

Surprise #1:  The long shut down before we came was not to add characters, but to reroute the line behind the boarding area, preserving the purity of the attraction.
Surprise #2:  Some kind of small hungry insect lived on the ride, and Rosa and Anabelle ended up with giant bites on their calves as we walked to the next attraction. (Thanx to new airline safety rules we had to put the bug spray in the checked bags instead of the carry on. While this arguably makes the plane safer, it obviously did not make my family’s legs safer.)
Surprise #3: Anabelle decided (like the first trip of the last visit) to be so terrified of the hippo (normally her favorite part) that she wouldn’t even look at it. 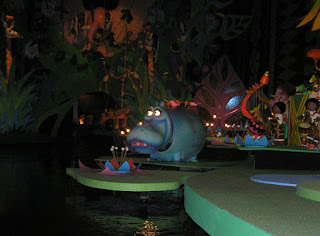 Our next stop on our classic beginning was the newly named “Prince Charming Regal Carrousel”, for a fun if itchy ride.  Rosa’s bites got so bad she took benadryl for a couple of days, making the parks probably even MORE colorful for her than the rest of us.

Since we got in late, after these two rides it was time to find the good spot where the parade comes right at you (that the cast member showed us on our previous visit) for the Electric Light Parade (back when it was still Spectromagic, sniff sniff). Due to general confusion, some squabbling and the rain, we ended up directly in front of the castle, which is the wrong side of the circle.

I managed to cut through the circle, find our old spot, and then radio back to the troops to form up on my position.  We stood there in the rain for a while until the parade came, and holding their light up wands, the girls got waves from many of the characters.

They even were given a personal Grumpy stare,
from Grumpy,
by using the innovative method of shouting:
“Hey Grumpy!”

The updated parade was a true spectacle, not as lyrical as Spectromagic, but with a great deal of energy all its own. Everyone really enjoyed the experience, and it was actually worth it. 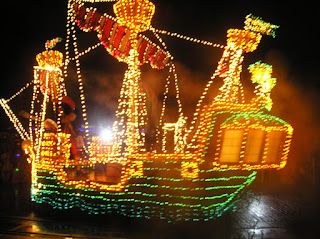 There were a couple odd moments in the parade, both due to the rain, I think.

One was that the floats would get stuck, and the road zamboni guy would have to drive out to great cheers from the crowd (and happy dances from the oft stranded Dopey) and rescue them.

The other was several large frogs (or one very mobile frog) kept hopping out in the path of the floats till someone came and shoo it, or pick it up. (Once or twice one hopped into the crowd, fortunately not near us, I’d hate to be the reason Disney has to implements Orange and Green parade status based on heart conditions like Mission Space has.)

After an even more interesting time getting the monster stroller into the end of the day crowded bus, we drove back to the POP watching the fireworks though the bus windows (which didn’t look right).  Aurora fell asleep leaning on Anabelle (Awwwwww), and Anabelle fell asleep with her face in Rosa’s hand. Rosa’s arm fell asleep because she was afraid if she moved, both kids would have tumbled to the floor.  After some quick unpacking, and a mug refill (those who know, know) everyone collapsed for the night.

Well, most of the night.

Disney air conditioners always blow, and for some reason, sometimes automatically change settings back to cold, even on the rare occasions that it IS cold in the room.  Add that to Anabelle’s propensity to kick off the covers in a normal size bed, never mind a double, and I was up every hour or so either adjusting or covering.

The benefit of this is that I was able to recharge the myriad batteries each night.