The Next Generation Watches the Original Crew - Part 2 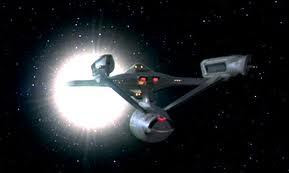 We finally finished the Star Trek films.  There was a large gap between the first post and this one, mostly due to detours through Middle Earth, and the entire series of Reba.

See, my wife does have an influence on viewing selections in our home. 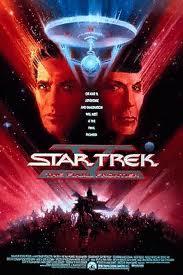 Making fun of Star Trek V is part and parcel of the fandom, and I would have been very happy to join in with scads of snarky comments and “witty” remarks.

My daughter, being unencumbered by preconceived notions and external inputs, found absolutely nothing wrong with it.

When I asked her what her favorite bits were, she answered, "Everything."

The mix of familiar faces, multiple aliens (old and new) and varied introductions held her attention throughout.

In general, the odd numbered Star Trek movies often get labeled as “the bad ones,” but it isn’t that simple.

While they may lack the action and storyline of their even numbered counterparts, I think it’s more that the odd numbered films (at least with the original cast) have been more character studies than straight adventure stories. The interactions and connections between the crew become more important than the events occurring around them. 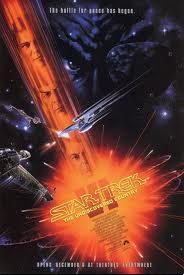 We had another well placed time break between the films before Star Trek VI, which allowed the changes aging had made to the crew to sink in better.

My daughter found Valeris weird and suspicious from the get go,
possibly due to her becoming savvier with this genre of picture…

Or possibly because Kim Cattral is naturally weird and suspicious.

Since she’s a big fan of the Three Investigators series, she was intrigued by the mystery portion of the story, even though most of the political stuff soared over her head. She knew people were plotting bad things, and was upset at Kirk and McCoy being railroaded, but didn’t follow many of the details.

Despite that, there was a large amount of excitement and cheering at all the ending rescue racing and, of course, the final shots of the original gang.  There were only two breaks in the cheering.

The first was when I had to pause the film to provide details of the “Gas sensing torpedo.”
As always, my wife was very helpful, making Klingon bodily function jokes.

The second was to answer why Sulu was the only other “Captain” who got his own ship. Somewhere in the middle of my explanation of naval ranks and grades, Honorary Titles, and military careers desired, she started to robotically smile and nod.

Therefore, I gave up and said, “Because George Takei is awesome,” while pressing play.  She easily accepted this.

I continue to believe that this movie is a great capstone and finale for the original crew’s adventures.  My daughter agreed that their autographs were a cool and proper send off.

We didn’t segue into the Next Generation films for two reasons.

The first is:  I’ve seen Generations.

I can sum up the problem with it thusly:

That was not Captain Kirk.

Having his fantasy existence be living on a horse farm means that William Shatner was the one trapped in the Nexus.

Captain Kirk would have been on the bridge of the Enterprise.
To quote Mr. Scott:
“The original. No bloody A, B, C, or D.”

The second reason came from tracking the original crew’s appearances in a couple of Next Generation shows. 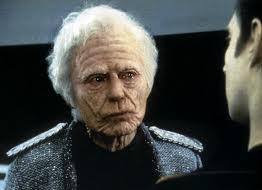 I hadn’t seen this episode since it premiered in 1987.

Therefore it is understandable that I thought McCoy’s Cameo was at the start of the first hour, not the second. We started watching from the beginning, and I thought she might get caught up in the story anyway.

My daughter yelled to fast forward, as soon as I realized what I wanted her to see was coming much later.  The characters and plot didn’t “engage” her at all.

She even companied that the credits were boring, and they were not:
“A jazzy tune like the original.”

But she did think it was really nice to see McCoy.

I found it pretty funny that they went out of their way to point out Data was a more annoying version of Spock right from the get go. Our next stop on the Original Crew Cameo Trek was Scotty’s appearance on the Enterprise D.

She was not at all happy with Geordi‘s behavior toward Scotty, in full knowledge that the new ship’s engineer had more experience and technical knowhow in the situations shown. She plain didn’t like his attitude, and wanted to know, “What’s that thing on his face?”

She also flat out stated the new crew was not as good as the original, and not funny.

I was very proud when she commented upon the appearance of the Holodeck generated original bridge:
“That’s the REAL Enterprise.”

In watching the scene with Picard and Scotty discussing the Enterprise and Stargazer, I found an understanding of why Picard kept himself a man apart from his crew, unlike Kirk’s close relationships.

I got an incredibly strong vibe, probably due to how much I like Patrick Stewart in other things, that he used to be a kick butt old school Starfleet officer, like the original crew was. Over time he had to conform to the new, more P.C. family friendly Starfleet, and was forced to suffer all the wimpy losers he had to share a bridge with.

At the end of the episode, my daughter was still unhappy with the Next Generation’s treatment of our favorite engineer.

“They’re sending him out on that tiny little ship, WITH NO BATHROOM!?” 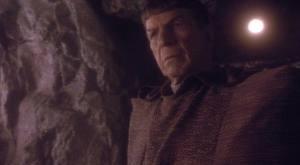 Yes, I know this two parter came out the season before “Relics” but it fits better in the viewing order this way, for reasons that will shortly be clear.

My daughter was very happy to see Spock, but didn’t care about much else, except the presence of non-Starfleet “bumpy head Klingons.”

She didn’t have much to say since she was busy playing and ignoring everyone but Spock and Sarek (whose death saddened her), but I noticed a couple of things.

Once again Picard was the only one who could hold his own with the original crew, and their fathers.
I truly believe that in a similar situation, any of the “First Generation” officers would have pulled off Riker's interrogation of the fat Ferengi though sheer mental intimidation, without having to throw fish on him and grab his collar in a very unprofessional and unconvincing manner.

The reason we watched Spock’s trip to Romulus after Scotty’s return, was it took a great effort to get my daughter to maintain any interest in the new crew at all.

She had no desire to see any other episodes, and even the promise of Captain Sulu in a flashback of an episode of Voyager was met with a direct, “No.” 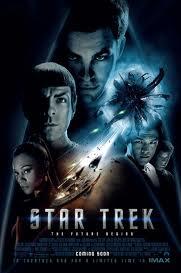 Back to where my daughter’s Star Trek viewing began.  The reboot of the franchise will inevitably become “her” Star Trek as it grows and progresses with her.

Both time travel and alternate universes are common in our home. This meant she fully understood that the timeline had to diverge, because otherwise:
“If he killed Spock, he won’t be there in the future to be mad at him, and the movie won’t happen.”

She’s well versed in the classics.

This time through she noted changes from the original timeline, but I noticed a shift in her as the movie progressed.  She went from being only excited and happy about references and appearances from the Original Series, to being purely caught up in the story:

Yelling in surprise at monsters,
Cheering for action scenes,
Worrying when the heroes were in danger,
Saddened by the tragedy,
Laughing out loud at the silly stuff. (i.e. Any time Scotty opens his mouth)

She was fully invested in the new adventures, regardless of where they came from.

Although I was truly proud when, following a little squeal of joy at Leonard Nimoy’s appearance in the ice cave, she stated:

We’ll all see you in the theater this summer for:
Star Trek Into Darkness

For the record- my guess is John Harrison really turns out to be Garth of Izar.

This based solely on the fact that it would be awesome. 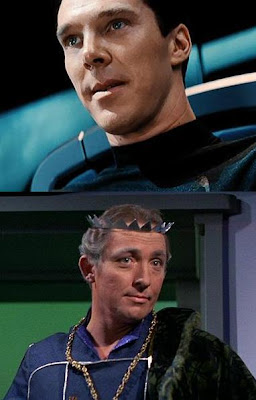 He had a stroke over the holidays, and is working toward recovery now.  When asked how people could help out to cover bills and stuff, instead of asking for direct donations, his wife recommended buying his e-books and print-to-order books as the money comes more quickly and directly to him than his other published items.

In the odd world that the Internet has created, we can now feel like we know total strangers well:
His writing has provided me with much entertainment.
His blog is always funny and thought provoking.
When we didn't have the right channel, I followed Doctor Who through his wife's blog reviews.

Lastly, they have a daughter about the same age as mine, and I've read many accounts on both their blogs of experiencing similar geek related things with her.

Because of that, and the fact that I can heartily recommend anything the man writes,  I'd like to help them by passing on the link to those books:

Recover soon Mr. David, a bunch of us count on you for intelligent laughs...especially your family.

Was there any reaction to men wearing skirts in 'Encounter at Farpoint'? - my husband wouldnt watch it for weeks just because of that. And re: Shatners acting - having seen the real thing a couple of times I still think his death scene in Generations is one of the best 'dying on screen' efforts I've ever seen ......... and I think the inclusion of horses was just to show off his real life riding and 'getting an 'orse to walk sideways' skills whilst being obviously trussed up in a whale bone corset and trying to control a 'toup' that looked far too out of place......... was by way of a 'golden handshake'.... bless him! But then - what do I know?

Thanx for posting. Absolutely nothing caught her attention in "Farpoint" either the bits we watched or when we fast forwarded. I told her about the "dress" uniforms tonight, and she said, "That's silly." but expressed no interest in seeing them.

I got enough Shatner horse jokes in Star Trek V. And if he didn't die in Generations, he could have come back in the new one to help hand off the keys to the new kids. No death scene is worth that.

In general, it's hard to out-awesome Shatner.