Now that Disney owns Star Wars, they have announced Episodes VII-IX and a myriad of expanded universe movies.  All that’s missing from these announcements is a new Disnified home release of the original films.

Disney loves to throw music videos on their discs, featuring popular current performers on Radio Disney singing songs from, or homages to, the film in question.

Therefore, I would like to submit this little diddy, to the tune of Taylor Swift’s “We are Never Ever Getting Back Together,” for the home release of The Empire Strikes Back: Super Duper Special Edition. It is a musical celebration of Luke’s big “NO!” right after,
“No… I am your father.”
Which USED to be the greatest reveal in cinema history, before the prequels spoiled it by revealing Vader’s entire back story. (Not that I’m still bitter or anything.)

Feel free to blame my daughter for getting yet another girly song stuck in my head, forcing me to release this on an unsuspecting public.  This one's for you, kiddo! 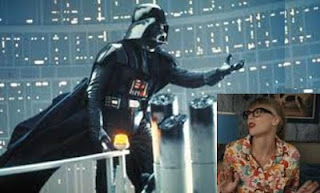 Here’s the music for those fortunately free from this corner of pop culture.  Many thanx to my wife for finding a fake orchestra version, that surpassed the fake piano version I originally was using.

I remember when we first met up
I flew
Down the trench you shot me and I lost,
R-2
You tracked me down, destroyed the base on Hoth
Now you, want me, by your side, what?

Lured me out to Bespin as you planned
You say,
Help me -we can make the Empire change,
Trust me.
Remember how you hacked off my right hand?
You say,
“I’m daddy, so join me.”
I cry out, “It can’t be”

I’m thinking that my exit plan was daft
That’s me,
falling while I’m screaming down this shaft
And you,
will call to me while I recoup and whine
with some side of the force that’s much darker than mine

Apologies to Ms. Swift, John Williams, the Walt Disney Corporation, and the Star Wars Fan Club of America.
If you enjoyed this…apologies to you too.
And click here for more Star Wars parodies.
Posted by Jeff McGinley at 2:00 PM

High praise for a collection of bad rhymes to get a dopey song out of my head, but I'll take it.