The folks over at the Doctor Who message board were talking about how to line up James Bond actor with actors who played the Doctor, and  it seemed like a fun idea.

Also, I spent so much time Revisiting the Doctors last week, I had no time for anything more coherent.

They are in Bond order, as there’s less of them.

I’m  not necessarily looking at chronology, but more at themes in common, which gives connections ranging from giant weird leaps of logic to the bleedin’ obvious: 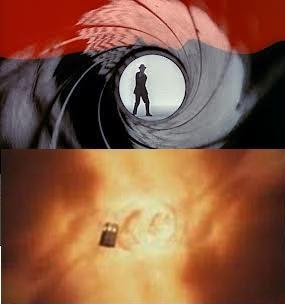 Sean Connery=Tom Baker
Defined the role in the classic series.
Great deadpan delivery of one liners.
For many old school fans, the one true version.
(Arguably could be William Hartnell, but I think Baker eclipsed him in popularity in the fandom, and recognizability outside of it.)

George Lazenby=Paul McGann
Only one shot in the title role.
Better than the material they were given.
Story had levels of romance not seen before.
Probably would have been successful given more chances.

Roger Moore=Patrick Troughton
Proved the series could be successful with a replacement lead.
Lighter and goofier than the original incarnation, with more sci-fi elements.
Added many features which would remain a staple of the franchise.
(Could be Jon Pertwee, as both their adventures were highly influenced by, but lighter and more gadgety versions of, the early  James Bond films)

Timothy Dalton=Colin Baker
Rougher, harsher,  more violent version of the character.
Went back to source for portrayal. (Dalton-Novels/Baker-Hartnell’s disposition)
Tenure cut very short partially due to fan reception, but mostly due to behind the scenes issues.
(The latter applies to McCoy as well, but the in story stuff makes it Baker.)

Peirce Brosnan=Matt Smith
Defined the role for a later generation, on screen as well as on merchandise.
The series started to bring back many elements from the past, updated for modern times.
Newer fans familiar with classic version of the series, but may not have seen it as it’s “old fashioned.”
Present for an important anniversary story.
(A few years ago this would have been Number Ten, but I think Smith’s popularity in the US and on the swag has passed Tennant at this point.)

Daniel Craig=Christopher Eccleston
Restarted the franchise after dormancy.
Stories and individual are stripped down the basics.
Haunted and angry version of the character.
Um…very short hair?

Bonus Points:
David Niven=Rowan Atkinson
Appeared in an affectionate parody featuring many versions of their character.
Project worked on by some individuals with ties to the actual franchise.
Lead showed they could have done well as a serious version of the role.
Featured an actor as bearded actual villain of the series who would have been awesome in an adventure taking place in the regular cannon.


Peter Davison was simply far too nice to consider issuing him a Licence to Kill.
Posted by Jeff McGinley at 2:00 PM

As I'm always more salacious than the norm I'd like to see a mapping of Bond-girls to Companions.

They talked about that on the message board a little. There's way too many of both for me to try anything with the time I had.

Although, I'd bet both groups would have a really hard time putting up with the mannerisms of the other guy.

Best crossovers would be Holly Goodhead from Moonraker as a brainy scientist traveling with the Doctor.

And naive Jo Grant as an easily influenced bond girl.