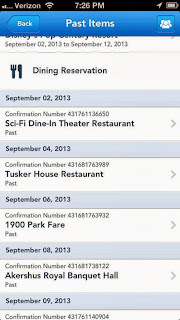 July 26, 2013: T-38
Received an e-mail from the Happy Disney People reminding us to plan all the stuff we’ve already planned.  It’s still nice to hear from them!

Found Anabelle’s list of pressed Disney pennies. This will come in very handy in case we can’t remember which ones she has. The list will be placed in the little bag of shiny pennies and quarters, which we inevitably forget any time we go someplace with penny pressing machines.  I should probably save it on my phone too.

July 27, 2013: T-37
Itunes randomizer is terrible. Not only does it fixate on albums, but it tends to forget where it was when we disconnect.  To prevent hearing the same songs over and over, I rescramble the Disney play list in reverse order of “most recently played” time, and we kill shuffle mode.  The solution works through a couple of drives, until we realize every time we listen, it changes what is “most recently played.” Duh.  We switch to alphabetical after a bit.

July 28, 2013: T-36
We all stay up much later than planned when, in an effort to find old autograph books, the bins full of Disney stuff from previous trips are unearthed and opened.  Many exciting things are learned, such as the fact that we save way too many napkins, and that Disney mints never appear to expire.

July 29, 2013: T-35
Clench time.  Looks like the family favorite Lion King show will be spared when Avatar moves in. Today’s announcement says it is moving to Africa in 2014, where it belongs. Here’s hoping it stays open where it is for another forty days or so, otherwise I’m gonna be traveling with some very cranky ladies.
Our little packet with the Magic Express luggage tags show up!  They know we’ve heeded the call!

August 1, 2013: T-32
All the costumes, shirts, and alternates laid out on the Grid are piled securely away to insure they don’t end up in the wash when we need to pack.

August 2, 2013: T-31
Only a month to go!  Oddly having a cardiac procedure in the way prevented me from seeing how close to answering the call we were.

August 7, 2013: T-26
Dodged another bullet.  Spaceship Earth refurbishment closing is shortly before we arrive.  Our luck can’t hold out, can it?

August 8, 2013: T-25
In a staggering coincidence, Anabelle starts choosing Disney movies each night to watch.  We may never see the final two Rocky films now, as even I have a hard time coming up with an argument as to why we should watch the Rise and Fall of Tommy Gunn instead of classics of Western animation.

August 9, 2013: T-24
Park hours confirmed as unchanged from when the Grid was locked down.  A slight benefit to planning a little later than we probably should have: there are fewer changes after things are scheduled.

August 11, 2013: T-22
Anabelle is reminded that Gargoyles was made by Disney. We may finish that set of DVDs after a two year hiatus now.

August 12, 2013: T-21
Another reason to stay on Disney property:  Walt didn’t build on limestone like the place a couple miles west that led to a SIXTY FOOT DIAMETER, FIFTEEN FOOT DEEP sinkhole swallowing part of a nearby resort today.

August 13, 2013: T-20
Oddly, as the number of days shortens, we reach a “no man’s land” area.  Most of the planning is done. The fun of “next month we’ll be in *insert park here* on this day is over because, next month, we’ll be right back in boring life again.  Though the time to the trip is short, every event, good or bad, between now and leaving, looks more like a giant obstacle than anything else.

To add to the downward mood shift a check on why the carousel seems to be closed all the time yields that while its refurbishment will be complete before we go, the wondrously silly Jungle Cruise will be down for repairs during our visit.  A Disney Vacation without the back side of water…how sad.

August 14, 2013: T-19
Limo for pick up is booked.  I can now spend the next nineteen days worrying that I didn’t have it come early enough, even though I called back three minutes after booking it to change the pickup to a half an hour sooner. Yes, I have issues.

August 15, 2013: T-18
Mission Space celebrates its 10th anniversary.  I guess I should stop hoping for “Horizons, the Next Generation,” huh?

August 16, 2013: T-17
Anabelle senses the amount of stress at work as I try to cram everything I need to do before taking two days off for the Duchess County Fair and almost two weeks off for the Disney trip.  She sends a post-it-note in with me which reads,
“Dear Work,
Please don’t make Daddy’s head explode.
He has to go to Disney.
Love,
Anabelle”

August 17, 2013: T-16
The e-mail comes telling us we’ve been picked to test out the Magic Band RF armbands that activate everything (Room, Fastpass, park admission, etc). I wonder how they select who gets to try it?
With us it could be :
A) Obvious pre planning and booking
B) Multiple previous visits
C) Completely random selection
My mind tells me its “C” but my heart would like to believe “A” or “B” had something to do with it.

August 18, 2013: T-15
Ordered the customized Magic Bands, after Anabelle went to bed, picking her current favorite color - green. Of course she wanted pink, but it was too late to change the next day…the joys of parenthood.
She is comforted by the Happy Disney Lady on the phone who tells her the green is very pretty, and they sell decorations for the bands. (Of course they do.)
The Magic Bands are linked to our Disney account making us eligible to try FastPass Plus, pre scheduling of FastPasses before leaving home…
I think I need a bigger grid.

August 19, 2013: T-14
We try the FastPass Plus option to choose three events on the first day. The system was very good at scheduling them around a dining reservation…three hours later than our actual dining reservation.  Guess this is why they need the system tested. A phone call with yet another Happy (and Helpful) Disney person explained how once you pick the events, there’s much more freedom to slide their time around on the “itinerary” page.  Yes, “My Disney Experience” now uses the power of newfangled technology to build a sanctioned Grid for us…we’ve always been ahead of our time when it comes to Disney.

Speaking of being ahead of our time:  We call in to request a specific room location (near the hub of everything) and are told it is too soon, but check in online anyway, and call back for the request in a couple of days.  Upon checking in online we find the place to make those requests.  Disney efficiency seems to be surpassing itself without it noticing.

Click Below to Continue:
Planning Phase 5 - All Systems Go

I cannot believe you can pre schedule fast passes! Also, loved your previous note that Rosa wanted her own line in the grid. Finally, every time I call it 'MGM' (again see your previous post), someone says to me 'isn't it NOT MGM anymore?' It will always be MGM to me.

Fast Pass Plus works very cool. I'm hoping it stays as an added Disney Property Guest perk for those who stay on site and plan ahead, as an addition to the existing system. It isn't quite flexible enough to stand on its own. It can be used in many places regular fast passes can't adding to it being a better augmentation than replacement.

Rosa's quiter about it, but joins in pretty quickly. (And her authentic Peruvian Spanish usually nets us at least one double ride on the Grand Fiesta Tour without getting out of the boat!)

If I put DS on the grid, I'd never know where to go. (Although, oddly, the bignon-Disney attractions there - Indiana Jones, Star Wars, Twilight Zone - aren't MGM, yet, I still dont care.)