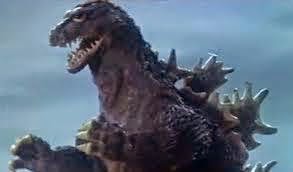 My plan worked and my goofy descriptions of the Godzilla films I’ve loved my entire life enticed my daughter into wanting to see them.

The result of this bit of sneakiness led me to watch the full spread of twenty-eight classic appearances of the King of Monsters (plus some bonus ones of his friends, and his cousin Earl) TWICE in six months.

Ah, the hidden wonders of parenthood.

I probably should (again) mention the patience of my wife – who, while she enjoys them, is extraordinarily glad she only had to sit through them once.

With that much Kaiju permeating my very soul, I couldn’t very well let the actual November 3rd Fiftieth Anniversary date get too far past without acknowledgement.

However, I think one thing everyone involved can agree upon is that I’ve talked FAR too much about Godzilla this year.

Therefore, here are some extremely short and general impressions my daughter passed along while joining me in yet another of my long standing fandoms.

She has an incredibly hard time focusing on black and white images.  This is true whether or not she thinks they are entertaining, and explains why it’s taking incredibly long for us to watch the Lone Ranger TV series.  She enjoys them, but her mind wanders.

While a classic, the original is an extremely old film, which she pointed out by mock crying out, “OH NO, A GUY IN A SUIT!” fairly frequently.

Actually, she yelled that in all of the films, mostly to annoy me.

Her biggest effects based complaint however, had more to do with the massively horrified overreaction to the Oxygen Destroyer’s dissolving of fish.

Yeah, we probably could have skipped this one.  The 1954 original gets referenced far too often, and is a classic, making watching it a given. However, since this one featured the premier of Anguirus, was the only other one not in color, and more importantly, was very short, she gave it a shot.

She found Anguirus a watchable mix of ugly and awesome, and did enjoy the antics of Kobayashi, the Goofy Guy.  She stated rather strongly, as did my wife, that he shouldn’t have died.

She yelled, “What the heck?!” out loud almost every time the Paleontologist (Dr. Yamane) gave any kind of scientific explanation.  She decided he really needed some retraining under Mr. Fordyce, her particularly awesome, and biology based, science teacher.

Watching Mothra was her idea.  I told her it and Rodan were made between the last and next Godzilla film, but watching them at this point (or at all) wasn’t needed.

(It was needed to watch the Godzilla films proper.  As I have mentioned, we have interesting definitions of “need” in this home.)

Overall she found another single Kaiju fighting the military action to be, “Kinda boring.”  On the positive side, it did provide some call back moments when we reached the Millennium series.  While she cheered the Shobijin appearances, after this experience she voted to skip Rodan.

Color, wrestling style giant monster battles, and a major dose of ridiculousness were finally fully introduced to the mix.
Much like the world at large, this one caught her attention and spurred her futher into the series.

Having seen the “real” King Kong before, she found the Toho incarnation rather creepy.

Also, much like the world at large, she found Kong’s affinity with lightning baffling.

She asked about other monsters and I kept telling her it was a “Tako,” since Mr. Tako featured prominently, without further explanation. Her response to the appearance of Daidako (aka. Oodako) the theoretically enormous slimy octopus was a single word:

With a better and more complex story, improved effects and, of course, Godzilla and the Fairies together- this one fully captured her into the fandom for the first time in the series.

Needless to say, there was more cheering for the Shobijin than their original appearance.

While she found Mothra’s adult form excessively cute, she thought the caterpillars were, “creepy looking.”

This, combined with the King of Monsters growing on her as the films progressed, may have added to her reaction to the ugly bugs webbing up the Big G in the climax.

The film’s actions created a marvelous demonstration about how suspension of disbelief tends to be a lumpy and inconsistent affair in even the strangest films.

She had no problem with the sibling rivalry like Kaiju combat, the monster conversations, or the complete reversal from them being attackers to protectors.  However, the fact that the Mothra larva needed to bite Godzilla’s tail to be dragged to their next location dumbfounded her.

She also pointed out that the Shobijin’s translations of “Monster Speak” were likely completely wrong, and they were just bluffing.

Two important elements came out of the first Toho Monster Mash:
A) She thought Rodan was really cute, establishing a precedent that may lead us to watching his solo film some day.

B) She decided the sound of Ghidorah’s heads bobbing in flight was, “flubba flubba flubba,” establishing a precedent for referring to creatures by made up sound effects that would continue through the series.

Invasion of the Astro Monster 1965

By this point, my daughter had fully embraced the amusement park nature of the movies, frequently taking part in audience participation by yelling at the screen.

Or, “BOOM- AWESOME!” for the finishing explosion.

She viewed the films somewhat more analytically than a typical Godzilla movie viewer, though that didn’t stop her from making the required, “Flubba flubba flubba,” noise as needed.

She expressed puzzlement at bars being soundproof and equal confusion as for the reasoning behind the Xiliens pointy toed elf shoes.  Why all the women were Miss Namikawa when all the men were different was a pretty good question too.

After everything he went through, she decided the inventor’s greatest achievement wasn’t the annoying sound of the “lady alarm,” but that his glasses “invented a way to stay on.”

Her most penetrating question raised an excellent point about the film’s antagonists:

“If the aliens number everything (like Monster Zero-One, Monster Zero-Two, etc) why do they call their planet ‘X’?”

Once again, Toho was recommended to get a download from Mr. Fordyce’s 5th Grade Invertebrate Biology class.  This was primarily because Ebirah’s eyes extended much too far out of their sockets. The fact that he was well above the size that his exoskeleton could support his mass passed by without comment.

She did get bored for a little while in the middle during the Bondian set up plot, until the Kaiju showed up. Since Toho didn’t constantly cut away from the monsters like some other versions of Godzilla I could mention (*cough*Legendary2014*cough*) my daughter’s interest held after that.

The Fauxbijin didn’t impress her all that much either.  During the extended dance mix native village Kaiju wake up song, complete with the chief in the giant feather hat, she asked:
“Why don’t they just poke Mothra?”


As this film is most similar to the previous one, so were her reactions.

The (not really) native girl was pretty.

Toho needs to talk to her science teacher because mantises can’t fly, and spiders shouldn’t shoot webs from their mouth, but from their butt.

Instead of creating her own sound effect, she imitated Minilla.

The goofy little dude has appeal.

Her favorite in the first half of the Showa series: