Today we continue my daughter’s impressions of the King of Monsters’ exploits.

This one isn’t part of the official Godzilla chain, but we watched in at the appropriate time anyway.  Again, the deviation was her choice, stemming from the existence of a Mechani Kong toy in our home…who attended Godzilla’s birthday party.

She found Susan’s voice to be an annoying screech.
This placed her in agreement with…
Well…
Pretty much everyone who’s seen the film,

Mechani Kong was found to be even cuter than his toy counterpart.
Significantly adding to the cuteness was her performing a little disco dance to his beeping sound effects.

She recognized Akira Takarada!
Not only in a, “Hey that’s Astronaut Fuji” way, but by name.

Her belief that Madame X was pretty and therefore shouldn’t have died may be a flawed evaluation. But if it gets us watching You Only Live Twice I’m not correcting her yet.

This Kaiju Collection film was accompanied by a large amount of jumping, cheering and general excitement.

She enjoyed it as well.

Rodan was still cute, and all the monsters together were cool, though she did wonder what took Minilla so long to arrive.

My answer of, “His stumpy little legs,” wasn’t appreciated.

Since they go out of their way to highlight life in the exciting far flung future world of 1997 my daughter continually inquired:

“Do you remember this? Was it on the news?”

That was her main reaction to this stylistic departure.

Gabera brought some of her biggest outbursts.


“What the heck is up with the green thing?”

The only bright spots for her were:
A) Being able to go, “YAY STOCK FOOTAGE!”
B) Learning Minilla’s voice was female in the original Japanese version, and that she didn’t have to hear it.

Although his excessive use of donkey noises was about as bad as his voice.

She decided Ichiro was a whacko who shouldn’t have knocked down the paint guy thing.

At the end of the movie, she prepared her list of suggestions for the young lead:


2) Keep your relationship with monsters to yourself so people don't think you are a loony.


3) Don't use monster fighting skills on other children before school.

She summarized her reaction in a very direct manner:
“I know why the director got fired.”

Still she got into it, yelling in shock at Hedorah, mostly because he was gross.
There was also some yelling of confusion, like when the “Fish head guy” thought throwing fire at the pollution monster was a good idea.

And yes, the kid does need longer pants.

Between the stock footage, and a few genuinely cool and or disturbing moments, this film has a Kaiju sized amount of padding.

She made her “Flubba flubba flubba” noise for Ghidorah (and “chigga chigga chigga” for Gigan’s belly saw,) but occupied herself with other distractions for much of this one.  It was my second time through recently, and I nodded off a bit.

Still, the cockroach reveal elicited an honest “EEEK!” while the talking monsters generated a similar horrified exclamation to mine the first time I saw it.

There was much hopping about, hand clapping, and woohoo-ing at my childhood favorite entry into the series.

It’s not perfect, having some similar padding problems as Gigan’s premier.  The lunatic awesomeness of the rest overwhelms the slow parts, however.

She liked King Caesar in general, particularly his rainbow eye beam reflection trick, and his cool song.  She’s also a much bigger fan of the Godzilla’s “cute” appearance in the late Showa films.

She had only two big questions, in a movie filled with craziness and plot holes which could easily generate hundreds.

1) Why did Mechagodzilla wait for her to finish singing?
2) What the heck is up with the gorillas?

Titanosuarus, last of the Showa Kaiju was not a big hit in our home.  This is because he sounded like, and I quote, “An annoying elephant writhing in pain.”

We both couldn’t help laughing repeatedly at the name “Itchy Nosey.” Sometimes it’s hard to figure out who the ten year old is.

Android girl’s eye flashes were creepy, but overall didn’t distract her from enjoying the end of this phase.

Especially when Godzilla was “ON FIRE!!!!”

There was no contest in picking her favorite of the latter Showa films. 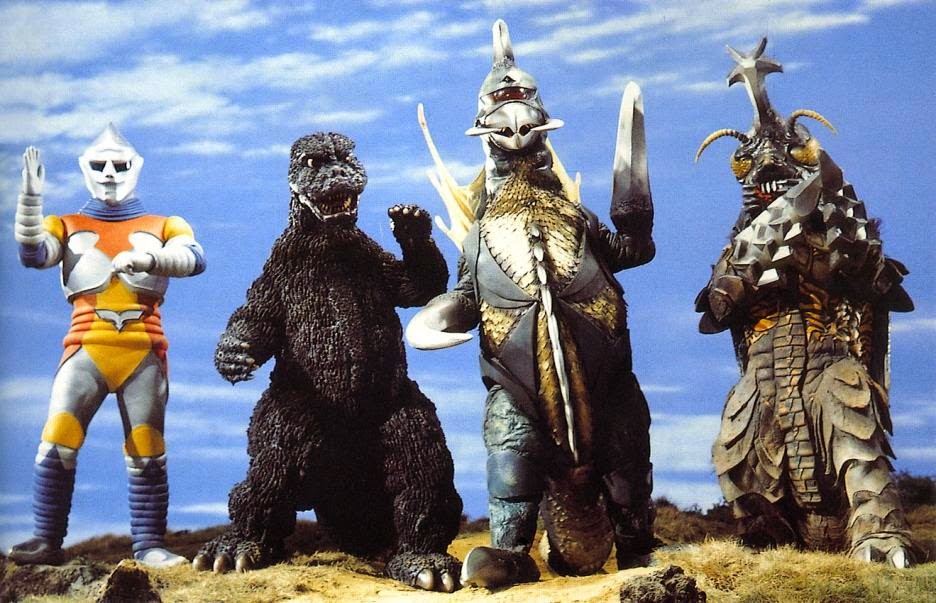 The awesomeness of Jet Jaguar was undeniable.  She still picked fairies over robots, even though his song was rated as more awesome,  leaving Mothra vs. Godzilla as her favorite Showa film.  She did add if the Shobijin were in Godzilla vs. Megalon at all it would be best.