First of all I apologize for being derelict in my duties.  I was busy having a long overdue Up the Lake stay and I missed the Ant Man premier.  I did see Minions twice because it was hysterical.  We finally caught Ant Man and, since Marvel Studios is really good at this, it was awesome - go see it.  It showed they can make smaller films and still set them within, and add to, the grand universe the Avengers  franchise has established.  It was action packed, funny, had some good father-daughter stuff, and highlighted powers (shrinking and ant control) that haven't been done dynamically on the big screen before that was perfect for 3D scenes.

That's all the review there will be for this outing. It isn't less deserving than other movies, its just a timing issue. Marvel may be light years ahead of DC in film quality, and have even been leading them in comic store offerings for quite a while up until a few new launches.

However, deep down in my soul, I'm still more of a DC guy, and there's an important anniversary for one of their icons that I can't overlook. 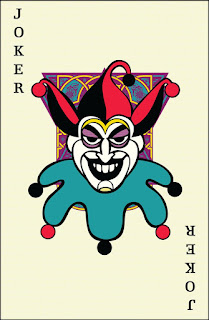 To mark the Seventy-Fifth anniversary of the Joker’s debut ComicBookResources.com has done one of their surveys to generate the list of the character’s top Seventy-Five appearances.

Writers get called out for overusing the Clown Prince of Crime, but I find it completely understandable. I’ve said (repeatedly) that there is no comic better than a good Batman comic.  With that as the starting point his all-time greatest adversary to create those stories is, hands down, the Joker.

There are other villains who are compelling, those who are classy, and those who are sympathetic. But the Joker’s appeal comes from the fact that…as deadly, terrifying and completely evil as he can be…he’s also a ridiculous amount of fun!  Amazingly, though clowns are inherently horrifying, his clown aspect isn’t where the scary part of the character comes from.  For him, that’s usually the fun part!

With Batman as possibly even a more perfect straight man than Mr. Spock, their interactions were destined to be earth shaking. Let’s face it, as much as Batman drips awesome all over everywhere he goes and everyone he meets, sometimes he needs a smack in the patoot to bring him down a couple of notches. 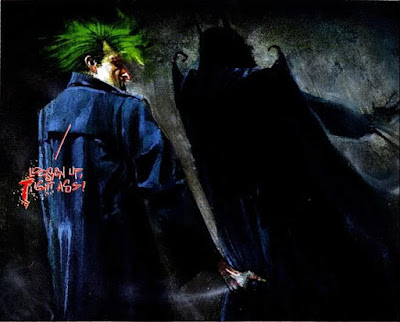 The Joker steals the show in pretty much every adaptation of Batman.  The 1989 movie had far more attention drawn to Jack Nicholson’s take on the villain than Michael Keaton’s interpretation of the title Bat-character.  Heath Leger’s turn in whiteface in The Dark Knight carried that film, and would have been just as celebrated (if not as hyped) without his tragic end. 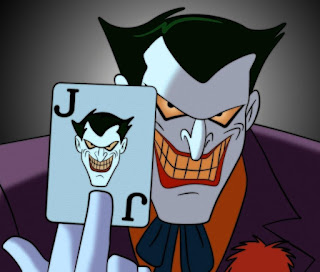 Mark Hamill resurrected his career by becoming the iconic voice of the clown in the Animated Universe and Beyond. (Literally and subsequently) He has many Bat-fans that always read the character in his voice now, myself included.  We’re all salivating at the recent announcement of his return.

Caesar Romero made his mark as the Joker in the 1966 Adam West series, but the character had another impact on that show.  Frank Gorshin’s Riddler was a high point of any episode he appeared in, and was their de facto leader in the movie.  His performances turned a character with less than a handful of comic book appearances into one of the main members of old Batsy’s rogues’ gallery.   At that point, there wasn’t much to define the Riddler from the three issues he showed up in.

Gorshin’s portrayal was much more like the classic, instantly switching from deadly serious to maniacally cackling, version of the Joker, and it’s likely he influenced both villains after the show aired.

Now that I shop for comics almost exclusively by author, the Joker is one of the few characters that a guest shot will lead to a purchase on my regular visits to Funnybooks. (Not counting Nu52 continuity of course.) With the large collection of super hero t-shirts I’ve amassed, the Joker is the only villain shirt I have. (Though I’ve been informed I need to procure another by a certain Latveriean despot.)

Whenever I submit my choices for the CBR lists, I go by pure first impressions.  In other words, it’s the tales that jump to mind without looking anything up on-line or digging into my (probably too copious for comfort) back issue boxes.  The problem with this is I never remember to save the list to use for blog material or even to compare my picks to the final list.  Luckily, the folks at CBR are talented enough to know which exact issue or storyline is meant by generic “the one with” type descriptions.

Since I haven’t done a good comic book post in a while (or possibly ever if you don’t enjoy extended rants about the greatness of olden times compared to current offerings) I made sure to save my votes. The overall appeal of the character was also a major factor in this decision. There’s a much better chance of being a successful shameless self-promotion whore while talking about one of the best known and most popular bad guys of the last century than taking a deep, insightful look into the life and times of the Martian Manhunter.  (That doesn’t make J’onn any less cool or awesome, as we’ll see later.)

I did look up all the issues before writing this, as I’m betting my readers don’t operate from the same knowledge base as those who work at a comic book website. It’s also a big deal for me that many of my picks ranked highly this time around.  My tastes and “random memory” voting method normally means the ones I suggest don’t show up on the website list at all.

My choices were driven by how I was introduced to comics. Before I started collecting regularly, I read compilations and oversize reprints of old Gold, Silver and Bronze Age stories, exposing me to many of the classics before I read what I’d consider “My Comics.”  I started collecting Batman regularly in the late Eighties before my first (of many) comic buying style switches from Marvel to DC. 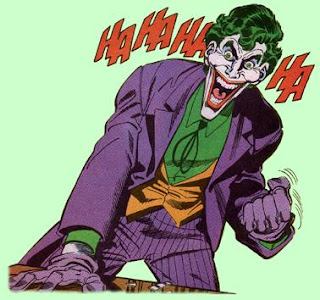 For comic fans playing along, that means I’m a smidge too young to have imprinted on the Neil Adams Batman, and view the somewhat similar Jim Aparo version of him and the Joker as the “correct” ones.

I didn’t consider any Animated Universe comics, because in spite of the fact that I DO read all Joker dialogue in Mark Hamill’s voice, seeing that version of the character without specifically hearing it loses too much. 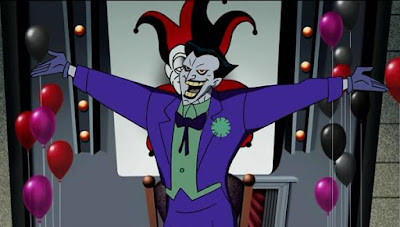 Yup, I’m complicated…
Or strange…
Or off on a pointless tangent once again.

Any-hoo - since this is me running this blog, there are a couple honorable mentions before the top ten list proper begins.

I was surprised when I reviewed my picks and didn’t see any Grant Morrison stories on it, for example: the patoot smacking one above.
(Yes, I don’t even pay attention when I start rambling on about comic books sometimes.)

Considering he’s one of my all-time favorite comic writers, and he’s made illustrious contributions to the Bat-mythos it would seem to be an oversight.    However, what I love about his takes on Batman is that he avoids the pitfall of having the colorful, over the top villains overshadow the Dark Knight.  Though he’s provided outstanding portrayals of the Joker, I think of his work as great Batman stories. 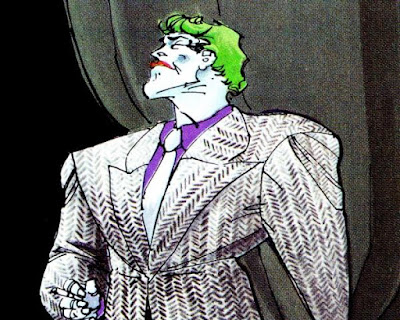 (This is also why CBR#5 Dark Knight Returns didn’t make my list. Of course the Joker would be part of Batman’s last story, but it was still Batman’s story.)  The same is true for Joker’s appearances in Morrison’s famous JLA run.  He was used expertly, as was everyone else, making me remember them more as ensemble outings than “Joker Stories.” 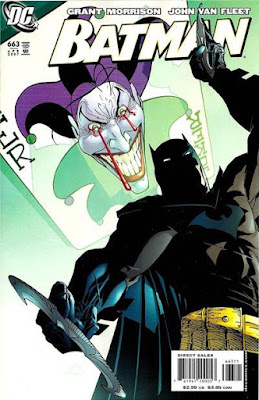 Morrison gets and honorable mention based on his penchant for deciding EVERYTHING is in continuity.  In the middle of his epic run on Batman, 2007’s issue 663 was a prose Joker story that introduced the idea that the Joker reinvents his personality every day, justifying the massive variation in his depiction and lethality through the years. 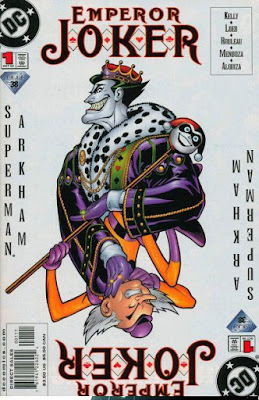 The second honorable mention is because I’m a buffoon and forgot one of my favorite tales in the haste to make a list “off the top of my head.”  It goes to Emperor Joker, (CBR #28) which was woven in nine of the triangle numbers running through the Superman titles by all the writers and artists in the 2000 stable.

I kept seeing these Bizarro world titles under the banner of “Superman Arkham” every week on the shelf. (Now the trades give away the surprise of who’s behind it in the title.) They looked interesting and I figured I’d pick up a trade eventually.  When the Joker was revealed to be behind it I grabbed the whole stack at once, and drove Up the Lake to read it during a late night thunderstorm.  (I’m all about atmosphere when it comes to comics.)

It was an intriguing look into how the Joker would reshape the entire world in his image if he had the power. (Power accidentally provided by another favorite of mine, Mr. Mxyzptlk.) More importantly, it was a look at how Superman could defeat the Joker by outthinking him.  The Joker looked good because of how much he accomplished before falling, and Superman looked good because he was able to pull it off, and also rescue Batman for a change.  In spite of being rescued, Batman still showed his awesomeness by enduring everything he did, and providing inspiration to Superman. 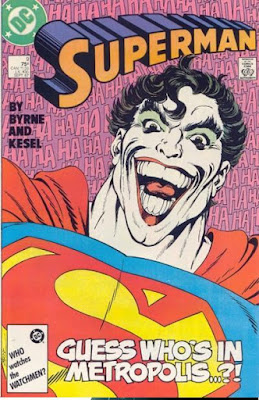 This is in contrast to John Byrne’s Superman Issue 9 from 1987 (CBR #43) where the Joker’s first post-crisis visit to Metropolis was ended by Superman expending virtually no effort whatsoever.  Superman came off as kind of jerky, Batman looked bad by comparison, and the Joker looked equally lame for failing at what he’s famous for, vexing the truly heroic with well-planned unpredictability.