We interrupt the dream stories for this minor question about the new Muppet show. 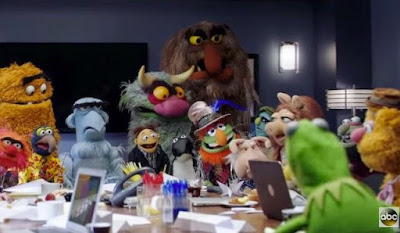 No, seriously, tell me.

Before watching Tuesday's broadcast, I thought that -even with concentrated effort -the Muppets couldn't be made to suck this much.

My entire extended family from second grade up to senior citizen thought it was terrible, and we're a seriously Muppety bunch.

Come on Disney, I know you know better than this.

Disney parks have Muppetvision 3D one of the last performances of Jim Henson and the original Muppet gang.

Disney has shown they know how to run a purchased franchise with both Marvel and Star Wars.

Heck, Disney has shown they understand the Muppets theatrically and on youtube.


I honestly believe you could pull a lost tribesman out of the Amazon rain forest, screen him one episode of the original Muppet Show without translation, and he could still produce a show with a better understanding of what the Muppets are about than this disaster did.

One early specific example, of MANY:

Bunsen tasered Beaker purely to make him scream in pain.

Bunsen does not injure Beaker on purpose.  Bunsen is so wrapped up in scientific curiosity and exploration that he doesn't realize his inventions are somewhere between excessively hazardous and hilariously lethal.

Because the other way is sad, not funny

Even at the height of its explosion and violence filled chaos, Muppet humor always retained an innocence and avoided being nasty.

"Muppets for adults" is a ludicrous idea.
The Muppets have always been for adults, buy the nature of being for all ages. Those with more knowledge or life experience got more of the references, subversive asides and inside jokes, kids (and adults with a proper sense of fun) enjoyed the goofiness at face value.

This is more like "Muppets as boring adults with all the Muppety fun sucked out of them."

I think the fact that the one new Muppet in the opener was the boss's girlfriend from marketing who walks into the writers room and attempts to be funny may be a detailed peek behind the formation of this series.

Zoot isn't in AA.
He's naturally spaced out like that.
Because the other way is sad, not funny.

Traveling on a tour bus isn't bad for Animal because of "too many women."
It's bad because he's likely to eat the bus.
Because the other way is sad, not funny.

(And Animal saying "too many women" is just as insane as Cookie Monster saying "Cookies are a sometimes food," but that's a rant for another day.)

Kermit and Piggy aren't dating not due to an emotionally traumatic break up that casts a giant gloom over their professional and personal lives.
They're not dating because they never were, but Piggy hasn't actually noticed that as she's too wrapped up in herself and her imaginary romance, leading to explosive frustration by the frog.
Because the other way is sad, not funny.

And Kermit saying, "What can I say, I'm attracted to pigs," is a gross violation of "don't explain the joke."
Not in a "'elifino!" or "Good grief the comedian's a bear" running gag, so bad its good, self referential vaudeville style of humor way,
But in a drain all the joy and fun out of the Muppets way.

Because this whole show was sad, not funny.

Yes, I said puppets, NOT Muppets.


Here's a key thing to remember for the next people who try to do the Muppets correctly after this attempt hopefully crashes and burns quickly:

From the very early stuff, like Sam and Friends music was integral to Henson's works.  Starting with Muppet lip-sycnh and evolving into the giant, award winning composer scored, production numbers of the films.

If you've written a Muppet Show, and the only musical number is a truncated bit over the end credits performed by human guest stars- tear up the script before you waste dollar one on sets, crew or equipment, because you did it wrong.

And for God's sake, throw in more penguins!


The only good thing about this travesty was, coupled with Gotham talking turns that removed all my interest in it, my DVR now has room for the Classic Tom Baker era Doctor Who episodes BBC America is airing that introduced me to that amazing show many years ago.

Email ThisBlogThis!Share to TwitterShare to FacebookShare to Pinterest
Labels: Disney, Doctor Who, TV

Thanx for agreeing kiddo. you know Mami and your cousin agreed, and Grandma just sent an e-mail saying the same thing. So that's multiple people in three generations of McGinley's not liking the Muppets.

Could there be more proof that mistakes were made?

Sigh..I was waiting for your review until I watched the show...oh well no muppets for me.

I didn't hate it as much as you but I was certainly put off. The writing was fine but as you note the structure was wrong. They tried to make it seem like they were spoofing the construct with Gonzo's line about saying one thing during the personal interview and quick cutting to saying the opposite during the candid. But then it just went ahead and did a modern sitcom but with Muppets instead of humans.

Another sign was the presence of Rikki Lindhome, FOzzie's love interest. She is hilarious as part of the comedy song duo Garfunkel and Oates. But she is NOT for kids.

The only part that seemed remotely Muppet to me was when Sam objected to the word "Gesticulate". They should have just left it there but then Kermit and he had an exchange that got into sex. Wouldn't been much better to just pun on the sound of the word

Linda, sorry to be the bearer of bad news, Happy to save someone else from a possible soul crushing experience.

Scott, Yeah, I was concerned when the kept using the Gonzo interview in all the clips, 1) Because it meant it was the best they had and 2) Because of it's passive aggressive nature. There's very little that's passive about the Muppets. This whole show they all seemed old and tired.

Using guest stars that are normally not for kids is fine, its part of that two level thing, as long as it remains Muppety. My favorite bit on Muppets tonight was Pepe playing Cyrano to help Bobo win Cindy Crawford...
"...maybe I could play with them sometime."*CRASH* "Shouldn't have said that last part huh?"

Sam had a couple good moments (which as you point out, they ruined by explaining the joke again), so did Tom Bergeron actually, but that does not a Muppet show make.

Thanx much for sharing your insights.

Omg, I loved bob and cindy.
Rizzo the Rat: [feeding Bobo romantic lines via an earpiece] Cindy, to me, you are like the nuts and berries of the forest.
Bobo the Bear: Cindy, to me, a nut like you should be burried in the forest.

the Cindy episode was one of the better ones on the vastly underrated Muppets Tonight. That show also proved they should let the new Muppet performers create their own characters instead of reusing the "classics" Muppets are far more than a voice, the performer infuses them with parts of their own motion and personality. Whitmire's Kermit is not Henson's Kermit.

Reusing old Muppets is playing a role, creating new ones is defining a character.

Thanx for joining in again.

Thanks for the review, Jeff. Was hoping this was going to be good and something to share with the kids. Too bad. Will pass. Looking for funny, not sad TV shows.

On the bright side, the first three seasons of the original show are still available and still magnificently funny.

I haven't watched since the 3rd episode.

Or at least hoping the new visibility gets them to release the rest of the Muppet show seasons. You'd think they'd try to get the Star Wars one in circulation again since they own all the component parts now.