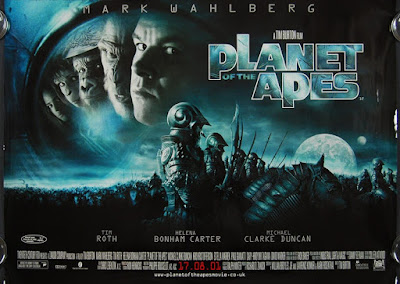 This one veers off topic again, into some parenting recommendations.

As a fan of Tim Burton’s other work, this is the film that sparked her interest in the franchise, and she kept asking to watch it first. I deflected her requests, saying she wouldn’t get all of the references to the original films if she skipped them.

She (like just about everyone else) found the classic films to be superior, and while she enjoyed it, rated the 2001 movie at the bottom of the ape pile.

Sometimes we know what they want better than they do, and we have to be sneaky about proving it to them.

This film does excel in a few areas.  With Tim Burton directing, Rick Baker doing ape makeup and Terry Notary as a movement coach, having this outing be visually stunning was a given.  Throwing Michael Clark Duncan, Paul Giamattta, Helena Bonham Carter, Cary-Hiroyuki Tagawa, and Tim Roth in that make up insured top notch performances.

And hearing Charlton Heston discuss the evils of fire arms is a whole new branch of funny.

While it looks better, it loses some of the ambiguity that makes the originals compelling. The humans are clearly intelligent in Burton’s film, and used and treated as slaves.

The fact that they look human, but clearly act as animals in the 1968 movie prevents the ape society from automatically being wrong.  (And the fact that Taylor blows up the Planet adds a great deal to the “who’s right?” debate.)

The loss of the caste system, where each ape filled a separate section of society, unfortunately removed with it another level of social satire.

I still jumped around for a couple weeks making monkey noises after first seeing it, but let's be honest, it doesn't take much to set that off.

My daughter has seen far too many of this type of crazy film, I guess. She wasn’t fooled by the double bluff “fake Statue of Liberty” for a second. As soon as she saw the spires, her response was, “It’s the ship.”

The final scene proved there’s really no way to recreate the perfect and iconic twist ending of the original.

My daughter expressed about sixteen emotions at once, finishing with, “Wha-huh?” but not in a good way.

Yes, it was closer to the book’s ending, but when you get a studio executive (Bruce Adler) defending the ending with:

"Actually, you're not supposed to be able to (explain it.) If the truth be known, it wasn't really supposed to make sense. It was just supposed to go 'whoa,' make you think. Now is he in another world, did he go back in time, did he get forward in time? The reality is there's no firm answer to that. It's whatever you want it to be. Everybody keeps looking for (the answer), but you've got to remember you just watched a movie about talking monkeys in outer space. Don't look for too much logic, you know."

Even the “key surprise statement” was a reference to the original, and wasn’t executed properly, as we (and Marky Mark) already heard the apes speak before it happened.

“Get your stinking hands off me, you damn dirty human!”

"I still jumped around for a couple weeks making monkey noises after first seeing it, but let's be honest, it doesn't take much to set that off"

Hey Jeff, want some of this banana?