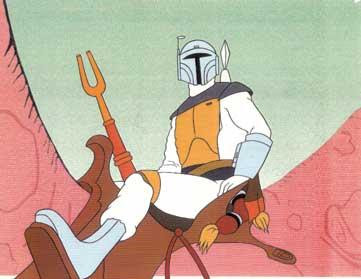 The second biggest problem about the release of Star Wars Episode VII: The Force Awakens (Click here for no spoilers, or here here or here for lots of them) is keeping myself from blowing all my time and money watching it in the theater every day.

The biggest problem, as relatives, friends, co-workers…people I randomly pass on the street…will tell you is- I can’t stop talking and/or writing about Star Wars.

My daughter wanted to see the other films with me again.

This happily removed the idea to fill my obsession by rewatching the movies every night while I exercise.  Luckily I stumbled upon recent Star Wars Cartoons that are acting as an excellent filler of that time. My daughter wants to see them as well, which could have caused a similar issue as her wanting to see the films. However, since I have only seen these stories once, as opposed to annually since I was in grammar school, multiple viewings are less of a burden.

And to be honest, if I didn’t find these shows, watching the films twice in a short period of time wouldn’t be a burden either.

1) It’s a total of seven and a half seasons (and counting) of expertly crafted cartoons that have captured the flavor of the characters and settings of this universe.
2) It’s Star Wars.
3) It’s me!

I believe it was my past experiences with ink and paint club versions of a Galaxy Far, Far Away that kept me from noticing these new ones.

The first animated Star Wars came as part of one of the earliest Expanded Universe pieces on November 17, 1978.  In fact, discounting Splinter of the Mind’s Eye it was the ONLY bit of Expanded Universe in existence. While it’s commonly held that the cartoon in that infamous Star Wars Holiday Special was the “best part” due to the introduction of Boba Fett, one must remember what that “bestness” was being compared to. 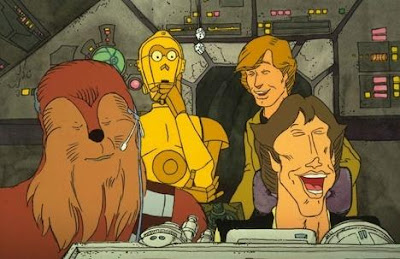 Unless Harrison Ford shares some genetic connection with The Tick, those characters were severely off model.  In fact, the whole notion of that section being the worthwhile part of the special should give all the younger fans a clue how cool the unknown factor made Boba Fett before we saw him as a chortling and eventually sad, lonely child. 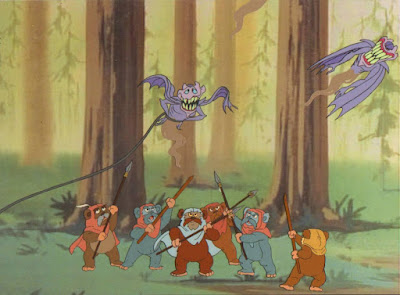 The Star Wars universe wasn’t animated again for almost a decade.  The next entries were the Droids and Ewoks cartoons that arrived in 1985.  Running for only one and two seasons, respectively, the shows had extremely high production values for Mid-Eighties Saturday Morning fare.

Again, relativity needs to be taken into account.  Their mid-eighties competition (after the awesomeness earlier in the decade of stuff like Thundarr faded) was mind bogglingly inane inventions like Turbo Teen: the adventures of a were-sports-car who transformed based on temperature. 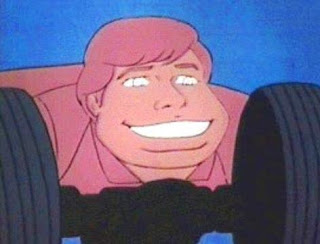 The Star Wars shows were cute and well produced, but clearly aimed at a younger demographic than us first generation fans. 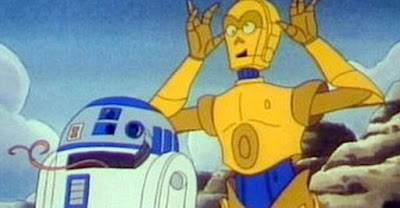 The first Clone Wars cartoon was a series of mini episodes running from 2003-2005.  It featured over stylized animation and took place immediately before Revenge of the Sith.

Because that film hadn’t been released, the show was prevented from any major reveals.

Because each episode was only three to five minutes in length, ramping up to a whopping fifteen in the third season, it didn’t grab my complex narrative loving attention.

Amazingly, while I usually have the attention span of a …what was I saying?

Anyway, I have a great deal more patience for well woven world building and tale spinning than I do for reality.

When I heard they were returning to this period in 2008, it also didn’t catch my interest.  This is why I’m playing vast amounts of catch up now in this masterfully well crafted and entertaining series.

Attack of the Clones gave us the beginning of a galaxy spanning war, featuring battles involving Jedi that didn’t understand group military tactics and a hint of massive scale Clone versus Droid conflicts.

Revenge of the Sith gave us the final moments of that war, when the meshing of Jedi powers and clone combat skills was shattered by Order 66.

Both films gave us a peek at a large number of Jedi, none of which were on screen long enough to do more than look kinda cool, and prove they needed those Troopers to train them in small unit operations if they were going to survive on battlefields.

The Clone Wars series filled the in between time with a large pile of awesome.  It was overflowing with Jedi at the height of their powers commanding genetically designed for combat clone troopers against an ever widening away of battle droids.  Each group received an entourage of ships, vehicles and weapons that were frosting on the blue milkshake.

The creative minds behind this show realized the massive opportunities such a diverse background gave them.  Troops were shown using clever and effective combined arms strategies in both space and land battles.  Each Jedi displayed varied approaches to lightsaber wielding, group combat and diplomacy as fitting their personality and experience. 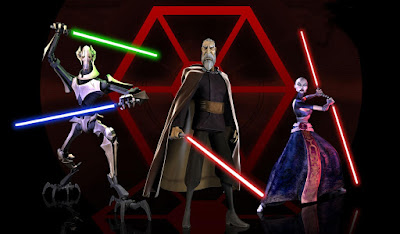 The villains were equally well executed.  Count Dooku works far better as a behind the scenes commander that maintains his dueling skills than an acrobatic flip monkey.  Amazing voice work there as well.  So amazing that when the brought Christopher Lee in to re-dub Dooku's lines when they switched the opening from a TV pilot to a theatrical release, he heard what had already been recorded and asked, "Why do you need me?"  Asajj Ventress plays the role of his Dark Side assassin as befitting a Count who wouldn't always sully his own hands.  Lastly, the idea of General Grevious being a competent coward plays more clearly over multiple appearances, and also adds weight to Obi Wan's final confrontation with him due to their past meetings.

The writers used the full extent of available settings and story types to weave stories over the giant canvas at their disposal. (Or should that be “giant loom?” I think I dropped my metaphor.) 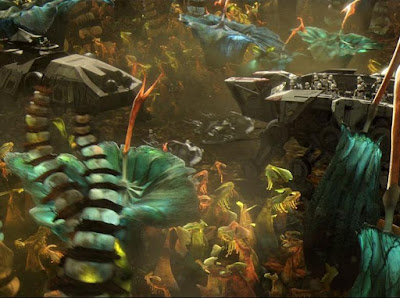 Though somewhat stylized (albeit far less than in the previous show of the same name) the art beautifully showcased the vast array of different planetary terrains and outer space environments only hinted at in the films.

As for stories themselves, they ran the gamut of original and referential ideas, proving yet again that Science Fiction is a setting, not a genre.

In the second season alone there was:

A Hitchockian tale of suspense and intrigue hinting at past forbidden romance.

An homage to the Seven Samurai

A gunfighter becomes a farmer western

And interpersonal conflicts about honor, bonding, responsibility and destiny. 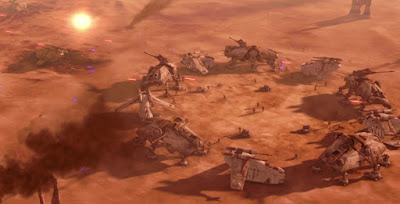 Heck, there was an epic  five parter that started as an espionage tale, became a twenty two minute version of the Longest Day in space with Jedi (Woo!), followed by a covert sabotage mission, an underground zombie adventure, and finished up with Invasion of the Body Snatchers on a spaceship. (I say again…Woo!)

More on the new Shows Next Week!
Always leave em wanting you to shut the heck up about Star Wars already…