Up the Lake: Parental Hike Part 1

The Longish Walk
Or
The Dusty and Winding Road 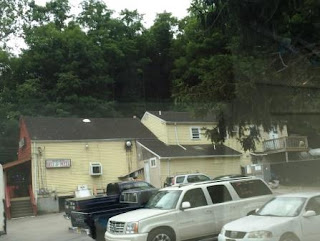 Walking to the Three Mile Stand was an important and regular part of our childhoods Up the Lake.  Similar to most key memory making moments, it eventually and with some regularity turned into a way to force exercise on our children.

Unlike those who sired us, we would always accompany our offspring on the journey.  This is either an indication of how much times and society had changed…

Or an indication that our parents weren’t as keen on raising us all the way to adulthood as they pretended to be when they let us wander several miles down the road out of any contact with them in the pre cell phone era to spend money on junk food, video games and suntan lotion.*

Fortunately, most of the reliable evidence points to the safety reasoning. Since it guaranteed a day away from the beach, it would only be on an extended stay when we’d sacrifice swimming to give our own children a dusty hike in the heat.

We were in full knowledge of that Lake day sacrifice. Yet, we still found it amazing how much convincing it would take to get them to agree to the journey.  This had nothing to do with how eager we were to undertake the trip at their age.  We adventured away from our parents, while our children were forced to have us in tow.  Even to our Up the Lake charged brains, the difference was obvious.

The amazement came from observing our children being in a constant state of wandering, hiking and strolling about any time we didn’t force them to sit still for sleeping or feeding.  Honestly, anything equally or more portable than a drumstick usually required a flexing of the stern parenting muscles to keep them stationary at meal time.  My guess is the prolonged focus on wandering in a single direction is from whence the resistance to accepting our recommended stroll came from.

Considering how staggeringly overtired a normal Up the Lake day made our kids, it shows the level of important nostalgia we attached to those walks that we’d force our children to relive them.

Most evenings, the gang descend into levels of laughing at everything.  Aurora’s contagious giggles sounded the same as her mother’s did at that age, which I was usually responsible for generating back then.  Anabelle’s normally high creativity took a veer into territories even more bizarre than usual as she’d whip up new characters, new games, or a combination of the two.  Morgan usually ended up on a different planet.  Veronica gave one of the best demonstrations of what a long day of swimming, running about, and navigating rocky terrain can do to a child’s mind.

She created an entire song that started:

And continued on for a full twenty minutes with full rhyme and meter, containing a chorus, multiple verses, and full, kitchen filling, choreography.  It became the kid’s anthem for the rest of the summer, as well as replacing the old standard, “We are the Boys and Girls of Indian Lake (You Hear So Much About)” as what was sung during our entire walk.

A bit of historical research into my vast comedy record library and references exposed some unfortunately facts about “We are the Boys and Girls of Indian Lake…” and many other Up the Lake songs.  Most of them dated back to my grandparents and other members of the greatest generation.  It turns out they cleaned up the lyrics of a bunch of old World War II barracks and cadence tunes and gave them to their children to lay claim as their own for Up the Lake.  In that light, a group of younglings belting out about “Patoots” while walking down a residential road wasn’t so bad.

Due to those previously mentioned changes in society, preparations above and beyond us merely intruding on our children’s wandering away from the cabin time needed to be undertaken.

Tracey’s patented method of:
*Knock knock*
“Hi, did you used to have that cute dog Chico with his own house?”
-“Um, yes.”
“That’s cool…can I use your bathroom?”

Had become bygone relic of a past age.

Nick and Skip’s:
“Hey, isn’t that the house we saw the hot girl in the bikini mowing the lawn?
Ring the doorbell and pretend you need to pee.”

Was well beyond consideration for a sensible move when it was first initiated, never mind in later years.
(No, she wasn’t home.) 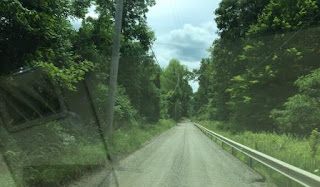 For the first time, all of our brood had passed the age where a stroller was needed on the trip. This was a shame as the mobile battle platform would have helped a great deal as my sister and I packed more cleaning supplies, sunscreen, bug spray, headgear, and telecommunication devices than had gone on all of the trips to the stand in the first seventy five years of  Up the Lake, including drives.

We lucked out in most respects, as my extended stay up there coincided with a dry spell.  We had virtually no rainy days shut in the cabin.  Coloring books and solitaire are fun, but there are limits to how much they can offset cabin fever when everyone is trapped inside.  After a couple wet days, “Go out and run around in the rain,” was not only excellent parenting from a mental health standpoint, but from a sanitary one as well.

The problem with a string of beautiful days is the route down Old Albany Post Road to the stand turned rapidly from “the dirt road” to “a long and winding sandstorm.”

Residents were very protective of their colonial era road.  Mile markers held their locations, in spots dating back to the era lost in the mists of time when it was the main artery to carry mail from New York City to Albany and back.  Also lost in the mists of time is why, in her youth, my sister though those tombstone sized markers were tiny little outhouses…but that’s probably for the better. 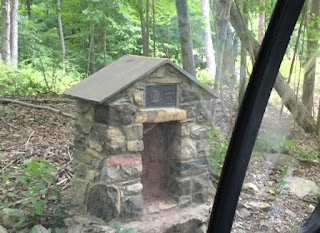 The year round homeowners had signs all along the route saying, “Save our historic dirt.”  They were difficult to read, as the historic dust would completely cover them, the homes, the cars and everything else along the way, muting all colors to an unpleasant, caked on, mustard stain hue.  The ruts, washboards and potholes developing after the slightest rainstorm must have also required axle alignments on everyone’s automobile on a monthly basis.

The most puzzling aspect about those signs is related to that massive road wear.  With all of the washing out, we’d see a truck at least once a year laying down a new layer, which a steam roller would then press into a road like state.  Considering we were only there a little over two months each season, this had to have been a more regular occurrence.  With that heavy schedule of replacement, I tend to doubt how much historicalness their dirt actually contained as we’d seen most of what they were protecting dumped out of a truck while waiting to be flagged through.


*Disclaimer- That was an exaggeration for comedic effect. We walked to the stand alone when we were older than this. Our parents walked us when we were younger.  But without extra gags like that tossed in, this would only be one post long, and I'd be getting even less sleep than I do now.


Up the Lake Index