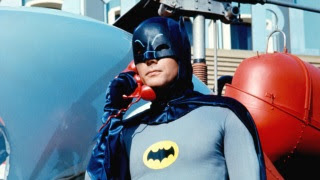 Before starting this week's post, I need to acknowledge the loss of Adam West.

I've talked about him a bunch here and here already and don't have much to add.

He will be missed.

I am extremely happy that, after a down turn, he was able to experience the love of his fans and receive accolades for bringing joy to so many childhoods.  The Batman role may have defined his career, but he also defined Batman.

It may have been in a silly setting, but he was the first actor to bring the supremely confident, always insanely prepared, and totally focused on doing what's right aspect of Batman to the screen. And they've all lasted until this day.

Other actors who played the Caped Crusader may have been in more financially successful or critically acclaimed outings, but I doubt any of them will have a Bat-Signal lit in tribute to them, as Los Angeles is doing tonight at 9PM Pacific Standard time.

I'm thankful you recorded your lines already, and we'll all get one last ride in the Batmobile with you  in the sequel to Return of the Caped Crusaders to take on William Shatner's Two Face.

Speaking of Mr Shatner- time to get back to today's post. 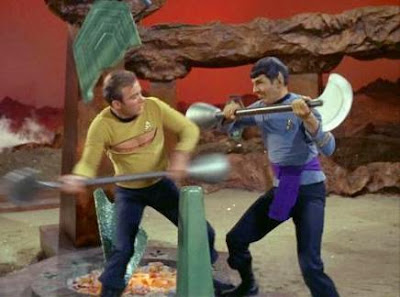 On Chapel and Spock’s pre credit soup interactions:
“What's up with her?
What is up with him?
That is out of character.”

On the new opening credits:
“Bones is there, YAY!”

On Sulu already knowing what happened with the soup.
“That’s kind of strange. Word travels fast on the Enterprise.”

On Spock’s quarters:
“There’s his lute, it looks like a hippie room.”
Later on the Vulcan ritual area:
“They have hippie curtains here too.”

On Spock’s confidential explanation to Kirk:
“Right, confidential. I am going to tell McCoy, duh.”

On Chapel going to Spock again:
“Didn’t he just throw soup at her?”

On the first Vulcan salute:
“I thought they were going to high five.”

On T’pring:
“She wears less makeup then Spock.”

On T’pau smoothing everything over with Starfleet and the Federation:
“Whoah! She rocks!” 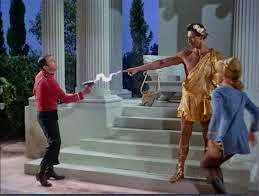 On the bridge crew being assembled:
“Weird, I got used to Chekov not being there

On Apollo’s decorating sense:
“Naked statues…they must be in ancient times.”

On Apollo talking about hardships on planet Earth years ago:
“Yeah, life sucked back then.”

On Kirk informing the god, “We’re capable of a little wrath ourselves:”
“YEAH!”

On Apollo saying none of your toys will function:
“What about the marshmallow maker?”

On the new pop up scanner on Sulu’s helm panel:
“Whoah! That’s awesome.”

On using the astrogator to plot a course:
“Can’t they use a calculator instead of a cardboard circle and piece of paper?”

On Apollo explaining why he stayed by himself:
“Because I’m a lonely psycho.”

On Apollo talking about gods taking mortals to love:
*cough*ZEUS*cough*

On Apollo suggesting they kill a deer for him:
“Wait, what?  There’s no deer on this planet?”

On Kirk telling Lt. Palamas the only thing that’s truly hers is humanity:
“And all your stuff, but we’ll let that slide.”

On the big final storm:
“Um, his dress is falling off.
And why does she have weird pieces of yarn on her head?” 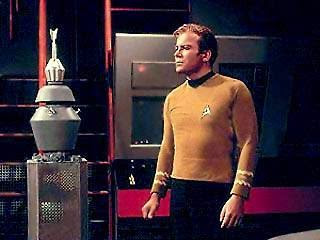 On Kirks’ second attempt to avoid the pre credits attack:
“He said evasive maneuvers the first time and it didn’t do anything.”

On realizing she heard Uhura say something for the millionth time:
“What are hailing frequencies, anyway?”

On Nomad’s noisily extending his probe antennae right behind the unresponsive guard:
“Uh oh not good. How does he not hear that?”

On Scotty getting blasted:
“Poor Scotty that's two episodes in a row…
Dead. What?!
I mean, I know he's not dead he's fine, but what?”

On Nomad asking Kirk if the creator wants him to repair the unit (Scotty):
“Yes! Yes the creator does!”

On Spock's statement, “That unit is a woman,” about Uhura:
*suggestively*“Mmmmm hmmmmmmmm!”

On Spock’s being stuck in the mind meld:
“Whoah, that's not good.”

On Nomad zapping the red shirts:
“Where did he put them?”
Me- “It’s not Charlie, they’re vaporized.”
“Screwdriver's got anger issues.”

On Nomad’s explosion:
“That was kinda cool.  A little underwhelming but cool.”

On Kirk’s “my son, the doctor,” moment:
“Ok then…that was interesting.”