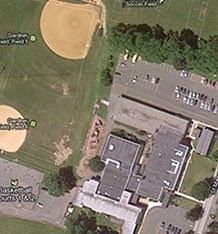 Before I get any further with these, I need to acknowledge the starting point.

I was lucky enough to go to Riverview Elementary School in Denville, which presented me with a parade of excellent teachers.

Kindergarten memories are a little fuzzy.  I do remember that Miss Braybrook must have been a member of the early Seventies culture. She’d bring us out under the trees by the river off of Gardner Field and play her guitar semi-regularly.  Mostly, I recall her singing “We’re Going to the Zoo” by Peter, Paul and Mary.  Being practically raised in the Bronx Zoo, I also remember being hacked off that it remained an unfulfilled promise.

Miss Boney was an amazing Jack of all Trades in First Grade.  She was an excellent teacher, had an operatic, theatrically experienced singing voice, and had a precise and powerful arm.  That arm was used not only as a near lethal pitcher in kickball, but also to send a blackboard eraser hurtling with pinpoint accuracy at the noggin of a certain small boy who was easily distracted by whatever was going on out the window.

Again, some memories are fuzzy, but I know I liked Miss Petillo enough in Second Grade to be miserable with the idea of missing school for a family vacation until she told me she’d be out those days as well.

Fourth Grade had some interesting tag teams.  My teacher, Mrs. Elliot, was experienced and talented enough to oversee and help out the independent study students in her class.  She was also cool enough to have sleep overs with hers and Miss Mako’s (another Fourth grade teacher) classes on two nights (one boys one girls) in her home.  It led to some interesting bonding over The Dukes of Hazard and “Another Brick in the Wall.”  She also connected me with the extremely supportive and more sciencey Mr. Stanton for my photography and special effects independent project.

Aside:  The auto-correct suggested “More Sciencey” be replaced with “Scienceier.”  Congratulate me, I’ve corrupted Word.

Aside inside aside:  Mr. Stanton and Miss Mako coming into school together after they both got their Masters, and later getting married may be the most adorable thing in my education.

The key grammar school grades for me, though, were Third and Fifth.  Those were the years I had teachers who not only put up with my somewhat off the wall style of creativity but actively trained and nurtured it to grow in various ways.

Most teachers would accept (sometimes grudgingly) the ridiculous jokes that I’d work into spelling word sentences, but these two were the only ones who would build on the jokes, offer advice to better package them in my writing, and exchange others with me.

In Third Grade, Ms. Burton encouraged us to focus on our passions, as well as expressing them creatively. I already talked about her using me in a pilot program with dinosaur spelling words, and sending me up to her friend, (and fellow former Miss Boney student) up in the Fifth Grade to give a talk to their class. The awesomeness of the pilot program, assisted by a student teacher she was training, was not connected to its direct visible results. While I know the prehistoric names, my spelling ability on normal words remains so awful that the spell checker often changes languages on me in desperation. (See “scienceier,” above.) It is coupled to the fact that she recognized that there were students, on both ends of the spectrum, which didn’t fit into the standard boxed in categories of learning that school has to be built around in order to work for the majority.  She knew that within those boxes, there is a lot of play to encourage enthusiasm and individuality.  This is why she did such an excellent job when she transitioned to leading Riverview School as its Principal a while after I'd moved on.

I should also probably apologize to her for my handwriting at this point.  Trailing even below my spelling ability, my penmanship reached Jackson Pollack levels of variability and scatter.  She came up with multiple ways to combat this, including supplying me with maze books to help my skill in pencil control.

My penmanship is still terrifying to behold, but I type everything now, and totally rock at solving mazes, so it’s all good!

Her friend teaching in the Fifth Grade was Mrs. Shay.  To, apparently no one’s surprise behind the scenes, I was placed in her class two years after being in Ms. Burton’s.

Mrs. Shay continued to encourage my comedy writing skills along with my education, adding helpful and enthusiastic notes on whatever insanity I chose to put into my fledgling essays. She also put up with my leading off the day by telling her whatever school appropriate jokes I heard on Imus that morning. (Back in the foggy ruins of time, he was both more appropriate, and less political.  I think the reversal of those went hand in hand, for obvious reasons.)

Mrs. Shay was all about enhancing the educational experience with add ons and creative expressions.  For Mother’s Day we had a dinner where we all participated in a talent show. She cleverly worked in a Harlem Globetrotter like basketball routine to give the “too cool to perform” boys a way to be in it.  Obviously, that wasn’t me.  A friend and I did a comedy magic act where we stole many a gag from the greatest vaudevillians.  It was a fantastic way to pull some of the shyest students out of their shell and let them share a passion with the class.

Speaking of sharing, she’s also the teacher that allowed me to pursue the writing, and a group of us to pursue the practicing with a goal of performing (theoretically anyway) my Wrinkle in Time parody play. Anyone who values that level of independent creativity over desks nailed in a row, rote school work deserves special praise.

We had class outside sometimes on nice days as a change of pace.  She also encouraged us all to take ownership in, plan and take on independent fund drives, allowing us to go to the Statue of Liberty for our class trip when the rest of the grade went to a fish hatchery.

Aside from missing the key comedy moment performed when one of Brian and Bobby tripped the other one into the salmon pool, we definitely came out ahead.

In order to have that ownership we had to have class officers before the age where Student Government existed, giving us more practical learning.  I somehow won an officer post using the symbol of a dinosaur wearing the confederate flag.  (Yes…In New Jersey.)

Don't try this at home kids!
Back in 1980, the previously mentioned Dukes of Hazzard wasn't just a show, it was a religion.

After I became a successful Medical Device design and test engineer, Mrs. Shay asked me to come back to her classroom.

Other Aside: There's nothing like seeing teachers after you grow up to realize how messed up your perception of age is as a kid.  They don't look like they've aged much, and yet I've moved rapidly closer to decrepit.

Because the best teachers always encourage your passions.

Thank you Ms. Burton and Mrs. Shay for encouraging our passions, for showing us the outside of the box is the way to go sometimes, and for allowing humor to be the important part of my developing personality it was.

This teacher tribute is for you.