One of These Stories is Not Like the Other

A quartet of views and reviews this week. 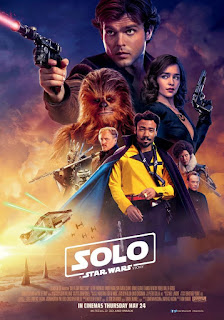 Solo came out, and was a fun ride around the Star Wars universe.  These “A Star Wars Story” films are shaping up to be what the old expanded universe novels were, juiced up on the steroids of a Disney backed motion picture production budget. New characters dreamed up by the creators get the most development.  The characters we know are built “follow the leader” style on what went before, but with some occasional new insights, or “just so” stories. Some of the spoken lines feel like forced repeats, but a fair amount of them are organic. The "new" back story stuff mostly has no effect, with the occasional, "c'mon, really!?!?" and a few "Whoah, cool!"  moments. The non-human established characters translate smoother into the new tale.  By cross referencing other Expanded Universe tales, it creates the illusion of the entire franchise being connected, even thought the elements don't appear in the original source material.  For the good ones, it’s an opportunity to have an entertaining romp through the universe we’ve been fans of since 1977. Solo was one of the good ones, 'cause Little Opie Cunningham don't make bad movies. 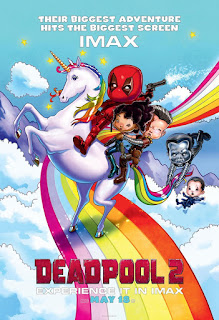 Late Saturday night I was checking show times for Sunday morning and saw they still had availability that evening.  I got there three minutes before the movie started and sat the perfect distance back from the center of the screen.  I and the other nine people had an excellent Deadpool 2 opening weekend experience.  Gotta love living out in Boogers, New Jersey.

I think having a bigger budget than the first one took away a bit of charm of the forced decisions and more extensive non-linear storytelling.  “Art is in the restrictions” – Nicholas Meyer.  However, the sequel uses that budget to go in new directions. While it handles call backs very well, it’s not a rehash, but rather its own story.  Just like the original was internally and correctly called a “love story,” this one is a “family film.”

A family film with wall to wall profanity and cartoonish gore, but still a family film.

That's why I went to see it a second time with my family!

The increased budget allowed for more big battle scenes. I’m not sure I’d say it was “more violent” than the original, but there was definitely more of the same kind of violence.  However, there was less sex than the first outing. (As in, none this time.)  This matched my twisted personal aesthetic for comic book based materials on what should be shown and what should remain between the panels.

Overall, it was still hysterically funny, and packed with ridiculously violent over the top action.  Yet, like the original film introduction of Wade’s story, it had more heart that most superhero films, and balanced the carnage with both tearjerker and feel good moments.

It's amazing how it was able to simultaneously and vastly expand the X-men movie universe, increasing the references to and incorporation of comic book elements, while making fun of it all at the same time. 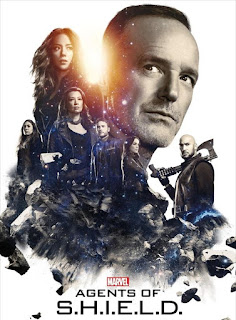 The series nearly ended, and the season did end, on a satisfying if bittersweet note.  I guess with the Infinity War finale possibly occurring only seconds after the show closed out, having it be all smiles and rainbows wouldn’t have worked.  It's been a fun background run through the events of the Marvel Cinematic Universe, while focusing on cool characters and an ever growing amount of the insane parts of the comic book world.  Right at the end, they introduced the Marvel Comics non-linear, alternate timeline theory of time travel.  That’s interesting, since Deadpool 2 went the opposite way with that. I'm looking forward to see how the two franchises finally combine.

I’m thrilled the gang will get a last half a season, following whatever “Avengers 4” is, to hopefully go out on a triumphant note.

I’m, kinda late on this last one, but it’s been rumbling in my head for a while.  There are enough Star Wars references in it to make it sorta fit this post.

In what may be an unprecedented move for this forum, I’m going to talk about an actual good movie today. 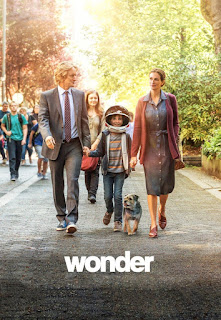 Wonder works as an impressive example of the different ways a book and film can be powerful. My daughter read it for school and it quickly became one of her favorites. Since she was still at the age I was checking her homework, I read along with most of it.

The book has become a beloved best seller, and the ability a novel has to inspire its readers translated into the large number of creative types needed to generate the collective effort of an emotion generating artwork that is a movie.  In a rare case, the author was on set working collaboratively with the film makers, meaning the mechanical changes between mediums didn't destroy the message.

Contrary to many award winning youth novels, this one avoids using horrible tragedies to define itself.  I know I cringed a few times in expectation and saw my wife do the same when she watched it.

“Oh no, that kid bumped his head…he’ll be dead in ten minutes!”

Streamlined and amplified from the novel, the film brings the audience into emotional contact with Augie, his family and his friends.  Using multiple points of view drives home what I latched on to as the most important message to be packaged in this highly entertaining form.

It’s not the message most people praise in this story:  #ChooseKind.

To me, that’s kind of a cop out, and it’s been done before all over the place.

Doctor Who runs on that idea, and Peter Capaldi ended his tenure with an epic speech to his foes that summarized it better than any specific one in Wonder.

“Hey! I'm going to be dead in a few hours, so before I go, let's have this out. You and me, once and for all. Winning? Is that what you think it’s about? I’m not trying to win. I'm not doing this because I want to beat someone — or because I hate someone, or because I want to blame someone. It’s not because it’s fun. God knows it’s not because it's easy. It’s not even because it works, because it hardly ever does. I do what I do because it's right! Because it's decent! And above all, it's kind! It's just that. Just kind. If I run away today, good people will die. If I stand and fight, some of them might live — maybe not many, maybe not for long. Hey, maybe there’s no point in any of this at all, but it's the best I can do. So I'm going to do it, and I will stand here doing it until it kills me. You're going to die, too, someday. When will that be? Have you thought about it? What would you die for? Who I am is where I stand. Where I stand is where I fall. Stand with me. These people are terrified. Maybe we can help a little. Why not, just at the end, just be kind?”

Or, for the short version, there was Tom Bergeron’s excellent reply on Dancing With the Stars when he heard Victoria Arlen was made fun of in school for being in a wheelchair.  He stopped the show, looked right at the camera, and fired off:

“If I could just address kids watching.
If you’re going to school and you see somebody who’s different,
don’t be an ass.”

While noble, the idea that it would be great if we were all kind has been done, and it is way too far on the idealistic side to have constant true practical uses.

I think this story should have a different hashtag…

This is what made the tale really stand out to me.  The notion that for all the hopes and dreams of a world built on kindness, there will be exceptions, and they come in two varieties.

Let’s face facts, some people will always be jerks, and they’ll never choose to be kind.  Through self-delusion, abuse, or encouragement, they’re going to try to build themselves up by knocking others down.

There are two choices with those types. A) Let them get to you and be miserable.
Or
B) Focus and rely on the people who do support you and enjoy life.

The movie showing that many of those people who support you can be teachers is a notion I am a fan of.

What may be a more important point, however, is that there are moments when those people who do support you and who you can normally rely on, will be temporary jerks.

Sometimes it’s due to a misunderstanding.

Sometimes, it’s due to things (or jerks) going on in their life that you don’t know about.

Similar choices then come up:
A) Assume the instance of jerkiness is maliciously motivated uncovering hidden feeling that are always there irrespective of any usual contrary behavior, and enact disproportionate retribution.
Or
B) See the big picture and weigh an occasional jerky moment against the rest of the time when they are there to support and share with you and work together on returning to the normal state of non jerkiness.

Just about every character in Wonder has a jerk moment or two, including Augie and his parents.  But whenever it’s important…whether it be a crisis or a positive event where support and sharing were planned... the family and friends bind together, and work through and forget about the momentary jerkiness.  This is what adds the most to the overarching pile of support, caring, and yes, kindness.

That’s why this film stays with me.  It’s kind of like life.

There are, of course, heartbreaks, tragedies and bad things you can’t change - but if you focus on the positives, and let the people linked to those positives be supportive of you when they try to, overall it's a fun and fulfilling experience.

I wrote the Solo review before I saw it, and didn't have to change a word.

I understand people having problems with it, but it definitely is far from "bomb" materiel.  My daughter claimed it was the adventures of Don Solo and Elmo Calrissian, and that worked for her. Afterwards, she bought into my idea that its an in universe tribute film, made about Han after his passing, where they possibly didn't get all the details right.

Joonas Suotamo nailed Chewbacca though, I guess two films apprenticing under Peter Mayhew did the trick.

I cheered out loud a few times, because it is a  Star Wars film.
Give it a shot.