Here’s some scenes and moments that stuck out to me after a second viewing.


If you haven’t seen it, click here for the non-spoiler review.
Then get going and see it an bathe in the spectacle!


What are you waiting for?
You've probably seen at least some of the other Marvel films leading up to it.
It made eighty gazillion dollars already, someone is going to spoil it for you.

The beauty of taking the time to build up the universe is tiny moments have great meaning.  In the Guardians of the Galaxy reveal to the appropriately catchy “Rubber Band Man” Gamora is signing along.  It's a couple second clip that illustrates character growth and evolution that is only possibly when we’ve had multiple films to get to know the players beforehand. Its not just the stars that benefit from this.  Wanda and Vision’s entire relationship has grown in side scenes of other characters’ stories.  Meanwhile, the main characters’ connections were either slightly hinted at (Bruce and Nat’s connection) or ignored due to different locations (Cap and Tony’s friendship).  My guess is the original six will be the focus of “Avengers 4.”  In fact, for reasons I’ll get into later, they have to be. 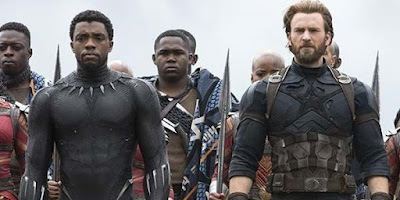 Black Panther showed the Dora Milaje and M’Baku’s Monkey Men were elite fighting units over and above any real world Special Forces.  The shot of Steve and T’challa easily outpacing the entire army and then laying into the enemy hordes while leading from the front was an epic demonstration of their physical and command abilities as a super soldier and magically enhanced king.  It also worked as a bit of an expanded and amplified call back to the scene with the first super soldier seen in the MCU, Emil Blonsky in the second outing of the franchiseThe Incredible Hulk.  The technology has come quite a distance in showing what “peak human potential” looks like.  It’s not just that Cap is as good as an individual Olympic athlete, it’s that he performs at peak POTENTIAL human levels, in ALL areas. 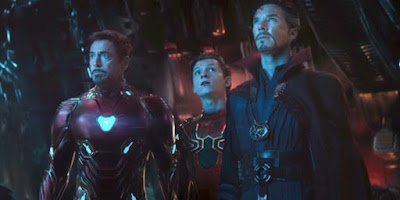 They threw in a fair amount of subtle but still very cool “show don’t tell” super powers.  It took my second viewing to catch that whenever Thanos used the gauntlet, the proper Infinity Stones for whatever power he was using lit up.  From the comics, Mantis’s cosmic awareness, Peter’s spider sense, and Doctor Strange casting the Crimson Bands of Cyttorak spring to mind. Having Wanda’s powers be simultaneously super strong, yet poorly defined also matches her years of comic book history.  Strange was a much more varied Master of the Mystic Arts in this outing, going further than simply creating magical melee weapons and mixing anti grav parkour with hand to hand. And while I’m mentioning Ditko drawn Marvel characters, seeing Spidey’s strength up where it should be was also very welcome. The guy can press nearly ten tons, and they showed why it coupled with his beyond human agility and spider-sense makes him one of the most formidable combatants in Marvel. However, the storytelling skills the franchise has mastered, and Tom Holland's acting ability (He goes through a half dozen emotions in seconds when Tony "knights" him into the Avengers.) anchors the reason we’re drawn to the character to that he’s just a good hearted boy trying to do what’s right dragged into insane situations.  This also made the “don’t want to go” demonstration that he really is just a kid much more devastating. 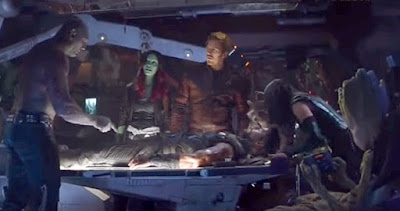 This film was a heavy one.  There’s no getting around the dark ending of a Thanos victory that eliminates half the universe. Especially as my daughter put it, "More than half the people we actually care about."  Yet the story was filled with humor along the way.  This is why the timing is perfect for having the Guardians of the Galaxy join the mix with the Avengers.  The cosmic adventures of those characters have included many of the goofiest, laugh filled moments in the MCU.  However, they’ve also had some of the saddest, heart wrenching tragedies as well. Those films work on opposites. Though they have the most cosmic setting and super power levels, they’re really about family.  The dichotomy continues in Infinity War.  Mantis’s hilarious “mean face” came seconds before the destruction and death toll of the Asgardians appeared on screen.  I can’t believe they made me cry over the death of a talking tree twice now.  The mix of comedy and tragedy presented how Super Heroes follow mythological arcs and functions in our modern society.

Thor: Ragnarok highlighted the comic book style Hulk in ways we haven’t seen on film before. YAY!   Infinity War was much more of a Bruce Banner film.  He’s frequently referred to Hulk as “the other guy” and seeing him stuck in the reverse of his usual situation was interesting.  All the years of living in fear of his transformation got turned on its head.   Watching him pilot the Hulkbuster armor had two nifty parts to it. The first is its sort of a shout out to the times the Fantastic Four’s Ben Grimm reverted to human and went into battle wearing a Thing suit. The second, and more important for a character arc, is seeing Bruce revel in the power and strength of piloting “Veronica.”  It may lead to the revelation that those who know Doctor Banner best in the comics bring up semi regularly: That the “other guy” is just an aspect of the same guy, and once Bruce embraces the “angry little boy” within him, they’ll make an unstoppable combination.  Tony did point this out in the original Avengers and he has been shown to have the closest friendship ties to Bruce. 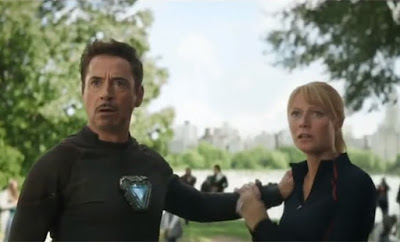 Tony has been the focal point for much of the storytelling as he started the MCU. As super powers have expanded, so have his.  His armor has followed the same evolution it did in the comics.  Early on, it kept him alive and was constantly running out of power, endangering him more than his foes.  Later, it was his own faults and addictions that created drama in the story, while the armor was basically magic, with a handy helping of upcoming technology buzz words thrown in. Honestly, in the early Sixties, explaining the minor by today’s standards abilities of the suit with “transistors” was pretty close to magic as well.  The Nanotech armor does pretty much whatever he needs, but having an arc reactor reinstalled on his person, shows his continued addiction to the idea that being a  superhero is "fantastic."  Then again, wearing a suit that let him survive having a moon thrown at him (THAT WAS SO COOL!) is worthwhile in his line of work.

Speaking about power levels, how about everyone’s favorite thunder god?  Thor withstood the blast of a star to create his new weapon, and then appeared in the cinematic version of many of his tide turning comic book appearances.  Bruce’s “You guys are screwed now!” yell carried the same weight as famous printed Thor reveal moments such as, “Ultron, we would have words with thee.”   It was great to see his strength and powers where they should be, after him starting off his first film being knocked over by slow moving vans and hand Tasers.  While he did completely turn the tide of battle and almost single handedly insure the armies were routed and demolished, he did not bring about total victory.  This is due to the nature of the team and Marvel in general. 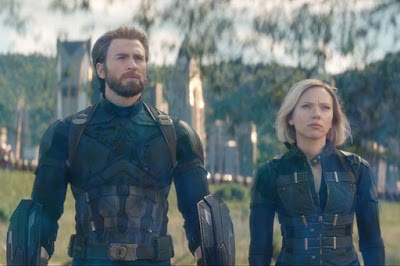 The reason behind the heroes' loss is connected to another member of the Avengers “big three,” Captain America.  Steve was playing a role similar to his comic book time as “Nomad, Man without a Country” or when he was simply, “The Captain.”  In both cases he was disillusioned with the American government and separated from it to continue to promote the American ideal.  With the close ties of the Avengers to SHIELD and the government in the movies, he’s disconnected from the team. As goes Captain America, so go the Avengers.  Even when he isn’t the chairman, there’s something about his presence that gels the team, and he takes the role of field commander during others chairship.  The West Coast Avengers comic showed this even though he wasn’t a member of that group at all. Hawkeye took point and was constantly comparing himself to Cap, forming a quality team by trying to live up to Steve’s example.  Captain America never compromises his beliefs as shown in his solo films. Chris Evans plays the part with Christopher Reeve levels of hope, optimism and inspiration. (Praise I do not give lightly.) Thor’s films showcased the nature of the Marvel Cosmos which is why he interacts the best with the Guardians, Iron Man’s showcased … well…mostly Tony...because he's Tony, but Cap’s showcased the state of the Avengers. I’m sure him finding the way back to return to full “Captain America,” will be what leads to everything working out. (With some help from the Time Stone’s stint as a star, of course.) One thing the Marvel films have always contained, even in the darkest hours, is insurance that there’s a glimmer of hope. 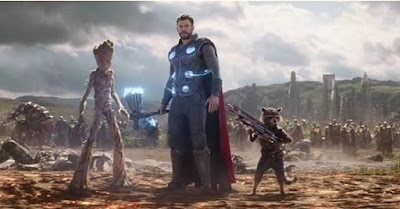 There is a reason the Avengers team must gel for success, and that Thor’s appearance didn't lead to a Superman arrival like complete victory that happens in Justice League stories. It goes back, again, to Kurt Busiek’s excellent analogy of the two teams. The Justice League is the All-Star Team- the absolute best of the best DC has to offer, a pantheon like group of individuals that are each the top in their area. The Avengers are a championship team, and it's the way they practice, work and interact with each other that makes them Earth’s Mightiest Heroes.  After Civil War the Avengers are not Assembled. Note that this film lacked the slow motion, theme song swelling moment of all of them together that the first two had.  That more than any action on the part of Thanos, his gauntlet and his armies, is what led to their defeat.

Speaking of the DC characters. This was basically a reverse Batman movie.  In all the films starring the caped crusader, the villains are the most fun characters, who get all the best lines. However, since its Batman’s film, we follow his story and he is triumphant.  Advantages of having a well-developed, interconnected, and progressing fictional universe, is you can give the villain his own movie allowing him to be a fully developed, and while not sympathetic, a more understandable character.  This was the story of Thanos, the explanation of his goal and how he achieved it. However, before that series of particularly devastating moments of achievement, it was the super heroes who were the most entertaining.


And I’m sure they’ll do some heavy caliber Avenging next May once they truly Assemble.
Posted by Jeff McGinley at 2:00 PM