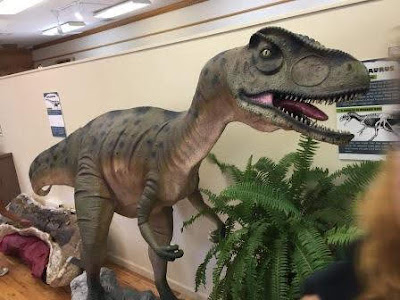 Spending any longer in the Rockies, home of fossils sticking out of the freaking ground, and not having seen any dinosaurs yet was going to be a problem needing rectification.

We got ready in silence while Titi Luzma worked at her translating job, and drove out on the highway past the tiny lake that had power boat pulled water-skiing, and presumably more than seventy percent oil slick content, on the way to fix this. 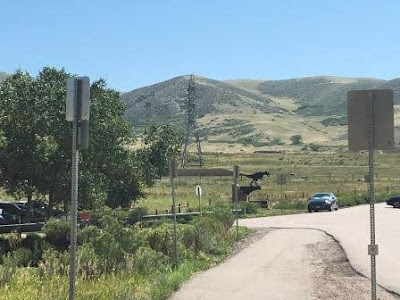 Our first adventure was the hike up Dinosaur Ridge, a place that has fantastic views even if the prehistoric remains are discounted. 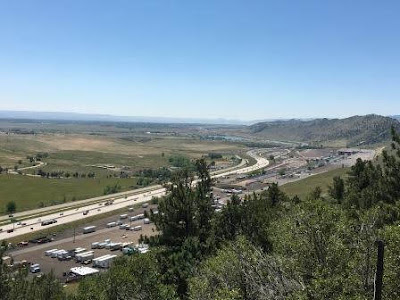 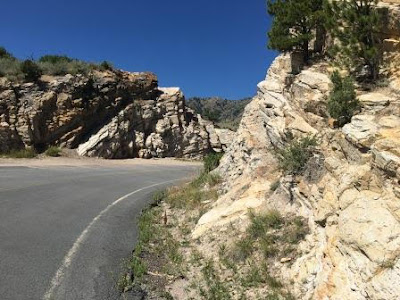 Annoying companion that I am, I insisted on crossing the street this time to read a sign I’d missed on other trips. 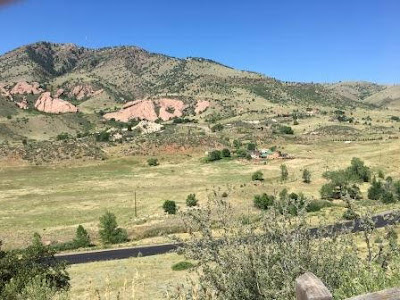 The famous “Red Rocks” in the area are pushed up from a much earlier period. They’re one point seven BILLION years old! Whoah! 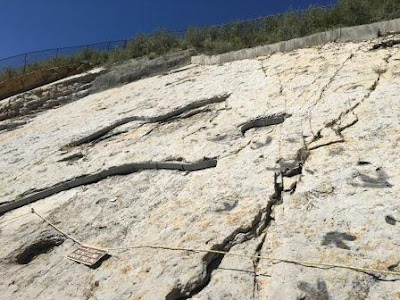 At the far end of the trail, we could see a sign for a Discovery Center, but not the center itself. 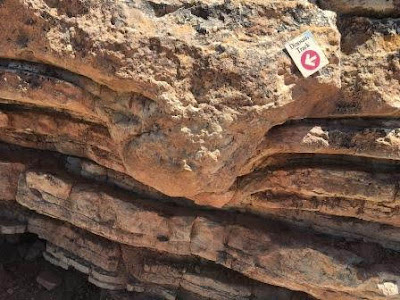 We figured it would be the same as the base museum and trekked back past footprints, bones and other coolness. 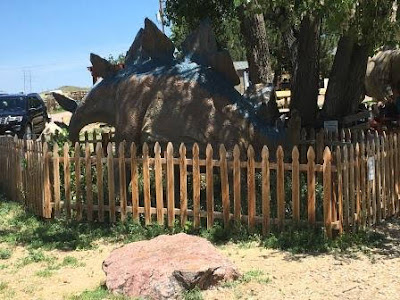 The dinosaur gift shop was an awesome stop for us, of course. Rosa got herself a dinosaur mug to help learn the names, Anabelle got some egg toys, and I added to my Carnegie Collection with a couple interesting specimens, who were all coincidentally doing “big arms.”

Another awesome thing was the little museum there.  It was tiny, but packed with fun helpful people who loved dinosaurs as much as we do.  We learned from one of them that the Discovery Center on the other end was different and had a feature that made it his wife’s favorite. 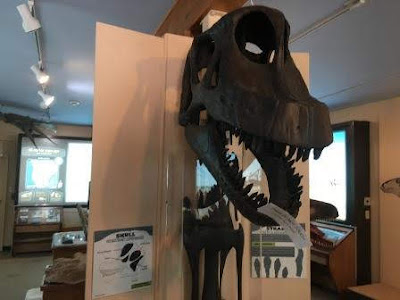 We drove over to the Discovery Center, passing around the back side of Dinosaur Ridge, and making many jokes about Dinosaur Backsides.  So much for the educational content of the day.  They had a different small museum, with some scale models, a real diplodocus leg bone (woo!) and another small gift shop. 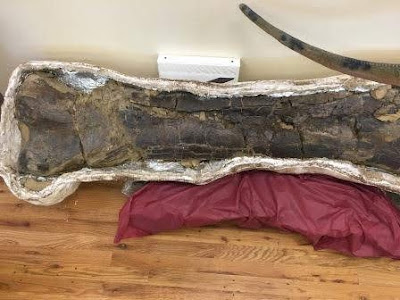 They were showing a well-made and informative Spinosaur video in an area with a little stage they used for kids’ presentations, but didn’t appear to sell it anywhere.

We also made use of the key feature the guy in the main shop told us about: flush toilets!

Instead of heading straight over to the nearby Morrison Museum, we followed up on the lunch discussions and decisions that were frequently interrupted by Dinosaur Backside jokes.

Titi Luzma told us that it was still worth going to El Rancho.  It had closed down and reopened as a microbrewery. While they no longer had a vast variety of game meats on the menu, they still featured Bison burgers.  On the way we saw clearer evidence, after the 3 Margaritas parking lot fiasco, that Siri might be partaking in the local herbs.  We got off the exit just past the Buffalo Overlook, which managed to overlook having any Buffalo at it any time we passed.

All of us could see El Rancho, but Siri told us to turn behind it instead of on the main road in front of it.  Believing there was no entrance on the main road, we took a bizarre, twisty and deeply forested tour up the residential mountain behind the restaurant, before giving up on our electronic guide and retracing our path to the large and obvious entrance to the parking lot in the front of the place off of Highway 40. 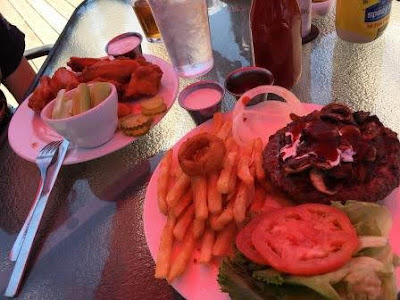 The impressively tattooed server sat us outside where the gorgeous view accompanied an outstanding lunch.  Anabelle was in the mood for wings, and picked a large sized order knowing we’d likely share her mood.  Rosa and I tried the Bison burgers. Whatever “burgers must be cooked to briquette crunchiness” law was no longer in effect, and I reminded Rosa she had to ask for well done even when they recommend against it. “As rare as you legally can” brought me a pink juicy burger just shy of mooing.  My "leave me alone I'm on vacation" sampling of the fries and onion rings showed they also matched the quality of the main courses. 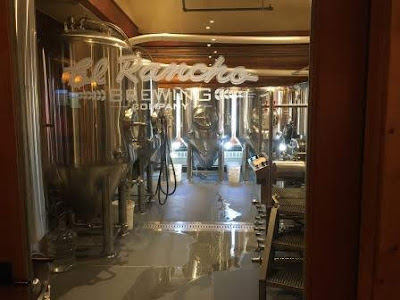 They had a vast list of beers and a blueberry and saki infused one sounded particularly tempting.  Since I was driving my family around to sightsee in a much thinner atmosphere than I was used to, I passed on trying it. 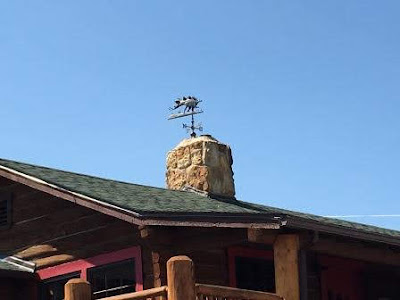 Our bodies happily fed, it was time to feed our minds more at the tiny yet awesome Morrison Museum. 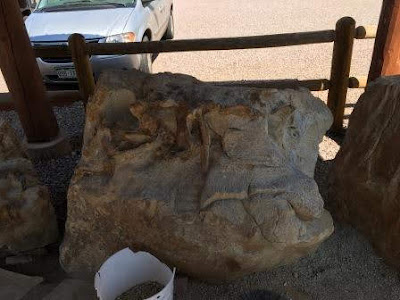 The best part of the working paleontological location, was talking to the volunteers that made it “working.”  Outside there was as guy extracting dinosaur fossils from one of the rocks shipped back from a dig. How’s that for an awesome beginning before we entered the place? 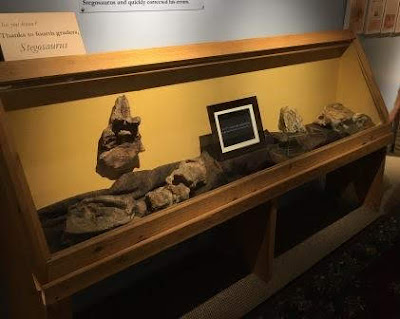 The exhibits hadn’t changed and were still (yup) awesome:  some casts, the smallest and second smallest dinosaur footprints ever found, proof that baby sauropods walked on two legs, and the fist stegosaur bones discovered in history. 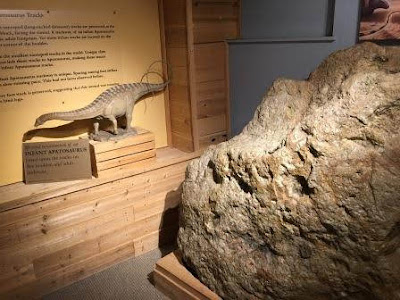 And that was just downstairs.  Upstairs had more, hands on stuff, casts of extinct mammal fossils, and some living reptiles. 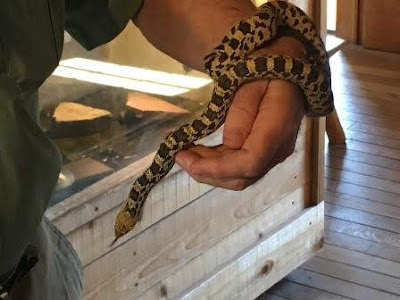 In our continuing montage of zoo death, we learned their old large snake died.  However, the new smaller ones they had needed excessive petting time to become acclimated to visitors. We were happy to oblige.

The best parts, as always were the tour and talking to the guide, as each one has separate interests leading to cool and varied highlights.  We learned the very first Apatosaurus was found in a spot visible from their parking lot! Whoah! 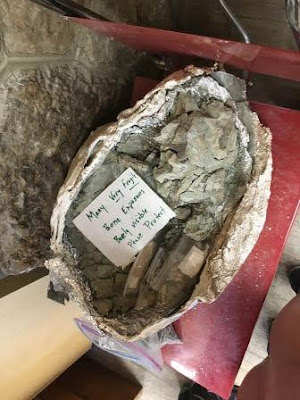 We also learned multiple cool facts about the Apatosaurus skull they have been meticulously extracting in the upstairs room since before our first visit over seven years previously.  We knew it was one of only seven found, but this time we discovered: 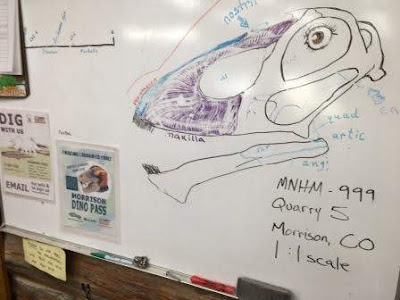 1) It's the only one of a specific subspecies.
2) It was found in Dinosaur Ridge, where we’d been that morning for those with short term memory issues.
3) Its name was Kevin!

I ended up chatting with the tour guide and another father and daughter that were on the tour about Doctor Bob Bakker. He wasn’t there this time, as he was off digging up Dimetrodons (Woo!) in Texas. 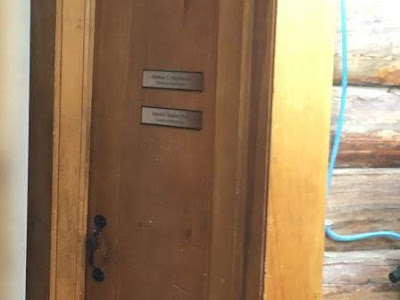 I explained, as I always do, how The Dinosaur Heresies blew my mind and made dinosaurs awesome again. He mentioned some of it was outdated but it still had great presentation.  As the conversation went on I brought up Raptor Red, Dr. Bakker’s novel written like a nature documentary about dinosaurs.  It turned out the young lady in the other family was a giant dinosaur fan and was writing a similar story about a Tyrannosaur.  She enthusiastically greeted the information that there might be some signed copies in the gift shop.  Her dad thanked me for recommending it and I was down there when she excitedly found one with an autograph.

All around, a fantastic day for sharing dino-fandom.

On the infinitely tiny chance that young woman ever sees this: I want to read your story.

Next we drove over to Golden, Colorado to walk the “Triceratops Trail.” Since we had been there before we knew we would not end up driving in circles for a while before wandering aimlessly around looking for the trail head. 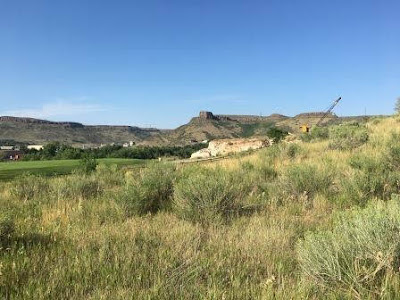 Thanks to a combination of a new fence, the parking lot we used last time being paved, and Siri partaking in the local herbs, we did anyway. 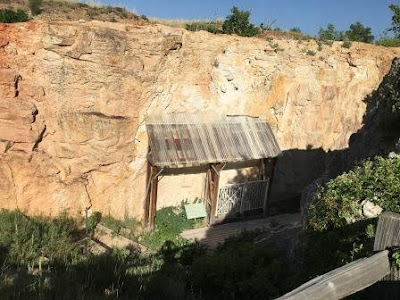 We saw the footprints and impressions, as well as finding Carrot the bunny in exactly the same bush by the Tyrannosaur print. 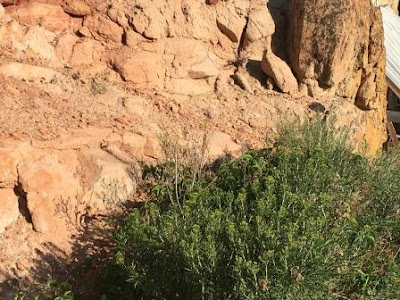 Anabelle was in a rare posing mood, and took many photos; including several “Hills are Alive” type ones. Even with those pauses, it was a much shorter walk than we remembered.  Knowing where you’re going always shortens perceived travel time.

There was no change in the ending of the trail at the “although we have dino footprint shaped sand traps you can’t trespass here” memorial golf course. 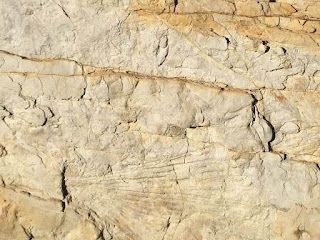 Therefore we turned around, after watching a couple lunatics parachute off a mountain, and I made the obligatory “With fronds like these” jokes next to the plant imprints. 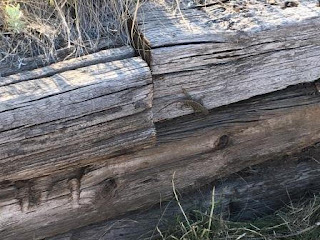 We had another encounter with Carrot, as well as a pair of Lizards and a metric crapload of Ants, completing our animal reruns for the trip. 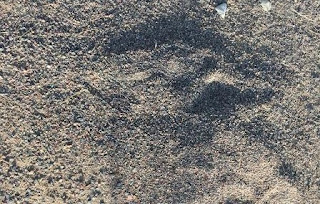 At the pool for our usually nightly dip we met a mother and son who were there visiting his father.  We had walked in the heat enough that day, leading me to decide to enter the pool for the first time and swim around a bit.  Naturally as soon as I got in, we heard panicked calls from our new friends.

The mom had gone into the labeled bathroom to change and her son went into the unlabeled room across the way.  It had been locked up other times we were there, and we learned why.

While it was a bathroom, the door handle didn't work and he got stuck inside.  I stood on a chair and talked to him through the small window, but he and my arms were just short enough that the best we could hope for if he jumped was snapping my elbows backwards like a Steven Segal film.

There was a guy at the pool who was far more concerned with the fact that we were all “unaccompanied guests” instead of residents than a panicked, trapped child in a rapidly heating confined space.

Captain Rudeness finally, and grudgingly, agreed to go try to get a key.  He returned failing at this mission and Uncle Roy and Titi Luzma showed up in the meantime.  I couldn’t see the door handle from the window and initial indications were that the lock was stuck.  Fortunately, his mom climbed on the chair I was on to talk to him and when I was down I could see that the handle outside would wiggle slightly, but more than it could if it was locked, when he tried to open it from the inside.

Yes, when he was looking at the outside of the door and giving us crap about unenforced pool rules that were inapplicable (the son was a resident), Captain Rudeness never tried the handle as the kid was moving it all around in front of his rule spouting face.

When I pointed this out, Captain Rudeness did try the handle and opened the door.

We then sat around the hot tub together and talked about local sites and got to know each other better. (No, not him. Captain Rudeness went home.)  The mom knew someone at the zoo, and told us Sloth training time was at Three PM.  When we went home and checked plans for other days, formulations were occurring.  These formulations involved not wanting overnight stays away from our relatives for some of the longer trips, and a return to our new Slothy friends.

The son also pointed out that my sun charred skin completely overwhelmed the dyes in my Tiger tattoo and I should get it inked again.  Helpful lad.

In celebration of the new plans there was a Sloth and Eeyore dance show in the basement that night, before a couple of rounds of pre bed time Uno.

Congratz on the ...um...advancement I guess.
Thanx for reading and sharing in the dino -fun!